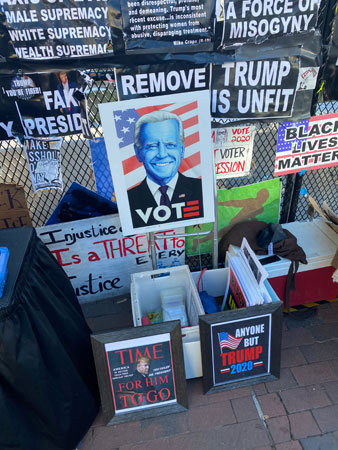 As I write this piece from the suburbs of Washington, DC, America is going through a tumultuous period which could change the course of its history. With a razor-thin lead achieved by former vice president Joe Biden, the elections are far from over since counting is still underway. At the same time, President Donald Trump is repeatedly expressing his displeasure over alleged ‘electoral fraud’ which seems to have no grounds given that it takes several days for votes to be counted in some states. His team’s decision to go to the courts hasn’t turned out well for him. Moreover, his insistence that the elections were over on 3rd November are against the norms of democracy which were also flagged as misleading by social media platforms such as Twitter.

Five states, including Georgia and Nevada, have become pivotal in deciding the outcome. In three of them, the Republicans have a narrow lead with the Democrats catching up fast. While a Biden victory is likely projected, it is too early to say anything as it all comes down the electoral college where Biden has 253 and Trump has 214 votes as of now.

I happened to roam around the BLM tribute area outside the White House where people were unanimous in their support for Biden-Harris campaign. Unsurprisingly, not a single Trump-Pence supporter was found there.

But what it does signify is how polarised America has become with liberal and conservative values colliding with each other in one way or another. When dissecting the views of conservative Americans, their stance is more or less aligned with anti-minorities views yet claim to be deeply ‘religious’. Notably, Neo-Nazis who use fault-lines to sway conservative opinions have the potential to cash on the situation for sinister purposes since they are invisibly embedded in the society. Their support for the Trump-Pence campaign is the reason America’s standing has fallen in the eyes of the world.

Trump’s rise is a product of racial and xenophobic politics fuelled by the upper echelons of the society. Of course, the questionable role played by an aggressive US foreign policy in the last couple of decades can’t be shunned.

America was supposed to be the land of opportunities and immigrants where cohesiveness and tolerance were supposed to make it an ideal state. But its transformation into a semi-dystopian state and picking unnecessary fights thousands of miles away have reduced its global stature as a leading superpower.

China’s rapid rise and Russia’s resurgence are some of the factors that America realised too late in the ever-changing global order. Both of them are authoritarian states which America chose to follow in some way and hurt its own democratic values.

In terms of technology, social media’s mass weaponisation has essentially proved destructive for not only the rest of the world but Americans themselves. Some sections of the society being gullible were easily prone to mass disinformation campaigns and COVID-19 is one such example which proved costly in this regard.

Should Trump lose the elections, his shadow would haunt America for a long time to come and the Republicans shall have a hard time detaching themselves from him. His eccentric demeanour may be a form of entertainment for most of us but his actions over the last three and a half years have damaged whatever respect America had left. He not only antagonised minority groups such as Latinos, African-Americans and Muslim-Americans but also the world at-large. From Europe to Asia, his actions and words were unwelcoming. Even the Iranians, who managed to reconcile with the Obama Administration, wish for his ouster from office.

But the bigger question remains is whether Biden would prove to be healing touch for America’s domestic and global standing? Learning from mistakes is what leaders owe to their supporters and this is the ripe time. America cannot afford further divisions and it must come out the shadows of darkness for the betterment of the Free World.