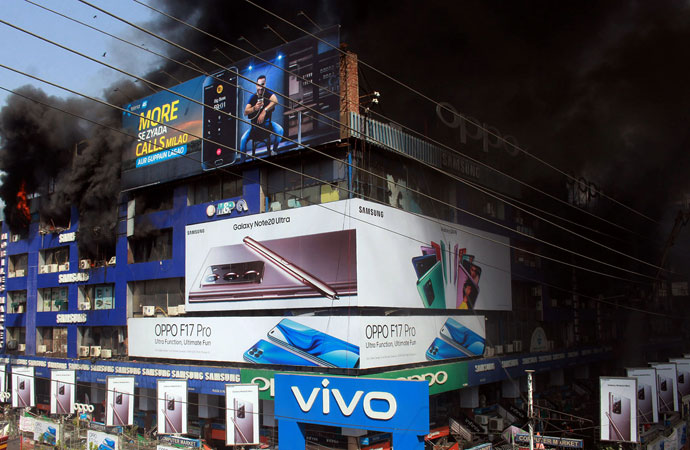 A massive fire was erupted at Lahore’s famous mobile phone plaza Hafeez Center while causing hundreds of millions of loss to the businessmen as a large number of shops were reportedly gutted into ashes. The horrifying fire started from the second floor of the famous plaza and moved upward while damaging the other floors as well severely. The massive fire was also seen spreading towards the other adjacent plazas but it was contained due to the timely operation of fire-fighters.

Hafeez Centre is a famous commercial market of the city that hosts more than one thousand shops in the five-storey building. Situated in Gulberg area, Hafeez Centre has business of mobile phones, laptops, computers, UPS, batteries and other accessories related to the electronics while thousands of people visit it on daily basis. As per some initial reports, 40% shops are completely damaged while causing millions of loss to shopkeepers.

As per the details, the Punjab Emergency Service Rescue 1122 received the fire call around 6 am in the morning. It was completely a developed and matured fire when the rescuers reached on the spot. As many as 25 fire vehicles, three special vehicles and over 70 rescuers participated in the operation as backup teams were also called.

It is worth mentioning here that 25 people were trapped inside the plaza when the fire erupted but all of them were evacuated safely. There were no customer or shopkeeper present there at that time due to weekly holiday of Sunday. No causality was reported till the filing of this report. Majority of the trapped people were the laborers working in the plaza for transporting the goods. They took shelter at the rooftop before being rescued by teams. Later, the fire was reported to be moving towards the first floor as well.

The fire was so massive that the clouds of smoke were seen from a long distance. A large number of shopkeepers rushed to the spot as the news of fire was flashed. They were literally crying while also praying to the God. Few of them also started reciting Azans for seeking mercy while seeing the magnitude of the fire. All the building even the rooftop was filled with thick smoke. The high flames were also rising up to the rooftop making the scenes horrible.

Rescue spokesperson Farooq Ahmad said that the fire was massive because the plaza was filled with the highly inflammable material. He also said that no one knew at what actual time the fire started. He further added that the rescuers in their day long operation stopped fire from spreading to first floor, basement and the backside of the plaza. He said that the cooling process continued for an indefinite period as decided according to the situation.

The explosions in the building were also heard reportedly due to compressors of Air Conditioners, UPS batteries and other such materials. A heavy contingent of police also reached the spot to ensure the law and order situation. SP Model Town Dost Muhammad Khosa reached in the morning while CCPO Lahore Umer Sheikh and DIG Operations Muhammad Ashfaq Khan also visited the scene. DG Rescue 1122 Dr Rizwan Naseer, DC Lahore Mudassar Riaz Malik, Commissioner Lahore, Additional Chief Secretary Home Momin Agha and other officials also visited the scene to review the rescue operation arrangements. Punjab Health Minister Dr Yasmin Rashid also reached the spot along with senior bureaucrats. However, she was received in a very hostile manner by the shopkeepers present at the sight. They started chanting anti-government slogans when health minister reached there.

Meanwhile, the Punjab government formed a fact finding committee comprising of at least 14 members while Deputy Commissioner Lahore will be its convener. The other members include Assistant Commissioner Model Town, SP Model Town, Chief Engineer Buildings Central Zone, District Emergency Officer Lahore etc. The committee has been directed to submit a preliminary report within 24 hours. It will ascertain the underlying causes of the fire incident, determine loss of property, examine infrastructural stability as well as assess the efficacy of emergency response by the concerned department. Rescue officials said that the initial survey suggests the fire broke out due to a short circuit.

Moreover, the Lahore Chamber of Commerce and Industry (LCCI) strongly condemned the huge financial loss caused by the fire. President LCCI Mian Tariq Misbah, Senior Vice President Nasir Hameed Khan and Vice President Tahir Manzoor Chaudhry condemned the fire at Hafeez Center and expressed sorrow over the loss of property and demanded from the government to compensate the traders. They said that they stood by the traders of Hafeez Center and would raise their voice at every forum and would strongly demand the government to correct their losses by identifying them. He said that Hafeez Center is an important and big commercial center of Lahore in which small and big traders do businesses, it is impossible to recover from the damage caused by this fire. Lahore Chamber of Commerce and Industry (LCCI) urges the government to formulate a strategy to determine the cause of the fire as soon as possible and to compensate the traders, they said.