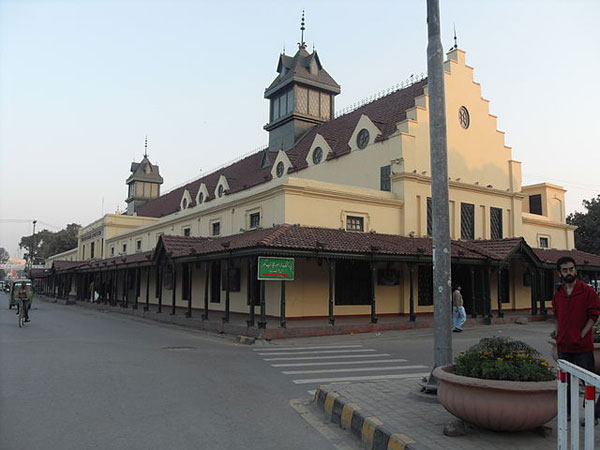 Lahore Sangat installed plaques at the residences, workplaces and places associated with notables and famous personalities of Lahore at Mall Road and Anarkali to pay tribute to our legends on Monday. The name, time-period, profession and contribution of every notable were written on a blue plaque to pay tribute to the iconic personalities.

Lahore Sangat is an informal association of Lahoris that works to remember and pay tribute to the extraordinary women and men not always sufficiently acknowledged, by mapping where they lived and worked by installing distinctive blue enamel plaques in their memory. The Lahore Sangat has already installed plaques in the memory of legends including Nobel laureate Prof Abdul Salam, A.S.Patras Bukhari, Saadat Hasan Manto, Sir Ganga Ram, Rustam Gama Pehalwan, Faiz Ahmed Faiz and Maulana Zafar Ali Khan at the places where these personalities used to live in Lahore.

Lahore Sangat has currently prepared a preliminary list of over 140 icons of which over 20 plaques have already been installed. As many as 11 plaques were installed within the walled city of Lahore earlier this year in March but the process came to a halt due to the COVID-19 lockdown. Lahore Sangat also acknowledges the support of the Commissioner Lahore, Municipal Corporation Lahore, Walled City Authority Lahore and Lahore Biennale Foundation. It also looks forward to putting up one hundred more plaques in the city within this year.

“We’ll install 120 plaques in next few months at the places where these exceptional individuals used to live in Lahore ranging from the Model Town to Walled City,” said Prof Fauzia Husain Qureshi, the face behind Lahore Sangat. Qureshi, an architect, who retired as Principal National College of Arts, told Daily Times that the objective of the plaques is not only to honour the personalities but also to generate awareness and instill a sense of pride amongst the people who live in the vicinity of the significance of their locality and neighbourhood. “The people living here will take pride and they will also keep the vicinity clean to pay homage to the legends,” said Qureshi, who has a vast experience in preserving the cultural heritage and she is also president of ICOMOS Pakistan. The purpose of installing the plaques is also to aware the young generation regarding these personalities as most of them don’t know about them unfortunately, she added. The plaques will be installed in honour of exceptional individuals who were painters, writers, poets, actors, scholars, singers, dancers, composers, saints, mystics, journalists and publishers.