* To supplement Independence Day celebrations, the Daily Times will highlight, all of August, the individuals who continue to make Pakistan proud. Our eighth interview is with the renowned VJ and host Anoushey Ashraf 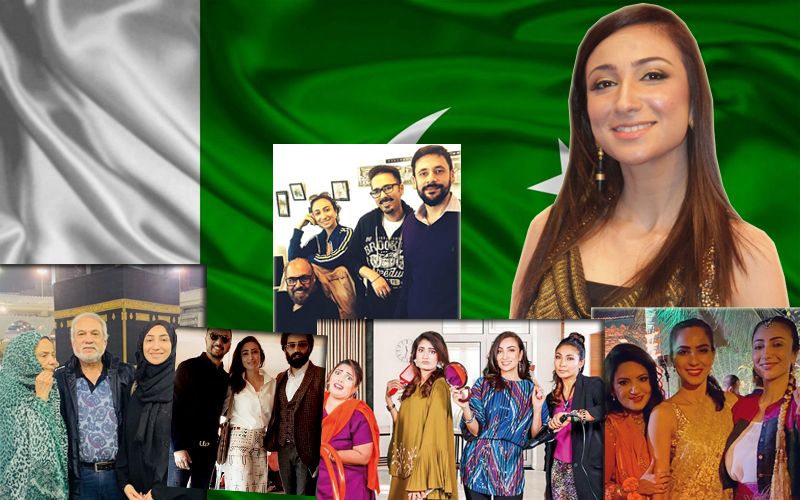 Tell us about your foray into the field of VJ-ing, hosting and then acting. How did it all begin for you?

I was doing my A Levels and I used to have a lot of time on my hands. I wanted to join television because I wanted to take up journalism later on. So I sort of landed up in Indus Vision as I had a friend working at this new television channel. I just kind of got in and found my way working for news department and write for them and did research for them while I was still studying. The CEO of the company saw me and suggested that instead of working for the news, I should audition for the music channel. So I gave it a try and I put a little bit of makeup on and gave the audition for my first show. It was half way decent and literally this is how it all began.

You have a humongous fan following in not just Pakistan but all over the world. How responsible do celebrities need to act in the way they dress, act and speak considering so many people follow them and look up to them as role models? Does it get tiring sometimes when you know how whatever you do might create such an impact?

It is actually a pretty good question. I don’t think celebrities are responsible in the way they speak. Whatever comes out of their mouths really reflects on who they are as a person. I don’t say you know there are some celebrities who dress in a certain way which I don’t think is necessary because I would always take people on their worth in terms of the work that they do, what they stand up for and what they speak up for rather than their personal lives or choices that they made or their career choices. It does get little tiring because you have to watch yourself but I think over the years, celebrities have been able to stay true to who they want to be on the things that they truly genuinely believe in and you can tell when they are genuine so that’s what I try to do I try to pick up my battles and stay true to the things that are particularly close to my heart and be honest with them instead of pleasing people by my act or speech. I think your honesty eventually shines through and people now understand the difference. Having said that, yes, there are certain things celebrities do need to take care of because they know that the youngsters are watching so not everything needs to be in public eye. Somethings should be should be kept for yourselves.

Alright, so currently I am working on a few projects. I was working on a really interesting travel show which unfortunately has been put on hold because of the pandemic but it’s going to happen really soon. I’m working on my own podcast that I really want to begin and doing loads of freelance work for many different brands. So yes, that’s what has kept me busy at the moment.

What have you enjoyed doing more in your career – VJ-ing, hosting or acting?

I think VJ-ing and hosting are very similar. One is for the public and other one is for the camera but definitely hosting is my area of expertise because through this, I am able to communicate to people across this country and am in the position to make a difference and I really enjoy that. I like interacting with them, I like speaking my mind, I like to engage with the Pakistani audience and share across the world. I think hosting provides this opportunity much more than acting does.

How much in your view has the pandemic affected music production in the country?

Ali Noor has just come up with his album. Some music has been produced. Some people have released singles as well so I think as far as musicians’ time to perhaps create you know indulge in their art and in their fun however in terms of business music has suffered greatly even before the pandemic and now perhaps even because of the few events not happening or taking place so we are hoping things get back to normal whatever the new normal is. So you know what the pre requisites are. We can move forward accordingly. Following the SOPS, we can still get in to create music and then have production because you know if it comes to a halt, its tragic on multiple fronts including unemployment, creativity and generally the industry.

Who have been some of your personal favourite VJs in Pakistan? And globally?

I think Dino is excessively talented for what he does. It comes to him very naturally and he is not trying to put on a face or look a particular way or speak a particular way and he really follows his gut which I think is a very strong trait of a genuine VJ. So I think he’s my favourite for sure and globally I really like VJ Cyrus, there was Trey and this lady by the name of Sophiya. There are so many there. There was a VJ Ruby in India and they are all really good.

Tell us about a memorable incident in your career?

Recently, I have been thinking about the negative and positive incidents in my career. I came across a video of Moin Akhtar and I remembered how I had the honour of meeting him and hosted a show in my career with him. It’s a very memorable moment because I remember going up on the stage and being very nervous because I was thinking that I’m hosting a show with this legend and I’m young and I’m stupid and I’m not experienced to be up on stage with him and the next thing I remember I told him and this was before going up on the stage. I told him that I’m scared and you are so amazing at what you do and I have zero experience and no comparison and he tried to make it easy for me and made me comfortable. He was like I couldn’t sleep all night when I heard that I was hosting with you because you are the voice of the young generation and people look up to you so I don’t want to sound too out of date. So I think we are going to complement each other. That’s what the biggest thing any artist can do for another person to make them comfortable. The way he told me he is nervous too and he is excited as much as I am and made it easy for me to get up on the stage and host with him.

I think my biggest achievement perhaps is consistency and the fact that I have been able to stay relevant and grow. It’s not one big award or one big thing that I may have done but just being consistent over so many years, over 15 years, working hard and still having love and respect in the hearts of the people consistently without being under any pressure or hate. Not being criticised I think it’s a great achievement and I’m lucky and I’m super thankful.

‘I think my biggest achievement perhaps is consistency and the fact that I have been able to stay relevant and grow. It’s not one big award or one big thing that I may have done but just being consistent over so many years, over 15 years, working hard and still having love and respect in the hearts of the people consistently without being under any pressure or hate. Not being criticised I think it’s a great achievement and I’m lucky and I’m super thankful’

Pakistan is everything. It’s my identity and my home. I wish words were enough for me to express what it means to me. It’s a feeling which is indescribable. I’m proud and very grateful to this country for giving me all this respect, name, fame and all those things. However, my vision for Pakistan obviously includes for it become a lot better than what it is currently. Where I like it to be in terms of tolerance, patience, poverty alleviation, education all those thing so my vision for Pakistan would just be progress of human mind and life. No bridges or buildings or roads yet but education, wisdom and exposure to the world. I would really want Pakistanis to have those things so they could be better citizens to their own country. I would love to see that one day.

Thank you this. It’s one of the best compliments. I never consider myself a national hero but thank you. As far as my national hero is considered, it’s Quaid-e-Azam Muhammad Ali Jinnah. There’s never been another person like him and we would never know enough about him so he is my true national hero and then let’s skip all politicians altogether and come down to sportsmen who’ve made us really proud from Jahangir Khan to Jansher Khan to cricketers to Aisamul Haq who plays tennis to anyone who plays sports; women men, mountain climbers to Naseem who’s the fastest runner, to the girl who is scuba diving and she’s on her little surfboard and surfing across the seas in the Makran Coast. Sharmeen Obaid, Malala, women doing great stuff in their field of work. They’re all my heroes. Everybody who’s trying to make this country a better place is my national hero.

Anoushey Ashraf is a Pakistani VJ, host, RJ and actress. As a VJ, she appeared on the music channel MTV Pakistan. She has also acted in a play for PTV directed by Saira Kazmi in a 13-episode serial – in which her role was that of a best friend of the lead, played by Marina Khan. She is now the face of many brands. She gained fame as one of the initial string of VJs.

Anoushey Ashraf has rubbed shoulders with many national and international stars throughout her career both in her home country and abroad and it is because of her immense talent and uncountable achievements that we’re very proud of her.