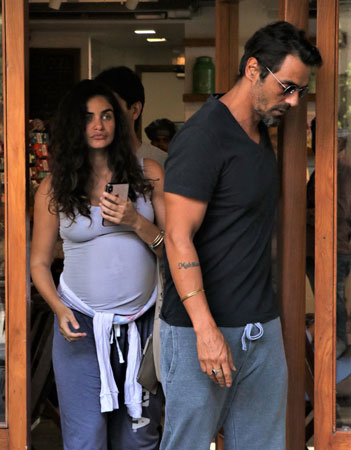 The hunk of an actor Arjun Rampal’s ladylove Gabriella Demetriades is a boss lady on social media.

The stunning Gabriella recently posted a picture of Arjun in his latest look, while the majority of people loved it, there were a few who tried trolling her over how old the actor is looking.

Arjun Rampal was earlier married to supermodel Mehr Jessia, however, the two announced their separation in May 2018. The couple mutually decided to part ways but continue to stay friends. Arjun and Mehr have two daughters Mahikaa and Myra.

In July last year, Arjun and Gabriella were blessed with a baby boy Arik.

Gabriella was seen in 2014 release Sonali Cable and was seen in a cameo appearance in the 2016 Telugu film, Oopiri. She has her own design label Deme By Gabriella and several B-Towners don her collection.

On the work front, Arjun Rampal was last seen in renowned director JP Dutta’s multi-starrer war drama ‘Paltan’ and is currently working on ‘Nastik’ by Shailesh Varma. Next, he will be seen in a supernatural thriller ‘Anjaan’ which is directed by Amitebdra Vats and written by Pooja Ballutia.