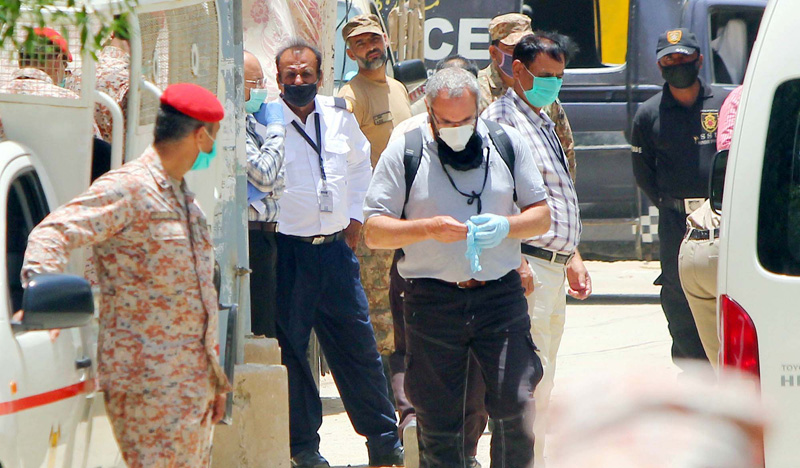 Initial reports said the Pakistan International Airlines (PIA) Airbus A-320 went down after an apparent engine failure. Aviation authorities said on Tuesday that they have shared their initial findings with the visiting 11-member team from the European planemaker. The Airbus experts and engineers also visited the crash site of flight PK-8303, where they were given a briefing by officials of the Aircraft Accident Investigation Board. “We are providing all possible assistance to the technical experts of Airbus,” said Abdul Hafeez, a spokesperson for PIA.

The probe team inspected the runway of the Jinnah International Airport. They also visited the air traffic control tower and radar control station. The technical experts studied the remains of the plane and inspected the engines, landing gear, wings and flight control system of the aircraft. They are expected to take the aircraft’s black box recorder which contains the flight data record and cockpit voice record and any other evidence that will help with the investigation. The team was scheduled to fly back to France on Tuesday after 16 hours of investigation.

The flight took off from Lahore and crashed on Friday while trying to land at Jinnah International Airport. Only two people on board survived the crash, including Zafar Masood, a bank executive. On the ground, 18 homes were damaged but no one was killed, mainly because the local residents were gathered at nearby mosques at the time, officials had said. Eight people on the ground were injured.

So far, authorities have handed over 41 bodies to their families, Hafeez said, adding that DNA tests are underway to identify the remains of other victims.

The investigation team has also summoned flying record of Captain Sajjad Gul, the pilot of ill-fated A320 Airbus. While investigating various aspects of the air crash, the Aircraft Accident and Investigation Team demanded overall flying record of Captain Sajjad Gul from the PIA. The probe team has inquired about the flying routes of the pilot and also asked about the details of the log book and whether the captain was observing fast during the flight. The inquiry team has also asked questions about a Lahore to Karachi flight two days ago, inquiring whether the same pilot had operated a flight on the route two days ago on May 20. The issue of purported flying fatigue of the pilot is also being inquired about, according to reports.

According to the national carrier’s spokesperson, bodies of the victims are being taken to their homes on the special instructions of the prime minister. Four bodies have been delivered to Lahore and three to Islamabad. “PIA is engaged in the 24-hour emergency response centre to assist the victims’ family members,” the spokesperson claimed. “PIA has immediately started delivering Rs1 million each to the victims’ families.”

Earlier, Captain Sajjad Gul’s father told a media briefing that his son had logged in 17,000 hours. He was the only pilot to have completed 1,000 hours in a year and a was thorough professional, said the aggrieved father. He said no remarks must be made until the black box’s contents come forward.