I had ended my article, Australia-China tussle, (Daily Times, May 2, 2020) by observing that it would be interesting to see how it plays out. Well, both sides maintained their strong views. The Sydney Morning Herald, for instance, ran a long commentary by Pater Hartcher, who is both its political and international editor, titled: China can’t bully us into submission.

This was in response to China’s decision to target export of barley and beef from Australia, first as a response to its alleged dumping and, the second, for some technical breaches of labeling etc. Though some such issues were ongoing, but Beijing’s trade action, more or less, coincided with Australia initiating the call for an inquiry into the origin of COVID-19.

China was opposed to it (though it has changed its position, as we shall see later) because, among other things, it seemed to assume that China was somehow responsible for its origin and related lack of transparency, which, at the time of writing, has cost more than 300,000 lives, and quite a few million people infected worldwide. Australia, on the other hand, pushed for an international investigation to learn lessons for the future and to be better prepared.

China let it be known that Australia might pay a hefty economic price in terms of trade reprisal against its exports of which barley and beef are already targeted, as a foretaste of what might follow

China let it be known that Australia might pay a hefty economic price in terms of trade reprisal against its exports of which barley and beef are already targeted, as a foretaste of what might follow. The Chinese ambassador here had indicated beef exports, as well as that Chinese tourists, and Chinese students enrolling in Australian universities, might not fancy the idea of coming to Australia in an unfriendly environment.

The Chinese ambassador didn’t specifically mention iron ore and coal, which are Australia’s major exports, possibly because these are not easily replaceable in terms of secure and stable supplies from other countries. But as the relationship becomes more strained, China might use everything in its armory. 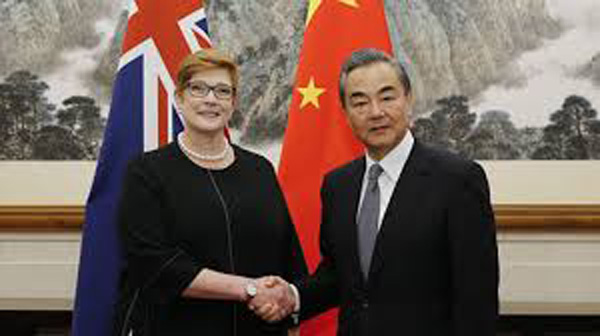 In an article in the Sydney Morning Herald, Charles Edel and James Carouso, sought to minimize the threat by pointing out that China had made similar threats to other countries in the past, which weren’t acted upon. According to them, “Australia is not alone in having its exports threatened. Japan, South Korea, Taiwan, the Philippines, Norway and others have all had their trade with China disrupted after making decisions that angered Beijing.” They go on, “Late last year, China’s ambassador to Denmark threatened a free trade agreement if a 5G contract with Huawei was not signed.”

Similarly: “In Germany, China’s ambassador stated if Germany decided ‘to exclude Huawei, this will have consequences. You sell a million cars per year in China. We may also declare them unsafe.'”

Edel and Carouse believe that these threats are not usually acted upon, even though they still think that greater diversification of export market by Australia might be the way to go. But diversification of markets is a long term solution, if it were possible. In the meantime, if China were serious about economic reprisals, Australia is not in a comfortable situation.

Australia has believed that they will somehow be able to balance their primary strategic alliance with the US, alongside China as their biggest trading partner. Apparently, this is not working. As columnist Shaun Carney wrote, “… whatever mist of delusion still existed has been… blown away by the COVID-19 pandemic.”

He added, “One great power is heading off on a strange, self-obsessed trajectory and the other has no interest in benign co-existence.” As for Australia, Carney opines: “We will have to become more self-reliant in every sense. This will be expensive but there is no other choice.” This is a hope, not a policy prescription.

Australia’s trade minister has counseled businesses to diversify their export markets, as his calls to discuss the matter with his Chinese counterpart have not been returned. In other words, China is seriously angry with Australia.

In the meantime, on the question of inquiry into COVID-19, Australia was able to get EU on its side, as well as a number of other member countries of the World Health Assembly, which overseas the WHO, to move a motion demanding “a stepwise process of impartial, independent and comprehensive evaluation” of the international response to the pandemic and WHO’s response to it. And that has reportedly to have been approved by the required two-thirds majority. It doesn’t mention China, though.

Sensing that international opinion is clearly in favour of an inquiry, China has apparently accepted it in principle but only after the pandemic is over and it is conducted by the WHO, which Trump considers “China-centric”. In a sense, the WHO’s role itself is in question and would need to be investigated. In other words, there is unlikely to be an inquiry any time soon, if at all. In any case, China would like it to be on its terms.

Australia, though, has felt proud and vindicated that they were able to successfully push the motion for an inquiry into COVID so far, which further angered China. China’s embassy here described Australia’s self-congratulation “as nothing but a joke.”

Whatever happens with the inquiry, the relations between China and Australia are likely to remain strained for the foreseeable future. Balancing two contradictory relationships between Australia’s primary strategic partner (the USA) and its biggest trade partner (China) was never going to be easy. And with the quirky and unreliable Trump as the US President, Australia has more to worry if its security alliance with the US is reliable enough against a powerful China.