An Alert of World Economics Encounter through Visual Arts 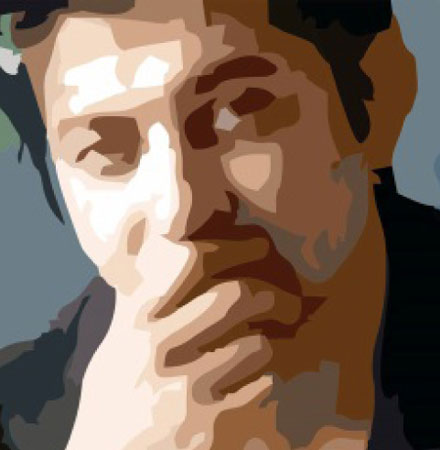 A detailed report on “Visual Art Exhibition” by Syed Shahkar Shah. Shah has travelled through times and has absorbed shocks of all thick and thins of various dimensions of life in relation to emotional, behavioral, social and economics experiences. After a long painful journey, he has attained a cool and calm personality possessing a tsunami of feelings and ideas within to express. He has been in try to channelize the eruption energy of ideas of his hidden potentials while oozing it out for the benefits of next generations, but halted himself just because in search of suitable time to work out.

Syed- A Noble Person, Shahkar- an Ultimate Creation, Shah- the Greatest One, by virtue, has become a true depiction of his name and he took 40 years to ripe up The Greatest & Ultimate Visual Arts Creations of his own Time and Space with a comprehensive message for the entire humanity. In his art works, he has fulfilled the ultimate requirements, essential to create “Master Pieces”. Syed’s Noble Massage is to save and treat humanity on equality at universal level. In last 40 years’ span, Shah has made himself a “Shahkar” by acquiring Skills of Paintings, Sculptures, Product Designing and Knowledge of Physics and Meta Physics, History, Mind Sciences and Comparative Studies of Religions.

According to Shah, he has deciphered the purpose of his life and his aim is to save and spread his message to the generations yet to come. The fear behind his mind is mere loss of this knowledge, experience and identity would not have die with his own death, which he has attained after such a long journey and found the answers to his proclaimed questions. To safeguard his identity being a creator of his intellectual properties, he has placed blood marks on the back of his artifacts which will remain ever a proof of originality. 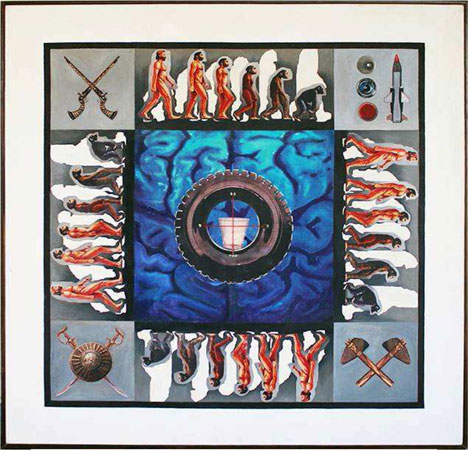 He has been into experimental phases after phases, sometimes experiments for techniques and skill and sometimes expressions of emotions and thoughts in light of design elements. The selected paintings and sculptures for his exhibition are vital manifestation of his sole makeup. In the exhibits, he has paid a due respect to old masters and ancestors of art by hooking up roots of his techniques and subject matter which he learned through epochs. At the same time, he did not ignore the latest skills for slide like paintings having alike frames with a little jerk of visual variation in next painting of same sequence. The use of printed images on canvases and painted to mold them for meaningful expressions is a tribute to technology of the present times. His melodious compositions of colors, codes, vibrations of strokes to form shapes and volumes are true reflection of an intellectual’s perfections.

For the Struggle of Survival, Shah delivered immaculate deliverance in Architecture, Product Design, Landscape, Monuments, Interior and Doors without compromising on its Identity, Originality and Articulation. His diversified products show a great coherence of visual impact with each other on the same wall of projection. His exhibition is real amalgamation of all the ideas and techniques which he has learned by the passage of times.

Shahkar desires that the viewer should not see his paintings or sculptures without knowing the artists point of view about the content of any particular painting or art piece. According to him, he has put his own profound and unique message in his every artifact which should not be ignored by the spectators. That is why he has a written description about a single exhibit separately. All individual exhibit’s ideas have coherence of attachment with a single string of subject matter and that one subject is more likely for the entire universe to teach the lesson of solidarity and humanity on equality level by disapproving the concept of “Might is Right”. His message is equally addressing to the historically deep-rooted causes of social and religious disturbances, at the one end and as of the current global uncertain issues, on the other end. He, after counter questioning to various religious ideologies and social norms, has established that “Natural Ideology” is the only ideology who has paved a way to global peace since times.

He wants to portray, at a broader spectrum, although time does not have any beginning or end, but the happing in the time does have its start and end, both. Furthermore, according to religious manuscripts and ideologies the commencement of our universe has got some specific time for its start. This start has also been proven by the modern scientific and cosmological studies. The end time of the universe and its happenings has not been defined yet, although, its ideas have been predicted back in the history through writings and sayings of intellectuals of the times. Mr. Shahakr has studied various of such predictions and found that it is the man, by himself, who will be responsible to diminish this world even before the predicted time for its end, just because of injustice and unbalanced interactions among the human beings and its environment.

The way, Shahkar has empowered his message through his art works is as powerful as it is meant for ancient world at the same time and is as modern as it is only for this age of information, computer and laser. His inspirations from the old masters of art, modern artists and post-modern arts transforming into his own identity, is a reflection of mastery to depict art rulings. Picasso, Dali and Gauguin’s images in his painting “Half Execution” put his own tribute signatures to his mentors. “Reply to Barnett Neman” has a multiple disguised expressions for the artist himself, mentor and the viewer. He has successfully passed the message of external forces responsible to the shape the life in odd ways in painting with title “Life is a Molding Factory”. The “SQUARE” composition of the content revolving its “CENTER” in painting with title “Back to Square One” is a novel expression through evolutionary gestures of the typical attitudes of the ruling figures and the means of power they have had. 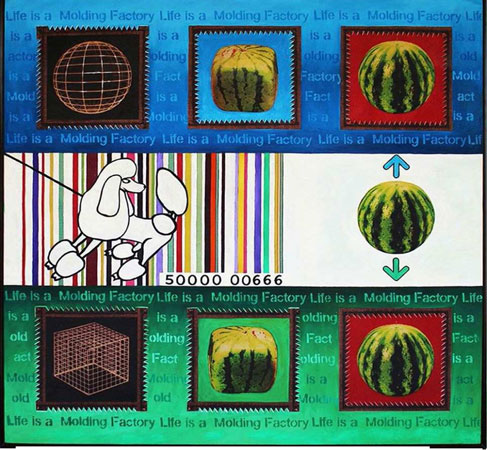 According to Mr. Shahkar, “my messages are vital enough to be served for long times. That is why I have selected media (for the exhibition held in February 2020) of Paintings and Sculptures to convey my messages to generations of coming centuries”. I have a critical eye on expression of power of World Leading Economies through “New World Order” (NOW), “Agenda 21”(A-21) and Bill Gates mindset, he father explained. These types of messages should be displayed and saved to remind the poor economies of the world. The message of such an immense importance should not be presented through papers, newspapers and digital media because it is considered that these media have be very less age of existence than the age of paintings and sculptures, by giving examples of the old master of Rome and Italy of 14th and 15th centuries, he explained.

Ongoing Corona Virus Pandemic, which emerged out just after his exhibition, does has conspiracy theory related to NWO, A-21 and hidden potential to grasp the total world’s economy. His apprehensions, painted in the paintings and molded in the sculptures are being proving those true in current times. His artifacts do have the policies to overcome on such critical situations for the sake of equilibrium on the livening creatures covering the entire globe.

Plugging the flowing time of Shahakr’s creations in this extravaganza will led him to expose his long grooming thoughts and collection of latest art pieces to be recognized in contemporary art community at national and international level. His work is paramount in its nature of techniques, contents and messages which will not only inspire the artists of his age but also the coming generations of artists. Every piece of his exhibition is a “Marvel of Art” which should be collected and kept in records for future references. The vibes of collected artifacts will always remain in the atmosphere to remind the brains of every coming moment about the real message to make cool, calm, clear, balance and peaceful environment of the universe. In this way artist’s soul will feel satisfaction for the contribution to his legacies behind.

Mirza Amjad Ali is a close friend and class fellow of Artist Syed Shahkar Shah and also an artist and practicing architect in Lahore – Pakistan who has regular Art Criticism writer of various Gorup ans Solo Art Exhibitions by writing valuable words. He has a vast study of behavior sciences, history, political & socioeconomic issues, science, art, religion and culture and he is conducting research on the issues of similar nature