One wrong decision leads to another and the process continues. The blowback to Burhan Wani’s killing led to a hitherto unseen Kashmiri movement for independence. Wani’s killing empowered separatists while mainstream leaders such as Mehbooba Mufti and Omar Abdullah found themselves getting increasingly alienated from the masses. In order to remain politically relevant, they started speaking out against the BJP government, so much so that Mufti termed her political alliance with the BJP akin to “drinking a cup of poison.” To salvage the situation Narendra Modi imposed governor rule as a stopgap measure. 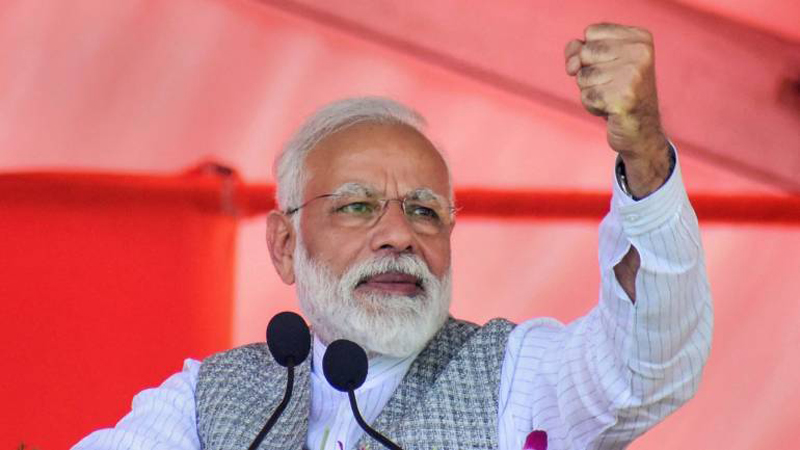 Unsurprisingly, the use of brutal force under the garb of governor rule failed to arrest the idea of freedom. The more the BJP government tried to bring Kashmir under control, the more it seemed to slip out of its hands. To Modi’s embarrassment Donald Trump stepped in with his offer of mediation. As a desperate measure to prevent the issue from getting international attention, the BJP stripped Kashmir of its special status. That, however, internationalised the issue even more as it put Kashmir on the UNSC agenda after fifty years. Modi, therefore, gave Pakistan in just five years of his misrule what Pakistan couldn’t achieve since decades: internationalisation of the Kashmir dispute.

As John Milton aptly said in Paradise Lost, “Who overcomes by force, hath overcome but half his foe,” Modi is living in a fool’s paradise if he plans to dispossess Kashmiris of their right to freedom by the use of brute force. How can a people not content with their special status and demanding freedom can reconcile with the fact of being deprived of even that special status? The way Kashmiri youth comes in hordes to pelt stones at Indian soldiers and brave atrocities leaves no doubt that Kashmiris have chosen liberty over life.

Modi’s latest solution to the Kashmir dispute is to call Kashmiris Indians when they call themselves Kashmiris and consider Kashmir as an integral part of India when neither Kashmiris nor any other nation accept the claim. This is brinkmanship at its worst. It is as ridiculous as Khadim Hussain Rizvi’s solution to Pakistan’s debt issue: “Fold your sleeves and ask your debters to get lost as we are not going to pay you interest on your loan. We intend to pay you the original amount only when we have it and be ready to fight us if you don’t come to our terms. Here, I have solved the issue forever.”

The only difference between Modi’s and Rizvi’s theatre of the absurd is that the latter’s silliness made the world laugh while the former’s reign of terror caused millions to sob. The guy already has blood on his hands for being responsible for the Gujarat massacre; his latest action has put millions at the risk of extermination. His highly questionable handling of the Kashmir dispute is a travesty of international humanitarian laws and a mockery of the much trumpeted but imminently endangered Indian democracy. The world at large but Indians in particular need to understand that Modi’s assumption of power is the worst thing that has happened to modern India.

Three parties-Kashmiris, Pakistanis, and Indians-would be affected by Modi’s arbitrary actions in Kashmir. By the looks of things, it seems that Modi has got the better of Kashmiris and Pakistan by removing Article 370 and 35A from the Indian constitution. It is, however, otherwise. Both Kashmiris and Pakistanis would have something to lose and gain from the recent developments in Kashmir while India would end up as the biggest loser. Kashmiris, for instance, are at the risk of genocide, but the same would forge a much-needed unity among them. This would infuse a new life into the separatist movement. Pakistan may experience more radicalisation as distressing news from Kashmir always make Pakistanis sympathetic to jihadi groups, yet at the same time it would get an opportunity to draw global attention towards Kashmir.

Oblivious to the consequences of Modi’s ill-considered approach to settle the Kashmir issue, India’s far-right is all-praise for the man. They, however, would be well advised if they spare a few minutes to reflect on Modi’s decision and its repercussions for the Indian state and society, let alone the region. The decision has achieved nothing other than to sound a death knell to Indian pluralism, unite the divided Kashmiris against India, transform a medium level insurgency into a high level one, and establish India’s status as an aggressor state among the community of nations.

Having caused all this damage, the BJP would hardly achieve any of the objectives it aims at. India’s long-held view that the Kashmir issue would be resolved bilaterally as agreed in the Simla Agreement had been in conflict with Article 103 of the UN Charter. The said article stipulates: “In the event of a conflict between the obligations of the Members of the United Nations and their obligations under any other international agreement, their obligations under the present Charter shall prevail.” Since 1994 India do not even adhere to the Simla Agreement as its parliament passed a resolution declaring Kashmir as its integral part, but neither the UN nor Pakistan accepted that view. Revocation of Kashmir’s special status is India’s fresh attempt to convolute Kashmir’s status as a disputed territory. It, however, doesn’t have any legal value as according to Article 25 of the UN Charter India is still bound to carry out the decisions of the Security Council that rejected India’s unilateral actions in its recent meeting.

What is more, India’s project of settler colonialism in Kashmir is also bound to fail. As Indian security forces go on the offensive, Kashmiri resistance movement would gain momentum. The exodus of Kashmiri pundits from 1989 onwards and Indian government’s inability to guarantee them protection serve as a stark reminder that people flee from violent to peaceful areas and not vice versa. Narendra Modi would do well if he takes a leaf out of Martin Luther King’s book as he famously said: “Hate multiplies hate, violence multiplies violence, and toughness multiplies toughness in a descending spiral of destruction.” It would help him disabuse himself of the idea that violence may make Kashmiris abandon the idea of freedom.

As things stand, it seems that logic is not going to prevail on Modi and his far-right supporters. Having failed to achieve any of his objectives, he has already done irreversible damage to Indian democracy and the tradition of pluralism. If the sane voices within India, which are few in number, do not prevail on him, he would lead Indians to hell. Hence, sooner the Indians rise up against his disruptive behaviour the better.