* President says US has never been closer with Pakistan than it is right now
* Imran says that for him, Afghanistan is the top priority 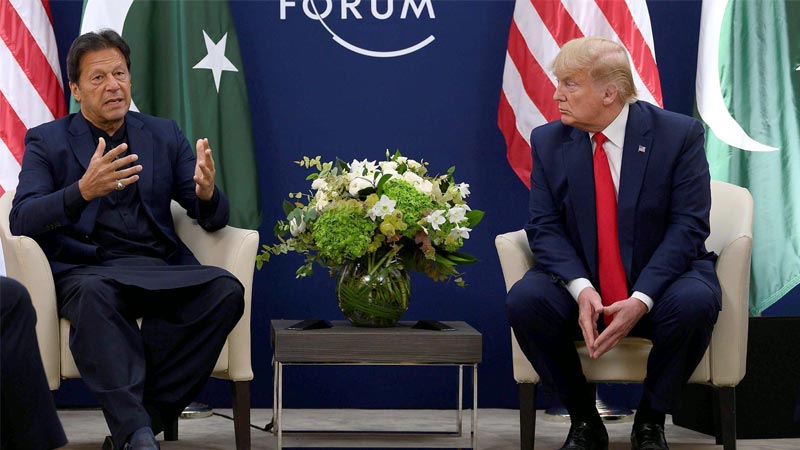 US President Donald Trump said the United States was watching developments between India and Pakistan over Kashmir “very closely” and was prepared to help if necessary.

Speaking ahead of talks with Prime Minister Imran Khan on the sidelines of the World Economic Forum, Trump said trade and borders were both critical points for discussion, while Imran said that for him Afghanistan was the top priority.

This is the third meeting of the two leaders in less than a year amid reports that the US and Afghan Taliban are close to striking a peace deal after over yearlong painstaking process.

“Trade is going to be of very, very paramount importance … and we’re working together on some borders, and we’re talking about Kashmir in relation to what is going on with Pakistan and India. And if we can help we certainly will be helping,” said the US president.

“We’ve been watching that and following it very, very closely,” he added.

On August 5 last year, India had stripped Occupied Kashmir of the special autonomy it had for seven decades through a rushed presidential order.

Kashmiris see the move as an attempt to dilute the demographics of Muslim-majority Kashmir with Hindu settlers.

Pakistan had strongly condemned the move and vowed to “exercise all possible options to counter the illegal steps” taken by New Delhi.

Imran said that while relations with India were important, the most pressing concern was Afghanistan.

“The main issue, of course, is Afghanistan because it concerns the US and Pakistan,” he said. “Fortunately we are on the same page. Both of us are interested in peace there and an orderly transition in Afghanistan with talks with the Taliban and the government.”

He said it was always hoped the US would take part in resolving the issue, “because no other country can”. Imran is one of at least three leaders Trump is scheduled to meet at Davos. The others include European Commission President Ursula von der Leyen and Iraqi President Barham Salih.

The US president avoided responding concretely to a question by a reporter whether he would “also visit Pakistan” when he makes a trip to India, instead saying, “Well, we are meeting right now. I wanted to say hello.”

Trump said that from a relationship standpoint, the US and Pakistan “are getting along very well.” “We have never been closer with Pakistan than we are right now.”

The meeting comes against the backdrop of Foreign Minister Shah Mahmood Qureshi’s trip to the United States, where he met with his counterpart to defuse regional tensions.

The prime minister will deliver a keynote address at the WEF special session and also interact with corporate leaders at the Pakistan Strategy Dialogue.

On the sidelines, Prime Minister Imran will hold bilateral meetings with several world leaders, but the most significant of which is his meeting with US President Donald Trump.

The premier will also hold meetings with a number of corporate, technology, finance and business representatives of international financial institutions. In addition, he will address senior international media persons and editors during a session with the WEF’s International Media Council, official sources said.

This year marks the 50th anniversary of the forum where political leaders, business executives, heads of international organisations and civil society representatives will “deliberate on contemporary economic, geopolitical, social and environmental issues.