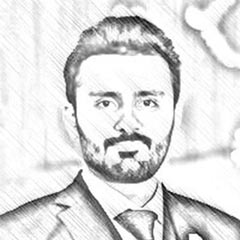 Kartarpur corridor is a new entry point for the Sikh community who conveniently visit their religious Gurdwara of Darbar sahib. In 1998, the corridor project was discussed in the reign of Prime Minister Nawaz Sharif. But it was announced in 1999 by ministers of Pakistan and India (Nawaz Sharif and Atal Bihari). It is located between the Narowal district (Pakistan) and the Gurdaspur district (India).

In the long term demand of the Sikh community, in 2018 construction is starting for the corridor and for this project Pakistan takes no funds from foreign countries. The first stone was laid down by India’s side then Pakistan takes the step and laid down the stone. A report stated that the total expenditure of corridor is 17 Million US dollar; it would cost India 2.2 Million US dollar and Pakistan it would 14.8 Million dollars. Spending a high amount on this corridor shows the willingness and humbleness for the minorities. The purpose of this project is to support the Sikh community and its goodwill of the government of Pakistan towards the Sikh community. Pakistan’s genuine efforts have paid off! The under constructed kartarpur corridor will be completed on 9 November on the birth anniversary of Guru Nanak. Pakistan made this Darbar Sahib the largest Gurdwara in the world by transforming from Greenfield to building. The design of Gurdwara’ courtyard is even larger than Badshahi mosque. Imran khan state that:

“The next year you come here, you will find every kind of facilities,” Pakistan’s army plays a vital role in fulfilling this dream. That corridor also is known as “A road of peace” between two countries. The corridor is intended to allow religious devotees from India to visit the gurdwara in kartarpur. This allowing action of Pakistan shows the symbolism, freedom of religion, and shows that all sects are equal. Moreover, this action of Pakistan proves that there is freedom for all sects and minorities to perform their prayer in their holiest place. Prime Minister Imran khan protects the minorities’ worship places in Pakistan. Pakistan promotes the celebration of the holiest day for all the religion. In the future, Pakistan also takes the step for those Hindus who want to visit the katas raj temple that is located near to chakwal. While addressing the kartarpur corridor, Imran khan quoted the statement:

The Impact of the opening corridor is to Promoting the friendship between two countries that both are depending on each other. Pakistan wants to establish a good relationship from the neighborhood country for growing economics and increase tourism. And also want to keep peace on both sides

“My political party, the rest of the political parties, our army, and all our institutions are all on one page. We want to forward” Imran khan supports Navjot Sidhu for his Pakistan visit and said that he should not be criticized. More he says Sidhu promotes the friendship between two nuclear-armed countries. The Impact of the opening corridor is to Promoting the friendship between two countries that both are depending on each other. Pakistan wants to establish a good relationship from the neighborhood country for growing economics and increase tourism. And also want to keep peace on both sides. Pakistan is a peaceful country so for creating the harmony of peace prime minister of Pakistan Imran khan takes this step. Opening the corridor is a message of peace to India. One of the main benefits is opening this corridor to providing a way to conveniently perform the pilgrimage for the religious purpose. As Khawaja Moin Uddin Chisti shrine is located in India so people of Pakistan approach easily. Sikh community “Gurcharan Singh” welcomes the opportunity to unite Indians and Pakistan. He is happy Pakistan allows him to visit his holiest shrine. Pakistan gives access to the Indian Sikh community to visit their shrine in Pakistan for religious purposes without any visa. For visa policy Imran khan tweeted that:

“For Sikhs coming for the pilgrimage to Kartarpur from India, I have waived off two requirement:1) they won’t need a passport-just a valid ID; 2) they no longer have to register 10 days in advance. Also, no fee to be charged on the day of inauguration and on Guruji’s 550th birthday,”

On the request of Navjot Singh Sidhu, the kartarpur corridor will open for the Sikh community on the 550th Birth anniversary of Guru Nanak. Both countries assigned the agreement for not applying any visa to Indian Sikh pilgrims for visiting their religious shrine Gurdwara Durbar sahib. Moreover, it is decided that 5000 pilgrims can visit the Darbar Sahib where Guru Nanak spend 18 years of his life. The corridor will be open. Now the Kartarpur corridor is in the last stage of construction and on the 9 November, Imran Khan will inaugurate the corridor and warmly welcome to the pilgrims of the Sikh community on the occasion of 550th birth anniversary of Guru Nanak. In the concluded lines I would say it’s a positive message towards the worldwide. We are hoping that India will perceive the message of peace and collaborate with Pakistan in the same manner.