* Adding to Season 12’s canvas of hues and elements is ‘Dam Mastam’, a song that celebrates Shahbaz Qalandar’s love for Maula Ali 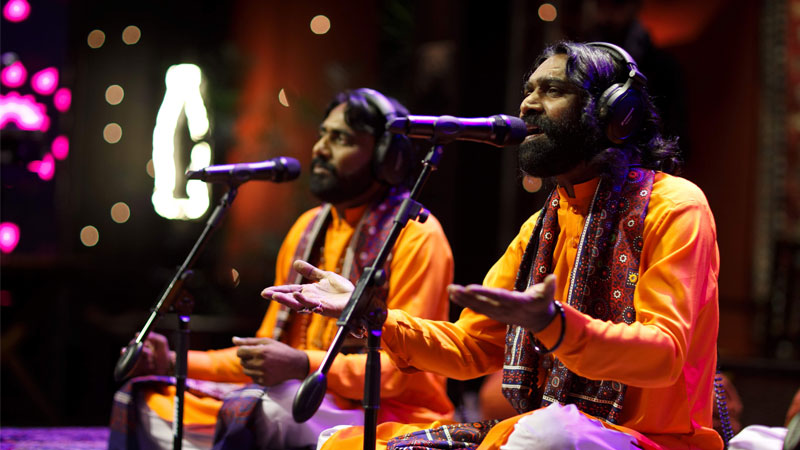 Adding to Season 12’s canvas of hues and elements is “Dam Mastam”, a song that celebrates Shahbaz Qalandar’s love for Maula Ali. An expression of love and devotion, the song uses the metaphor of being mast, a state of forgetting one’s self in the love of the Divine and His representatives on this Earth. The piece is composed in raag Bhimpalasi, a passionate and tender raag that accentuates the expression of adoration in its poetry. For Javed Ali Khan, who penned the lyrics for the piece in Punjabi and Persian, this is an outpouring of divine inspiration that can only be achieved through complete, unwavering faith. The song expresses a loving dedication to Maula Ali, proclaiming him to be the Lion of God and the King of the Brave. Dam Mastam brings qawwali to the present day, something Khan Sahab considers the core of his message – the art form must continue to live on, to bring peace, love and ultimately Divine Truth to the world today.

“As long as a spiritual artist respects their craft, peace prevails. It is wonderful when a singer has a noble cause, when they are spreading a message of love, peace and brotherhood as presented by our saints, without greed of money or the world. This is the real purpose of qawwali,” said Rahat Fateh Ali Khan.

Zoe Viccaji returns to her Coke Studio family this season in Ram Pam, a light-hearted take on love written by Sahir Ali Bagga, in Urdu and Punjabi, that tells the story of a love-struck girl confiding to a wise Baba about the state of her enraptured heart. Joining Zoe on stage is Coke Studio’s very own backing vocalist Shahab Hussain, who lends his voice to the eccentric Baba Bhatti in his first ever performance as a featured artist on the main stage. As our protagonist confesses her feelings to Baba Jee, he in turn promises to support her in this budding romance and so follows the playful conversation between the characters. For both Shahab and Zoe, this performance displays their ability to cross genres, singing melodies that weave between eastern and pop music accents, all the while maintaining a chemistry that shows the unique, quirky relationship between their characters. Ram Pam invites audiences to experience a fun, easygoing soundscape, which reminds one that perhaps love can be fun and, much like the protagonist of the song needs a friendly ear, at the end of the day, we all need our friends in times of angst, excitement and silliness.

“I think people are trying to come back to Eastern music. There’s this thirst to know our roots again, what we originated [from] in this part of the world. That’s what I’m trying to do with new music. I will write something in a Western way because that is what I was brought up with, but my instrumentation [is inspired by] theory of raags and notes. I’ve grown up with Western styles; the idea is to see how I can make that fuse with Eastern. At the end of the day what is music? It is something which is emotionally transporting you. How do you do it? I don’t know if there are any rules, but my mission is to try and find a new way of doing it.” said Zoe Viccaji.

“Music gives you goosebumps. Music is something extraordinary, it plays next level games with our mind. We are attracted to it and we are also driven away by it. It has power.” said Shahab Hussain.

A piece of Sufi transcendence, Maahi Diyaan Jhokaan explores the love one feels for its Source. The Seraiki poetry sings of the home one’s Beloved creates in the depths of one’s heart, something that propels the pursuit to meet one’s Love. The speaker constantly yearns for their Beloved and, in doing so, is prepared to bear the scorn of the world around them. For this Union is no ordinary one, this is a journey to the Divine, a journey that requires one to look inwards and sacrifice all the temptations of this world. This message is wrapped in the metaphor of Heer’s unyielding love for Ranjha, a love that was sowed at first sight of her beloved. Told by the Punjabi poet Waris Shah, the saga of Heer and Ranjha describes the tragic separation of the two lovers, their failed attempt to find union in this life, a quest that ultimately leads to their demise. A song of relentless pursuit, Maahi Diyaan Jhokaan is brought to life by the resonant vocals of Barkat Jamal, Hussain Bux Fakir, and Sonu Fakir, creating a chorus of earthy vibrancy.

‘As long as a spiritual artist respects their craft, peace prevails. It is wonderful when a singer has a noble cause, when they are spreading a message of love, peace and brotherhood as presented by our saints, without greed of money or the world. This is the real purpose of qawwali,’ said Rahat Fateh Ali Khan

“Music is nutrition for the soul. Before we even sing the song, we listen to it. We understand it, then we sing it. Since my childhood, this has been my soul’s nutrition. When I sing, my soul finds peace.” said Barkat Jamal.

This Season Coke Studio welcomes back the tradition of qawwali with the Iconic Rahat Fateh Ali Khan. A protégé of none other than Ustad Nusrat Fateh Ali Khan, Khan Sahab represents a 600-year-old legacy of musical heritage. Born into this tradition, Khan Sahab knew from a very young age that his connection to music was a spiritual one and would lead to a lifelong pursuit. Chosen by Ustad Nusrat as his heir, Khan Sahab took the helm of his family’s qawwali legacy and has since then gone on to sing thousands of songs at home and abroad. He has received an honorary degree (Doctor of Music) from Oxford University, was awarded the Sitaara-e-Imtiaz in 2015 while his song – Zaroori Tha – was the first non-film music video to reach 200 million views on YouTube in 2007. Khan Sahab’s musical repertoire has expanded across a diverse range, including contemporary styles of music from Bollywood to Sufi qawwali but, always, he aims to share the gift that music has given him with the world. Through Qawwali, he aims to spread the message of brotherhood, peace and love. Khan Sahab’s aim is always to present his family’s musical traditions and keep the genre of qawwali alive with care, honesty and accuracy. It is through the authenticity of this practice that his music continues to touch fans all over the world.

Coke Studio house band alumna Zoe Viccaji returns this season as a featured artist, coming back to what she says feels like ‘home’. Music being an integral part of her life and personality, Zoe has been performing since she was a child, starting in her early years with concerts for imaginary audiences with her siblings, progressing to church choirs, her first band, the ‘Ganda Bandas’ at the age of 17, and, later, in Nida Butt’s productions of Mamma Mia and Chicago. Zoe featured on Coke Studio as a backing vocalist for three seasons and won an audience for herself with a widely successful cover of Strings’ Mera Bichraa Yaar. Since then, Zoe has released a solo album, Dareeche, which won a Lux Style Award, and has released several singles in Urdu, English, and even Chitrali, showcasing her versatility as an artist. Having studied under the tutelage of Ustad Naseeruddin Saami and his son, Rauf Saami, Zoe has explored the world of Eastern Classical music, giving her the ability to cross genres. Always looking to evolve and grow in her art, Zoe continues to learn and train, incorporating what she discovers into her craft.

This season, Zoe returns to her Coke Studio family for her fourth performance as a featured artist, in a song that pays homage to a time when pop tunes reigned supreme on Pakistan’s airwaves.

Shahab Hussain is a self-taught vocalist, multi-instrumentalist and songwriter, whose love for singing began in Karachi’s summer monsoons, when he and his brother would belt out Bollywood songs as they danced in the rain. As a teenager, Shahab learnt to play the flute in his school’s marching band, tried his hands at the drums, and eventually picked up the guitar, teaching himself through observation and guidance from friends. Sometimes, months would pass, and Shahab would practice the same few chords, teaching himself numerous songs on those chords. Shahab now recalls those days with fondness, looking back at them as formative in his musical learning.

In 2006, Shahab formed an indie band known as Bells, which performed numerous gigs around Karachi, and has also worked and performed with Jimmy Khan, Mauj and Chand Tara Orchestra. Always inclined towards poetry, Shahab wrote the single Paryam that went onto feature in the 2017 film Chalay Thay Saath. A backing vocalist for Coke Studio since Season 9, Shahab has displayed his prowess in crossing genres and singing harmonies that fuse the East with the West, continuing to evolve and grow as he takes on the challenges brought on with each new song.

Hailing from the village of Jhol in Sanghar district of Sindh, Barkat Jamal is the founding member of his troupe. Son of Jamaluddin Fakir, Barkat Jamal began his musical learning while still in primary school, sometimes doing riyaaz for up to 5 hours in the morning before going to school. Entrusted with the tradition and discipline of fakiri, Barkat Jamal, alongside troupe members Hussain Bux Fakir and Sonu Fakir, travels through Sindh, carrying on the work of the fakirs in what he deems is his duty to spread the message of Sufi saints. For the troupe, fakiri is a matter of deep inward introspection in an attempt to recognize one’s Self. This introspection is a means to an end, the hope being to recognise one’s vices and embark on the pursuit of eliminating them. Ultimately this path to fakiri is one that evokes empathy, as it calls for respect of the Divine’s creation, and in doing so, fosters love for other human beings. Today the troupe can usually be found performing at their home base in the shrine of Hazrat Manthar Fakir Rajar. This season, the Barkat Jamal Fakir Troupe brings its message to Coke Studio’s stage in three voices that create a chorus of earthy vibrancy.