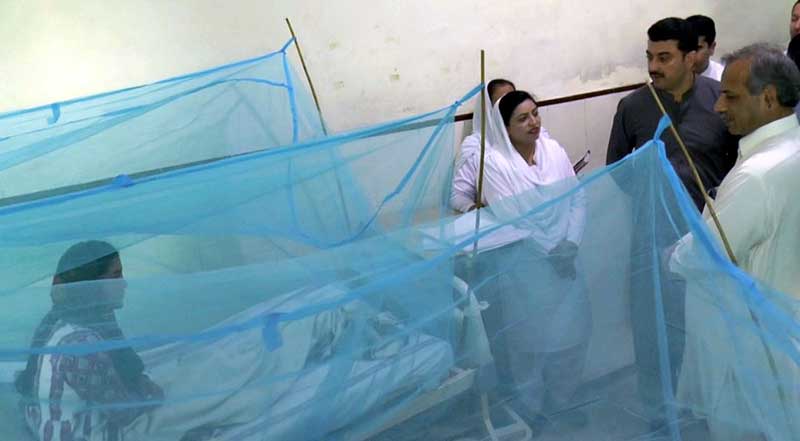 As many as 596 more people were diagnosed with dengue fever in Islamabad over the last 24 years.

Sources said a total of 526 people were diagnosed with the mosquito-borne disease at government-run hospitals and 70 at private medical facilities. Of them, 307 were tested positive for the deadly disease at the Polyclinic, 162 at the Pakistan Institute of Medical Sciences (PIMS), 53 at the Federal General Hospital and four at the CDA Hospital.

Meanwhile, one dengue patient died at the Polyclinic over the last 24 hours.

According to the sources, a total of 182 people suffering from the disease are under treatment at different Islamabad hospital.

Talking to media, he said our focus is on areas where most dengue cases are reported in Rawalpindi, Islamabad and adjoining areas. He said monitoring is being done in areas of Potohar region on a daily basis, Radio Pakistan reported.

Dr Zafar Mirza said preventive measures including sprays are being done in areas where there are reports of dengue prevalence. He said teams have further been reinforced with new staff.

Dengue virus continued to affect more people as the number of patients suffering from the diseased reached 3,604 in Khyber Pakhtunkhwa (KP) on Sunday.

The dengue attack continues to trouble residents of KP as 52 patients were brought to different hospitals over the past 24-hours. Out of the 52 dengue cases reported across the province, 27 are from Peshawar, eight from Naushera, seven from Swabi, five from Lower Dir, three from DI Khan while two each case were surfaced from Bonier and Charsadda.

According to the Health Department, at least 496 patients are currently under treatment in different hospitals across the province.

The number of dengue cases is on the rise in Karachi as 103 more people hit by the mosquito-borne disease were admitted to various hospitals in Karachi, according to the Dengue Surveillance Cell.

The number of people suffering from dengue fever has reached 1,618 this month whereas the tally of such cases across the province has touched 3,120.

A total of 15 new cases of dengue were reported in other districts of the province today. It is noteworthy that thus far, eleven people have died from the pandemic across Sindh this year.

According to sources, the federal government has decided to conduct investigation into the outspread of dengue fever.

The government would engage global institutions for holding an investigation into the spread of the deadly disease across the country.

In this connection, the health authorities will seek assistance from the World Health Organization (WHO), Centers for Disease Control and Prevention (CDC) of the United States (US) and Sri Lanka.

Sources within the Ministry of National Health Services said international experts will visit the affected areas in all provinces and Azad Jammu and Kashmir (AJK) to carry out a research on dengue larvae and its virus to ascertain the cause of the mosquito-borne disease.