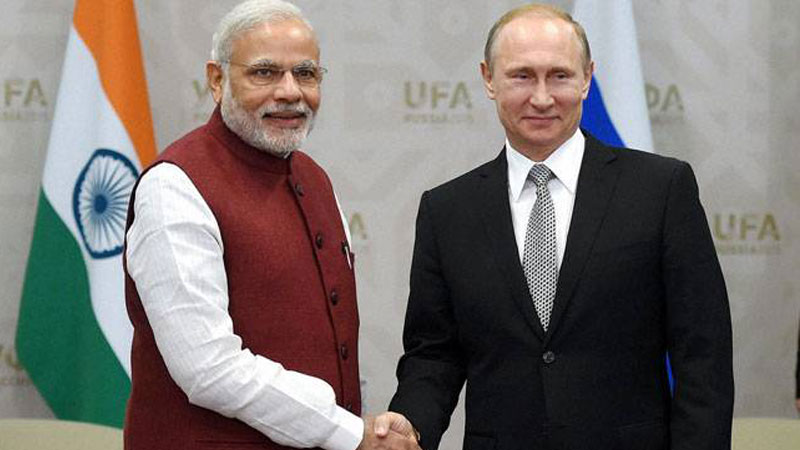 VLADIVOSTOK: Russian President Vladimir Putin on Wednesday will host Indian Prime Minister Narendra Modi for talks on boosting investment and trade, with a special emphasis on energy and arms deals.

The two will meet on the sidelines of the Eastern Economic Forum, which Russia has hosted in Vladivostok since 2015 to boost partnerships with Asian countries amid Western sanctions its 2014 annexation of Crimea.

Politically, there are no disagreements between Russia and India, so the discussion between the two strategic partners will focus on economic matters, said Alexei Kupriyanov, an analyst with the Institute of World Economy and International Relations.

Russia is keen to bring investors other than China into its Pacific region, so the two are likely to sign agreements “regarding Indian investment and presence in the Far East”, he told AFP.

Modi and Putin will start the summit with a visit to Zvezda, a major shipbuilding facility servicing both the navy and the off-shore oil industry.

The two men have known each other since 2001, and Modi pointed out in an interview with Russian state media ahead of the summit that he and Putin enjoy a special relationship.

“Our relationship has special chemistry, special ease,” Modi told the Rossiyskaya Gazeta newspaper. “With each meeting with President Putin, we get closer and our relationship grows.”

Modi pointed out that mutual ties also extend to nature, as every year “Siberian cranes migrate to my home state Gujarat”. And the Indian leader said he planned to discuss tiger conservation with Putin, a lover of big cats.

Russia and India are part of the BRICS group of major emerging economies — alongside Brazil, China and South Africa — and Kremlin foreign policy aide Yury Ushakov said “increasing mutual investments” and “energy cooperation” would be high on the agenda.

Trade between the two countries amounted to approximately $11 billion in 2018.

Moscow and Delhi are also looking at “opportunities to explore hydrocarbons on the continental shelf in the Arctic and the Russian Far East” together, Ushakov said.

Russia and India in 2015 signed a $1 billion agreement to jointly make Kamov Ka-226 military helicopters, part of the “Make in India” initiative to encourage foreign companies to manufacture their products there. But the deal has been pushed back repeatedly.

A major global arms importer looking to modernise its armed forces, India is keen to produce more on its own soil, and in March launched a joint venture with Russia to manufacture AK-203 assault rifles.

Rostec, the umbrella corporation that controls Kamov, is “hopeful” that the summit can kickstart the helicopter project, its director for international cooperation, Viktor Kladov, said last week.

“A major push will be made, definitely,” he said. “All technical and commercial talks are finished” and payment restrictions caused by US sanctions are “not an issue anymore” as the two countries agreed to use national currencies, Kladov said.

A Kamov helicopter painted in the colours of Indian airforce is on view at the forum in Vladivostok, Interfax reported.

The so-called CAATSA (Countering America’s Adversaries Through Sanctions Act) impacts, among other things, making payments in US dollars.

India last year purchased the Russian S-400 advanced air defence systems for over $5 billion, with deliveries to be made by 2023, despite the risk of sanctions.

Modi’s talks with Putin will follow his meeting last week with US President Donald Trump, who has the power to grant a waiver to CAATSA sanctions.