On 19th May2013 a figure was witnessed approaching the Mount Everest Summit, clad and covered with extensive climbing gear. Inside the padded clothes and masked face, one could not have made out whether it was a male or female-when Samina Baig, a 22year old mountaineer, started crying inside the mask on her face. These were actually tears of victory as she realized she had reached the peak of Mount Everest, achieving something that would make a new note in the history of Pakistan and its sports culture.

Ms Baig had been climbingfor 9hours straight -an almost unbelievable feat in itself. She was on her own with a sherpa guide, when she heard the words by the Sherpa to the base camp that still resound in her head today, “A Pakistani girl, Samina Baig has summited Mount Everest. It is here she fell in a Sajda (prostration) of thankfulness and then planted the Pakistani flag firmly on the peaksground. Many of us know her story as it went viral after the event. 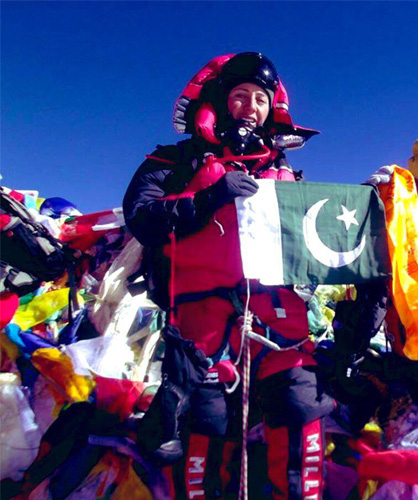 Samina Baig’s story did not end with the momentous climb. She went onto climbing all 7 main summits around the world again putting Pakistan on the map. She is a UNDP Goodwill Ambassador, and advocates gender equality not only as a representative of sportswomen but also because starting from her first climb she was to prove with a global message that girls can, given the chance, do anything.

My first summit in 2010 was ina place called Chashkin Sar.The peak was approx. 6000m. I had no proper trainingat the time. I remember I wore my male cousin’s outfits and I went on this expedition. I was the only girl amongst 6 men on a 12 day expedition. When I reached base camp I was excited but also very nervous as this would be my first official expedition. I remember reaching the base camp and the next day was our rest day. I felt I should go a bit further so I was on my own. I was listening to a Sufiyana Qalam (Sufi Music)by the famous musician, Rahat Fateh Ali Khan and immersed in this mood whileclimbing. It was sunset, and with birds chirping and mountains all around me I kept on going.When you’re away from everything you’re connected to nature and to God.

That moment I suddenly felt that I was on my own, and I thought that I have to come here again and again. Next day we went to ABC (Advanced Base Camp) – it was a 6 hours climb. So at 3am in the morning we started climbing and I wassuper excited. I was wearing normal trekking shoes and borrowed clothes!I summited that mountain and I remember the appreciation that the people gave to me. The residents even named the mountain after me. It is now called Samina Baig Peak!

After that point I knew inmyself I.This was notonly for the sake of climbing alone. We had this purpose in mind that we wanted to push the women infront and change the mindsets of Pakistani women all over.

The Highest Peak on Earth

In May 2013, we were at the last summit push. We stopped at camp 4 and I went on ahead. This last summit push took us 1 week. And finally on my own with the Sherpa I started my final stretch which was 9 hours. I climbed all through the night in the night wearing headlamps. We reached at 7.40am. I cannot ever forget it. I was exhausted few metersbefore the summit and I was literally crying. I was in pain and my legs were going numb but I kept pushing and climbing. I could see it in front of me as my target but it was happening in real time and I could only move as fast as I could do. I had to pace myself as I was really close. I don’t know what was inside of me but I wasn’t going to go back. When you reach the top, it is no feeling that one can describe. First you are thinking through exhaustion and then you have a few minutes to stand there when everything hits you all at once. It the highest plain on the planet so imagine the feeling a person gets. I stood 15 -20 minutes max on that top and I can’t get that moment out of my mind. On the climbback I almost fell down exhausted- but I climbed all the way down and took my rest finally at camp 2. I had climbed then a total of almost 34 hours!

Already when I started the climb back down, people had started calling as the news started going viral that a 5 foot tallPakistani girl had climbed Mt. Everest. It was also the year of the 60thanniversary of the summit being climbed and I was the first Pakistani woman who had done so in its 60 year history. We got calls from our community, diplomats, even the President and PM at the time and of course different Ministers. 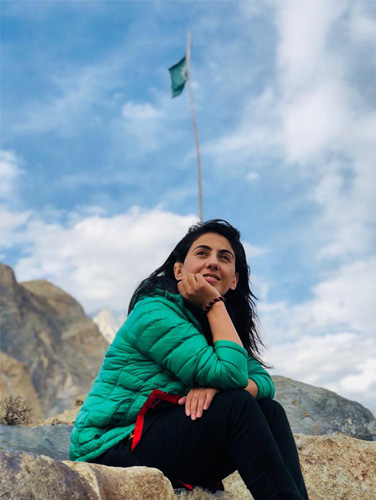 Many people are still not aware of how dangerous the sport it is. In a game on the grounds one can break something and be taken to the hospital. Here one can lose one’s life by a few wrong steps or even if the weather changes suddenly.

The other thing is it is a very expensive sport. The cost of just one set of professional hiking shoes can go up millions in Pakistani rupees. Being froma middle income group family we had no means to buy professional gear so we had to look for sponsorship for our expeditions. And those did not come from internal help.

Here we had these friends whom we met online from social mediafromNew Zealand and it was them who actually helped sponsor us forEverest when they heard about our goals once they visited (in 2012). We call them our angels-if it wasn’t for them all this would not have happened.

In the Face of Negativity

In a pressconference for the Everest expedition in Islamabad, a journalist stood up and in front of the press and he said, “This girl will climb Everest? She looks like she’s not even be able to climb the stairs”. I couldn’t say anything to him at that time. I just knew then I was going to do it and I was going to prove him as well as everybody who doubted me that they were wrong.

7 Summits around the World

After Everest I kept asking myself what next? I knew that this wasn’t the end of my mountain climbing days. There was an American lady who was sitting next to me at the Conference after summit at Everest and she asked me what I wanted to do next. I told her wanted to do 7Summits Challenge. So she asked which one was in the US. I told her about Alaska. She actually personally sponsored the expedition with me in it to Alaska. She is like a motherly figure to me.

A special mention should go to Mr. Aziz Sharrif, a Pakistani Canadianphilanthropist who sponsored two of our expeditions.

Slowly but surely we got sponsorships for all the rest of the summits with people having faith in our abilities and our goals. By 2014 I achieved my goal and had climbed all the 7 Summits around the world at the age of 23.

I was asked to be the UNDP Goodwill Ambassador in 2017. Since then whenever they invite me, I travel and do several conferences and advocating talks on environmental protection, climate change, development and women’s empowerment; which is now my focus to mentor women in this regard.

Training for the Summit

I didn’t have a formal gym training like others have done. We had nothing as we were not in that financial position being farmers.

So each day I used the natural terrain as my “gym”. I built up my muscles and stamina by using what nature had provided me. It was me and a heavily loaded backpack. Sometimes the Margalla hills or whatever mountain I would climb to train that was it!

I’m from Hunza, Shimshal Valley, a small village in Gilgit Baltistan region. I am extremely grateful to my community and AKDN which instilled my sense of values and inner strength. Most girls, where I come from, go to school and are educated.

My father was a farmer and my late mother was just a house wife of a farmer. We are simple people living ordinary lives. All of us 6 brothers and sisters are united and close knit. My brother Mirza Ali is my mentor and trainer and a great support to me. I have had only encouragement from my family, in fact both my (now late) parents prayers is what has kept me going. They are very important in my life.

My Focus, My Pakistan

When I climb or do anything, my focus is not just Hunza, or my community-this was about doing it for Pakistan. It is a youth empowerment objective and how to motivate them as well as Pakistani women in sports. Our goal by taking on the challenges of mountain climbing was achieved as we have seena huge growth in women empowerment through this new awareness in our sports culture. I wanted to motivate the women in our country that they can do anything they want to with their will and strength. And I wanted to create a cultural impact change in the way we see women overall in Pakistan.