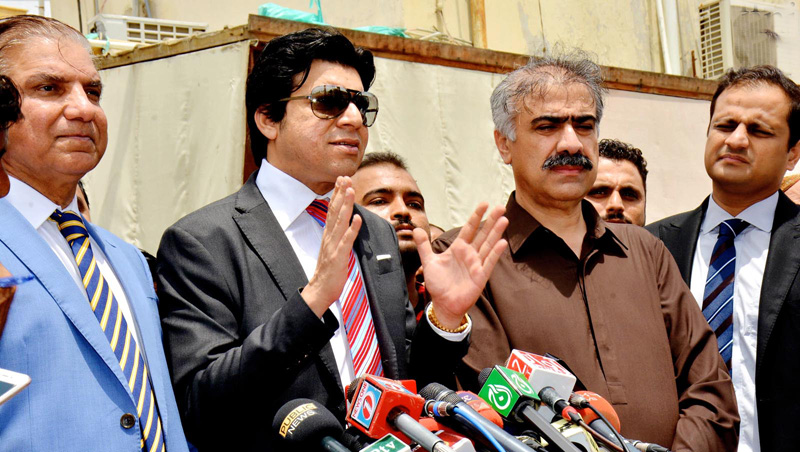 The provincial government and the federal government have agreed to construct a new barrage on Indus River at 45 kilometres upstream Arabian Sea in the south of Thatta and in the East of Karachi to address environmental issues of sea intrusion and land degradation.

The Sindh chief minister said that due to non-availability of water downstream Kotri, sea intrusion had destroyed hundreds of villages in Thatta and Sujawal districts and also badly affected the delta. He added that hundreds of families have migrated from the areas in search of livelihood somewhere else.

Federal Minister for Water Faisal Vawda and Chairman WAPDA Lt Gen (r) Mohammad Hussain giving a briefing to the chief minister said that Indus River is the largest river and is the lifeline of Pakistan.

Downstream Kotri annual flows have been recorded at 27.9 MAF to sea. Flood protection dykes exist on either bank of Indus River stretch, while the flood plain is eight to 12 km.

Chairman WAPDA Gen Mohammad Hussain said that there was a plan to construct 12 meter high Sindh Barrage on the Indus River at a distance of 45 km from sea. He added that dykes on either banks in flood plain would be four to nine meters high. The reservoir in flood plain from the barrage would be 160 km upstream. There would be two canals on each side for irrigation and drinking water in the coastal area.

The chairman WAPDA said that right bank canal would be constructed from Ghorabari to Gharo and Left bank Canal from Sujawal to Golarchi. At this the chief minister said that right bank canal should be constructed up to Dhabejo so that it could provide water for Karachi and the left bank Canal may be taken up to from Golarchi to Thar to provide drinking water to the people Thar.

The WAPDA chief told the meeting that around 56,500 acres land would be acquisitioned which includes 55,000 acres for flood plain, 700 acres for right bank canal and 800 acres for Left bank Canal. The chief minister said that since both canals, right and left would be taken up to Dhabeji and Thar, therefore land acquisition would be more than 80,000 acres.

The meeting was told that conceptual study by WAPDA would be completed by August 2019, feasibility study would be done by Sept 2020, vetting for international consultants by December 2020 and detailed engineering design to be carried out by 2021 and project implementation would start in Jan 2022 and to be completed by December 2024.

The chief minister said that there would be a displacement of various villages, therefore a plan for their rehabilitation or resettlement may also be included in the project. Dr Karim Khwaja suggested that the people who have already lost their lands in sea intrusion should be compensated through the barrage project and the land to be reclaimed from the sea after construction of the barrage must be given lands.

Water Expert Idrees Rajput said that there was proposal for construction of a Delta Channel at Buharo to dispose sea water Buharo Channel in 1970 but it could not be implemented. He suggested the WAPDA to construct Delta channel along with the project.

Special assistant to the CM Ashfaq Memon suggested to construct coastal highway to further stop sea intrusion in the area. He also said that there must be a regulator to control the river water, otherwise it would inundate the nearby lands and destroy the other lands through water logging. He also suggested to constitute a oversee committee comprising experts of WAPDA, Sindh government to keep discussing the concept, the design and other relevant issues of the barrage so that it turn out to be one of the best projects in the country.

The chief minister said that there was a dire need to regulate to regulate the available flows downstream Kotri to provide drinking water, augmentation irrigation supplies, reduce sea intrusion, flood evacuation, sweat ground water and improve ecology of the river.

Chairman WAPDA said that there would be a storage of 2 to 3 MAF water to utilize 4.1 MAF from available flows. It would make flood mitigation for surrounding 75,000 acres of land. He said that the proposed barrage site was on the Indus River 180 km downstream of Kotri, 45 km upstream of Arabian sea, 65 km South of Thatta and 130 km east of Karachi.