Mehreen Hashmi: marking myself a survivor

An up-close and personal with art curator and artist Mehreen Hashmi, who portrays her life and her journey of surviving repetitive sexual abuse as a child through her art, curatorial practice and vlogs.

It is perhaps social politics and taboos that break down voices. There comes a moment when people need a platform they might not have had before. Known to be bold and outspoken, this particular artist is well-known in the art circle in Pakistan. I wanted to understand more about her story, her healing process and the advice she gives to others through her paintings and talks.

Mehreen Hashmi is an artist and an art curator. She has been the curator of the Karachi Art Summit 2017 and reviews art from a curatorial perspective in the magazine Nigaah, a South Asian art publication. 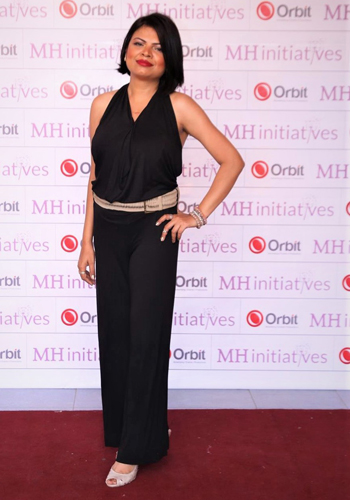 To separate the artist from her background and her life would be a folly. Her childhood trauma has not prevented her from establishing herself successfully. Her story marks the resilience and the determination of a rape survivor to beat all odds and then speak about it.

I was born and raised in Karachi in an Urdu speaking middle-income family. I cannot speak much about the family due to certain legal constraints but I suffered a decade-long abuse in all possible ways. I have been battling with developmental trauma and anxiety disorder because of this. I attempt to create awareness about emotional health as well as the aftermath of abuse on survivors. My work, as an artist, is also a thought-provoking series about abuse, awareness of social taboos and the importance of emotional health in the society. I moved out of my house in my early twenties when I realised that I had had enough. A friend let me stay with her until I found a place of my own. I have been on my own ever since. I initially worked through several jobs for art school and then three jobs, at times, to sustain myself in Karachi.

The process to heal

About that; it is slow. At least, now people are speaking about it and acknowledging it more openly. It was happening for so many years, but people did not want to even hear about it. I remember that only a few years ago, I mentioned the word “molested” and some women told me not to speak out loud or tell anybody about it. I was shut down several times, but I had my work as a release to somehow express what I was going through.

I was shut out not just socially but professionally at each and every level. Even educated people with powerful voices didn’t want to hear me. My inner circle of friends is very much there but let’s face reality, how many actually speak to a survivor knowing what’s happened to them or what they are going through. It is a hard topic to acknowledge.

10 years ago, I was not allowed to do my final thesis as it was on a topic that wasn’t spoken about openly. I wasn’t allowed to exhibit my artwork in Pakistan. I actually exhibited abroad with the hope that one day I would be able to exhibit here. And then a couple of years ago, I started sharing my voice on social media and things changed quite a bit.

People try to put you under a category of “bad girl” if you don’t conform to their ways. But we are human beings and we don’t fade away. We are going through the process of emotional struggle and physical trauma every day.

Digital and social media are playing a positive role and have opened up many possibilities; giving us many individual platforms. Years ago, one had to go to an organisation to speak and even then, there was not much choice. I have personally found that technology helped me voice my thoughts and reach out to thousands. Being in a “global village,” we are connecting to each other locally and internationally in order to talk to each other. The common goal is to put an end to all of this.

What do I want the world to hear?

I do not want to hang my abusers. That is not going to solve anything. It is the dire situation that needs to be addressed and victims need to be accommodated. I have been a victim and I mark myself as a “survivor.” My first priority is not to hurt people intentionally or unintentionally by my work or my way of life. The situation in Dadu some time ago (the molestation and brutalities done to 200 children), was a wakeup call for the country. It helped change public opinion and create awareness in order to save our children.

While I was working, I received anonymous messages of people who had gone through similar ordeals and so many women started coming forward.

But there are so many voices that are still not heard and might never be heard due to the social taboos that make them social pariahs.

I was going forward slowly and gradually as it is dangerous. You become a target of ostracism here and I had to be very careful. I started my vlogs, which reached out to many others. The encouragement of others helps push you forward.

I have noticed that people like talking about it and the victims in the news and publishing articles about it but nobody really wants to hear the voices of the survivors themselves.

We all know the news and we see it going around. People are trying to help, however, just by sharing articles and keeping the topic afloat but not really helping anyone. Perhaps, not everybody has that platform or voice. Also, false sensationalism is what is hurting the survivors the most.

I am working in international pro-active groups, and they are very much in line with how they should be helping. There are people here trying to do things as it is a trending topic but one contained to a few people. The platform needs real help rather than people sharing news to create a stir, just to say they “did something.” We need a functional society together with common goals and we need a society that addresses many things, including sexual as well as mental health. Emotional trauma goes side by side with mental and physical trauma.

I pray no girl ever goes through any type of harassment or assault. My own work comes from the need to address these situations. I also know what happens afterwards and how it affects your relationships and personal life. But addressing the situation as a society or a group is a huge responsibility. We have to do it with understanding. Although I do agree with the #Metoo movement, there are definitely cases of people in privileged society misusing it. This makes it tougher for us out there, who are already struggling for a voice. I have been there as a child who was unable to defend myself. I know the severe trauma and the steps of the healing process.

My work as an artist and curator

My work as a conceptual visual artist narrates my emotional state and my battle with developmental trauma. It was titled “Emotional and Provocative Art” when included in a group show titled “Modern Panic” in London, last year. Besides that, I have been active as a curator in Pakistan and have been promoting local artists and initiating cultural exchange travelling exhibitions. I have now launched my own art company MH Initiatives, which is promoting our culture, art scene, tourism and value of peace on the global level through our on-going projects. MH Initiatives has given me another title; that of a “Social Entrepreneur.”

My other project “Who will attend the funeral?” not only narrates my struggle but also expresses the problems of others as well. I have requested, collected and will narrate other’s stories depicting trauma and emotional health awareness as a part of this project through my artwork. This will be showcased in different countries in the coming years.

My recent on-going cultural exchange travelling project titled “Kabutar” is a travelling exhibition between Italy, France, Netherlands, Turkey and Pakistan. It has been executed under the rights of my company MH Initiatives. Orbit Advertising is our event partner. We hosted delegations from these countries in April and have launched it officially at Alliance Francaise de Karachi.

I curated Pakistan’s first Karachi Art Summit in 2017. My work has been positively reviewed by Marjorie Hussain, an eminent art critic of Pakistan which is a great honour for me. Otherwise, I received the ‘Millennial of Inspiration’ Award by the Dawood Foundation in 2018.

Being grateful and being positive

I have been compensated by the Almighty in so many ways for all I have been through. He has given me strength, courage and energy to work hard and go through my dark days. You can only know your strength when there is no other option besides staying strong.

Achievement for me is a journey, not a destination, it’s an on-going process.

Have faith in yourself; you are the only one who can change your circumstances When you do take a stand, miracles do happen and help does arrive. I am a living proof of this theory. We are all fighting our separate battles, so show compassion and empathy to those around you, that’s the least we can do for each other as humans.

The writer is a Lifestyle Blogger and writer, covering all positive things from Pakistan