* The story revolves around Dr Rabail, who is a young, caring woman 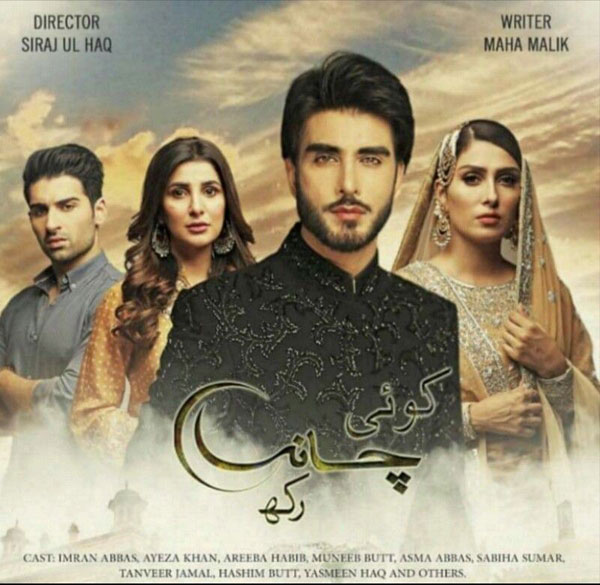 ‘Koi Chand Rakh’ is a Pakistani drama serial that premiered on July 19, 2018 on Ary Digital.

The series concluded on February 14, 2019. ‘Koi Chand Rakh’ has been written by Maha Malik and is directed by Sirajul Haque. It was created by Abdullah Seja of Dream Entertainment. The cast includes Ayeza Khan, Imran Abbas, Areeba Habib and Munib Butt in leading roles.

The story revolves around Dr Rabail, who is a young, caring woman. Her parents passed away when she was only five years old and was raised by her maternal uncle Asad Niazi and his wife Nafisa. Asad Niazi and Nafisa have a daughter and a son of their own, Nishaal and Umair. Dr Rabail, being four years elder to Umair, always takes care of him like an elder sister, but little does she know that Umair has developed feelings for her. When he confesses his feelings to her, Rabail is horrified as she had always taken him as a younger brother. Umair’s mother overhears the conversation and decides that the best solution is to get Rabail married off to someone as soon as possible.

A parallel story runs regarding Zain, the son of a wealthy businessman. Zain is a care free man who is obsessed with beauty. He once sees Nishaal and falls madly in love with her beauty and tries approaching her. A misunderstanding leads him to believe that the name of the girl he loves is Rabail. He meets Nishaal on numerous occasions; first she ignores him but later grows a liking for him too. Zain discovers that the girl he loves is the daughter of his father’s friend, Niazi and sends a proposal for Rabail. Rabail, under pressure from Nishaal, tricks Umair into going to college to study and promises that she would wait for him and would not marry anyone else. Umair is satisfied and happily leaves. However, the original plan of Rabail, Nafisa and Nishaal is to get Rabail married. Nishaal finally finds out that the proposal that has come for Rabail is of Zain. Both Zain and Nishaal are heartbroken because they had fallen in love even though they had not spent much time together. Nishaal tells Zain about her newly developed feelings for him because she had come to see him as her ideal man, but Zain refuses because for the first time in his life, he had made his father proud and happy and Zain doesn’t want to spoil this now. So he sacrifices his love and gets married to Rabail. Umair gets to know about the betrayal and he reaches the nikah ceremony but Rabail is already married to Zain. Umair has a nervous breakdown.

A parallel story runs regarding Zain, the son of a wealthy businessman. Zain is a carefree man who is obsessed with beauty. He once sees Nishaal and falls madly in love with her and tries approaching her. A misunderstanding leads him to believe that the name of the girl he loves is Rabail

Zain tries to make Nishaal jealous by pretending to get close to his fiancée Rabail, but Nishaal gets back at him by flirting with Zain’s best friend Zia. Rabail and Zain are finally married, but Zain leaves Rabail alone at the wedding night because he cannot have a relationship with her. Zain and Nishaal leave their egos and rekindle their relationship. However, their relationship is discovered by Zain’s father Ibrar, who has a heart attack and dies after making Zain promise that he would never divorce Rabail. Zain agrees to fulfil his father’s last wish despite being in love with Nishaal. Zain and Rabail agreed to continue their relationship for the sake of Zain’s dead father, but Nishaal cannot tolerate seeing them together. She instigates Zain against Rabail by telling him about the Umair’s feelings for Rabail and makes her to look a culprit who was responsible for developing those feelings and left after she got bored of Umair. After patching up with Zain, Nishaal starts to ignore Zia totally and he keeps on trying to contact her by calling and messaging her. Zia knows that Zain’s sister Sobia by getting engaged to Sobia and disappearing on the wedding day. Because of Rabail Zia finally realises his mistakes and Rabail gets Zia and Sobia married. Zain and Nishaal get the Nikah done and Zain leaves his house to settle with Nishaal in a new one. Rabail finds out that she is pregnant. She receives tremendous support from Zain’s mother Gulshan in every aspect of her life. Gulshan tries her best to bring Rabail and Zain together. Nishaal tries to persuade Zain to divorce Rabail but for some reasons Zain avoids this. Rabail gives birth to Zain’s daughter Ujala.

A year later, Zain realises that he doesn’t truly love Nishaal, he was attracted to her beauty. In fact, she is a horrible girl who knows nothing about love, family’s values and respects. He realises that he has never been truly happy with Nishaal as she is Shallow. He realises that beauty isn’t everything, someone needs in life. On the other hand, he looks towards Rabail’s moral band cultural values and regrets for not valuing her deep sense of existence. He goes back to Rabail, apologizes for everything, he has done. But it is just not easy to forgive so easily when the wounds are deep. The innocent Rabail turns into a cold-hearted lady. Meanwhile, Gulshan dies due to the separation from her son. Zain is full of guilt and regrets. Zain is guilty about what he did and asks Rabail to forgive him. Meanwhile, Nishaal is furious on Zain who starts having feelings for Rabail. She gets to know that she is expecting. She waits for a whole day for Zain to come at home but unfortunately he doesn’t. She goes to his home and gets a slap from him. In fury, she leaves a report there and leaves. Zain who reads it now goes after her. Nishaal tries to commit suicide but saved by Rabail’s friend. Nishaal blames Rabail for being responsible for the death of her child. But Rabail’s friend tells her that Rabail didn’t even touch her and instead she did her treatment. Rabail gets hurt and leaves.

Umair comes to her house later that day and brings flowers for her as it is her birthday. Zain comes that very moment, but on knowing the truth, doesn’t say anything. He however asks Umair to request Rabail to forgive him for his mistakes. Umair ensures him that he will talk to Rabail. Zain comes to Umair’s house to take her back home but she refuses. Later Rabail accepts Umair. They are shown enjoying the rain which indicates happily ever after for them both. The show ends with Zain regretting his follies.

The show was met with mixed to negative reception throughout its run, being criticised for its clichéd plot and poor characterisation, but was a rating success nonetheless.