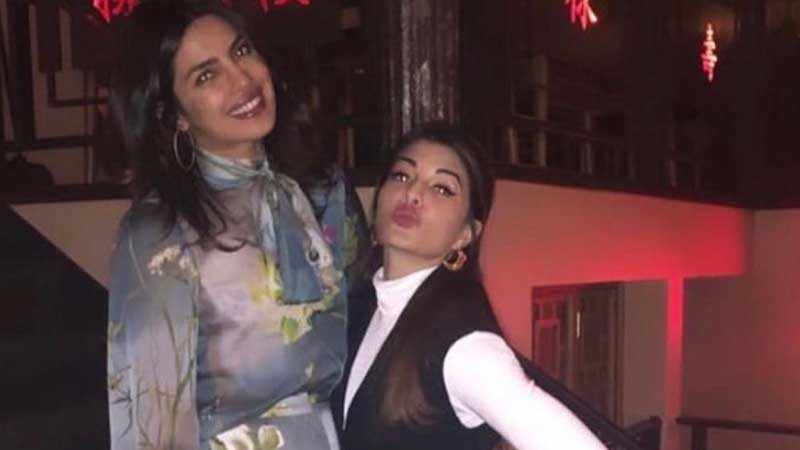 Actor Priyanka Chopra is currently in New York meeting friends and attending work meetings. The actor, who recently made headlines for meeting Hollywood actor Mindy Kaling in the Big Apple, met Bollywood actor Jacqueline Fernandez on her US visit. And the pictures are proof, the two had a lot of fun.

Jacqueline shared a picture with Priyanka in her Instagram stories with the caption, “New York with Queen P!” The latter also shared the same picture along with her reply, “So good to c u love. So much fun!” While Priyanka is seen dressed in a blue jumpsuit, Jacqueline is in a black and white short dress. The actor also shared a picture from her time with her friend’s baby Shireen Shiva Rose.

Priyanka also cheered her sister-in-law to be Sophie Turner ahead of the arrival of the eighth season of her popular television show Game of Thrones. “Good luck @sophiet you are a boss babe. And are very loved.. #jsister #gameofthrones tonight.” While Sophie can be seen seated on the iron throne in all her glory, Priyanka’s pet Diana can be seen sitting beside her on a smaller chair as the Hand of the Queen. The show premiered in India on April 15.

Priyanka has just been confirmed to feature in a Hollywood film, to be reportedly produced and directed by Mindy. According to Deadline Hollywood, the film has been billed as Crazy Rich Asians meets My Big Fat Greek Wedding.

Priyanka had confirmed the same on her Instagram account with a screenshot of a media report along with the caption, “Two women with a passion for telling good stories, just got the green light to THEIR story THEIR way. So proud of this incredible partnership with @mindykaling and #dangoor! We are about to show you what it means to be modern, global, and Indian. See you at the cinema!”

The actor has already completed the shooting of her next Bollywood film, The Sky Is Pink. Starring Farhan Akhtar and Zaira Wasim, the film is set to release on October 11 this year.