French accounts of the popular movement that led to the fall of the monarchy can be divided, at the risk of over-simplification, into two. The first, favoured by many historians of the left, is generous, not without a dose of romanticism, a people anxious to build a new world based on justice and equality. The second, an example of which was given fictional form by the novelist Alexandre Dumas in his four-part work Joseph Balsamo is undoubtedly more realistic, since it describes a population plagued by great social misery. The French press, when it tries to understand and explain the yellow vest movement, tends to oscillate between modern-day versions of these two visions.

A variety of books were rushed to publication following the outbreak of this unprecedented social movement on November 17th, 2018, but the authors, probably wishing to take advantage of the wave of interest it arouses, showed a lack of distance and were often content to simply regurgitate media accounts. The yellow vests accuse the media of being at the beck and call of a political class that refuses to give in to the street, preferring to protect the interests of the wealthy. Politicians retort that they are concerned about the public good and are acting in line with a long-term vision, implying that this escapes the masses.

In a book entitled Yellow Vests. Is this the beginning of a second French Revolution and the advent of tyranny?, Dann Brun writes: “The particularity of an oligarchic government is to deem the wealth of individuals a defining criterion for aptitude in the exercise of power. But the nonsense of such a criterion, in depriving the state of a large number of talented persons otherwise able to serve, scarcely requires demonstration… In such a way citizens are divided into two clans, that of the rich and that of the poor; it [the oligarchy] irremediably breaks the unity of a state, rendering itself, moreover, powerless to ensure and maintain security”. 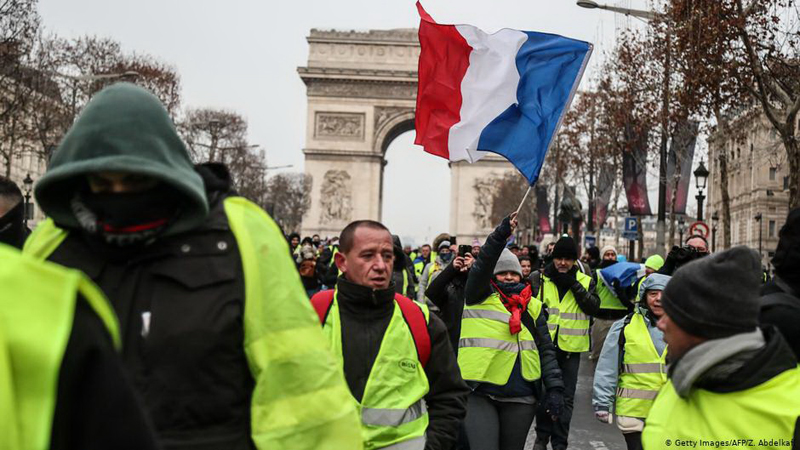 Christian Riehl, in Yellow Vests. A Brief History of Humanity from Al Gore to the Roundabouts. Epilogue 2040, returns to the notion of those left behind, outcasts from society, and the poor condition in which they live, indicating: “And then, against all odds, these social outcasts are claiming that very status for themselves. They drive diesel because they had been encouraged to do so for years. They consume because they have been encouraged to do so for decades. They don’t think straight since there have been discouraged from doing so, making use only of part of their brains for shallow thought. Invisible, they could not recognize their fellows in a crowd. They will wear yellow vests, to be visible, to exist…”. The author adds: “Would the chaos threaten to derail Macron’s great project, his daring social architecture in which the money of the Solidarity Tax on Wealth returned to the richest [President Macron abolished this tax] would trickle down from the top of the Louvre Pyramid [a reference to the speech made by Macron as president-elect, referring to a prestigious modern building in opulent central Paris] into the badlands of the surrounding slums? It’s not good for investors and it’s not good for balancing the books, if Jupiter [the mocking name given to Macron] has to make too many concessions in order to bounce back in the polls”.

On the difficulty to analyse the yellow vest movement

No doubt Ruel is not wrong to say that “the sheep, more often than not, is only a wolf who is only afraid of biting. If individuals get pushed together, the group may soon morph into a hateful crowd….”. This can explain the lack of direction of the movement, at a period when France is worried by a spate of anti-Semitic acts. There is also a conflation of ‘reasonable’ anti-Zionist discourse with racist anti-Semitic remarks. This dangerous amalgam encouraged by part of the political class would risk undermining the freedom of each citizen to freely develop his or her own belief of issues of international politics. Moreover, the government has played on rising tensions to break the movement, using tear-gas to disperse peaceful protesters. More serious still was the use of ‘non-lethal’ or ‘defensive’ crowd-control weapons such as LBD40 rubber bullets and GLI-F4 grenades (deafening or tear gas), which resulted in serious injuries. Since January 30th, 2019, the prefects [senior civil servants who represent the executive power in the department or region they administer] have the power to issue orders banning individuals from taking part in demonstrations if they represent “a threat of particular seriousness to public order”, punishable by six months imprisonment and a 7,500 euros fine. Admittedly, the authorities are to base any such decision on “objective criteria”: incriminated individuals must have been guilty of “serious attacks on the physical integrity of persons or significant damage to property” or of “a violent act” during previous demonstrations. According to a significant section of the political class, this decision threatens fundamental freedoms, normalizing measures earlier permitted only under the state of emergency.

There may be three Frances. The metropolitan France that has seized the opportunity of globalisation; France’s suburbs and minorities that have become a political and electoral force with particular characteristics; and a rural peripheral or small-town France, a peri-urban world that would sometimes support Marine le Pen (President of the National Rally, party on the far right of the political spectrum), comprising individuals with little choice but to travel by car, given that public transport has more or less deserted such areas

The Mindset of the Yellow Vests

In a book entitled Inside the Minds of the Yellow Vests, François-Bernard Huyghe and Damien Liccia are of the opinion that: “The confrontation is also about an ethical vision, to avoid overusing the term ‘values’. Those at the top can afford to buy themselves a clear conscience, the luxuries of showing concern for ecology, love of diversity and minorities, giving them moral security built on the foundation of sound material security. Those who stand up against this are by definition narrow-minded, ignorant of changes in the world…necessarily victims of fantasies and fabrications (perhaps spread by manipulators and enemies of democracy) and quite possibly violent or extremist. But seen from below, it is all about power, justice and promises that should be kept. Protesters, beyond their personal difficulties, refer to the common good, to solidarity, to the mandate that the people have entrusted to their representatives and which is not respected. And, sure enough, it is about scornful lies that are an insult to their intelligence and to their dignity”. And Huyghe and Liccia recall the need to respect the social contract.

In thinking about the yellow vest movement, a number of observers have revisited the geographical analysis of Christophe Guilly which offers a framework for understanding. There may be three Frances. The metropolitan France that has seized the opportunity of globalisation; France’s suburbs and minorities that have become a political and electoral force with particular characteristics; and a rural peripheral or small-town France, a peri-urban world that would sometimes support Marine le Pen (President of the National Rally, party on the far right of the political spectrum), comprising individuals with little choice but to travel by car, given that public transport has more or less deserted such areas.

Huyghe and Liccia counted, among the yellow vests, the presence of 33% of employees [white-collar workers], 14% of workers and craftsmen, and about a quarter not in paid employment (including a large number of retired and women) in short, “the popular layers” that globalisation has left confined to an increasingly modest level of social status. “33% say they are apolitical, 15 percent far-left, almost three times more than those who call themselves extreme-right, 42 percent left and 12 percent right”. In any case, the movement is made up in large part of social groups left behind, especially after the 2008 financial crisis, of individuals hitherto invisible who decided that it was time to stand up and say enough was enough. Nevertheless, these ‘little’ men and women wonder why they have no right to take to the streets and to express themselves, having long sat and watched the political class and the media, pontificating on their behalf, pleading concern for their well-being even as they tried to inculcate, top-down, the lessons the ‘little people’ needed to learn about how the world worked.

Ironising in perhaps questionable taste about the causes of global warming, Riehl points out that the ‘outcast’ believes that “there is confusion as to the person responsible. He even cut off the heating in the kids’ room because of the electricity bill. So, no, really, he can’t be behind global warming. Not him. Ask his neighbors and they will tell you, he pays attention to everything, shopping at Aldi [a cheap supermarket chain], and Carrefour [a more expensive supermarket chain] from time to time when they have special offers or discounts. You can check, he doesn’t waste money, the outcast retains his dignity”. And the author concludes: “Maybe the yellow vest is just the guy who has involuntarily revealed this absurd situation, unveiling in the bright light of day what lies in the dead-end into which the market long ago herded the outcast”.

The writer is working with SDPI as a Visiting Fellow