But, apart from Kim’s broad commitment to denuclearisation, with no set out process and time frame, there was nothing to suggest that there was any real progress at the first summit in Singapore. (What happened in Hanoi at the second Trump-Kim summit, I will come to that later.)

Pyongyang continued to link any further progress towards denuclearisation to the lifting of sanctions, fully or partially, and a declaration or peace treaty to end a technical state of war in the Korean peninsula, which had ended, in 1953, with an armistice.

However, coming after Trump’s earlier ‘fire and fury’ rhetoric and calling Kim Jong-un, the “The Little Rocket Man”, the change of atmospherics at the Singapore summit was a welcome relief. Combined with the suspension of joint US-South Korean exercises, which Trump himself described as provocative, was encouraging; reinforced further with North Korea stopping its run of nuclear and missile tests.

The change of atmospherics from the Singapore summit seemed to suggest to the Trump administration that another summit might create some substantive change. Therefore, the Hanoi summit was meant to be a breakthrough, with Kim going by train all the way through China to Vietnam; apparently having made considerable impression on Trump earlier and seeking sizeable loosening of economic sanctions that were choking NorthKorea’s economy.

‘They fell in love in Singapore’, said President Donald Trump about his first summit with the Korean leader Kim Jong-un. And that was said to be the end of the nuclear threat from North Korea

And there were reports immediately before the summit indicating some sort of an agreement, linking lifting of some or all sanctions with Pyongyang agreeing to substantive and concrete steps towards denuclearisation. This might also include a peace treaty/declaration to formally end the state of war in Korea.

It was, therefore, a great disappointment all around when the Hanoi summit ended abruptly without any kind of a joint communiqué or declaration, and with nothing to indicate any further advancement. Both sides seemed to want more than the other was willing to offer.

Kim wanted substantial lifting of sanctions in return for suspending/ending the work at the Yongbyan reactor, which produces weapons-grade plutonium used to build nuclear bombs. 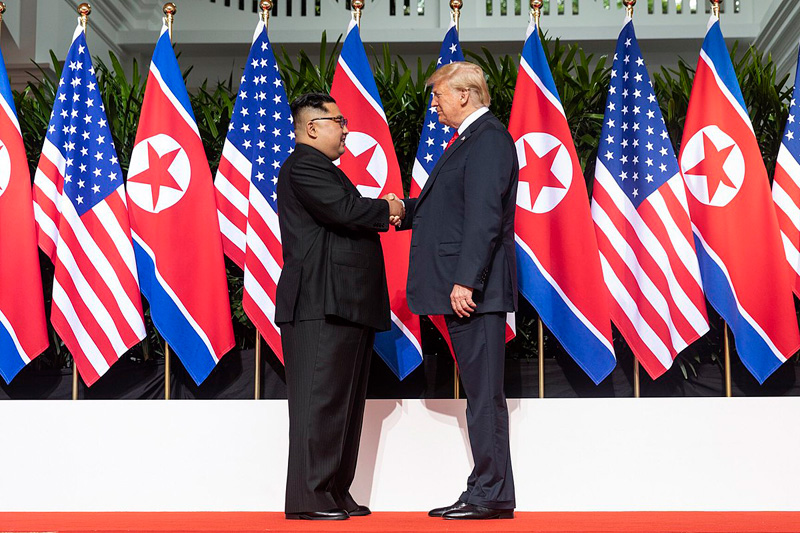 Indeed, if recent reports from South Korean intelligence agencies, as quoted by its Yonhap news agency, are true, North Korea’sYongbyon reactor had not been operational for quite some months. This concurred with a report from the UN atomic watchdog.

Could it be that a renewed commitment from Pyongyang to keep Yongbyonnon-operational wasn’t considered a new concession, and the US wanted more, possibly open access to nuclear sites to supervise a comprehensive program of denuclearisation?

North Korea, on the other hand, favours a synchronised process of denuclearisation of the Korean peninsula (including the withdrawal of US forces from South Korea) with the lifting of economic and political sanctions.

It is reported that, at the suggestion John Bolton, President Trump’s national security adviser, the US also wanted to include North Korea’s chemical and biological weapons as part of the overall denuclearisation program. If true, it would appear that the agenda for the summit was expanded beyond what was envisaged.

The picture is further complicated with reports that North Korea is restoring a major testing site, which it reportedly had disabled/destroyed following the Singapore summit. Indeed, it might be ready to do some long-range missile testing.

When asked at a press conference about this report, based on South Korean intelligence sources quoted by itsYonhap news agency, President Trump expressed his disappointment if these reports turned out to be true.

It is a murky picture when it comes to North Korea’s commitment to denuclearisation. However, despite the apparent breakdown of the Hanoi summit, Trump is hoping that the diplomatic process of advancing denuclearisation will somehow continue, though it is hard to see where things will go from here.

Trump seems to believe that his supposed personal chemistry with Kim will overcome difficulties, especially when he enthusiastically trumps out the great economic potential for North Korea from peace diplomacy by way of foreign investments, trade opportunities, tourism and so on.

Which may be true, if North Korea were willing to fundamentally give up its nuclear program.

In this regard, Kim and his administration might not have forgotten that giving up his nuclear ambitions did not save Libya’s Gaddafi from being overthrown during the Arab Spring; with the US and other Western countries using their military power against his discredited regime.

For Pyongyang, their nuclear deterrence is the ultimate protection against supposed US designs to destroy the Kim regime. Trump, the supposedly ultimate deal-maker, might be over-estimating himself.