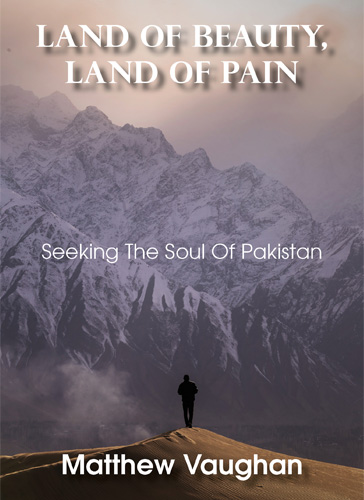 Matthew Vaughan’s second book Land of Beauty, Land of Pain – Seeking the Soul of Pakistan was launched at a café in Islamabad.

Matthew Vaughan is an Englishman who moved to Pakistan with his wife and son in 2011. Since then, they chose to raise all four of their children in the country.

Vaughan was born in Woking, England and studied Modern Languages at Balliol College, Oxford. His first book titled Notes from a Sacred Land – Tales of Hope from Pakistan was published in 2017.

His second book was published in November 2018. It was published partly in response to a remark by someone Vaughan met at a literary festival in Lahore who said that the briefness of his first book could be attributed to the theme his book dealt with; the positive side of Pakistan. The person’s remark suggested that one that could only have limited content about Pakistan that was positive. It inspired him to write the latest book.

In it, he attempts to answer the question of, ‘What is Pakistan about?’ and does so now to a wider audience.

Notes from a Sacred Land garnered attention from people all around the world, including many overseas Pakistanis who wondered how a foreign man had the gall to move and settle in Pakistan with his family.

Notes from a Sacred Land garnered attention from people all around the world, including many overseas Pakistanis who wondered how a foreign man had the gall to move and settle in Pakistan with his family

Vaughan says that he was encouraged to publish after the success of his first book, “There was a market for it and the story was worth being told so the second one was a natural movement.”

He added that, “A dozen books could be written about Pakistan. It is a surprising country which is not covered enough in the media and there are not enough foreigners’ perspective’s on Pakistan.”

He emphasises that a foreigner’s perspective is certainly not the most important one but just one to add to the many diverse experiences faced in Pakistan.

Vaughan refers to the stories in the latest collection as, “Amazing stories in difficult circumstances. All the heroism and the selflessness does not make the headlines. Why do all the negative stories make all the headlines and not these ones?”

Vaughan also found that there was no significant market for a positive book on Pakistan, as reflected in most book stores across the country.

“There was not as much enthusiasm about the book amongst publishers. An Englishman writing a positive book on Pakistan did not fit any simple categories.”

The response to Vaughan’s book can be gauged perhaps by the reluctance of publishers to put his first book into bookstores. The lack of marketability of the book made booksellers withdraw from the idea which eventually led to his decision to self-publish.

Land of Beauty, Land of Pain is inscribed with poet and philosopher Muhammad Iqbal’s verse in the opening page of the book and beside it, one from the Bible, ‘The light shines on the darkness, and the darkness has not overcome it. John 1:5’.

Vaughan’s book makes the local reader question; what must one do to improve the impression of Pakistan the world over? Moreover, it harkens to the age-old truth, ‘To change the world, we must change ourselves.’ To see clearer and perceive this nation in a better light.

The writer is a freelance writer and journalist. She can be reached at humaira.saeed@uq.net.au and Tweets @SaysHumaira