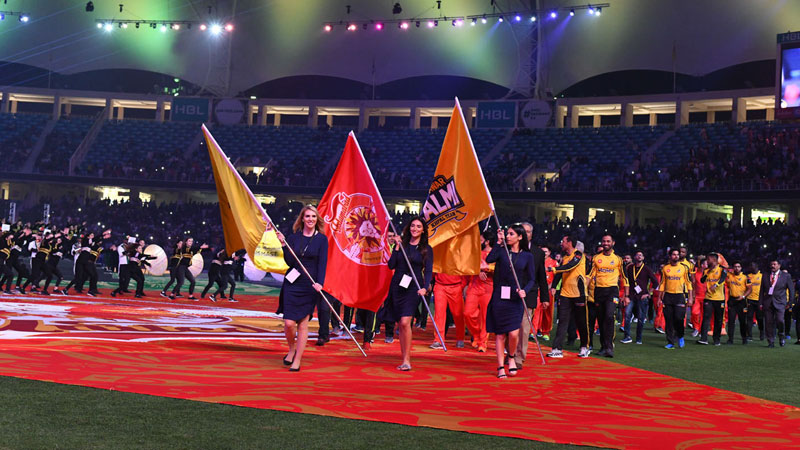 The fourth edition of Pakistan Super League (PSL) commenced with a colourful and dazzling ceremony here Thursday evening. Thirty-four high drama matches will be played in the PSL — eight in Pakistan including the March 17 final — with Islamabad United as defending champions of the six-team competition. The other five teams are Peshawar Zalmi, Quetta Gladiators, Karachi Kings, Multan Sultans and Lahore Qalanadars. The Dubai stadium was adorned with huge banners of all six franchises with an iconic stage the focus of a capacity crowd. The ceremony opened with the national anthem of Pakistan as everyone stood up in respect. Former captain Ramiz Raja, the voice of Pakistan cricket, acted as the host of the function as he called upon the fans at the stadium and around the world to be ready for the start of the PSL. Mohammad Aurangzeb, CEO and President of Habib Bank — the title sponsors of the PSL since its inception — reiterated his bank’s promise to promote Pakistan’s cricket through their sponsorship. Pakistan Cricket Board chairman Ehsan Mani welcomed the teams, fans, viewers and all those who are involved in the staging of the yearly carnival of cricket.

Mani made way for a marching band that played Europe’s The Final Countdown – famous for being the tune of the 1992 World Cup, which the Pakistani national team won under the captaincy of incumbent Prime Minister Imran Khan. Euro-Caribbean Boney M were next. The highlight of their set was their trademark track: Daddy Cool. Pop sensation Aima Baig serenaded the audience with her rendition of Nazia Hasan’s famous Disco Deewanay. She was also joined by Shuja Haider on stage. Legendary Junoon rockers Ali Azmat, Salman Ahmed and Brian O’Connell were the penultimate act. They kicked off their set with their smash hit Yar Bina before tearing into Heeray. The trio’s lip-syncing session predictably ended with Jazba Junoon. Fawad Khan was the final performer of the night. He treated the crowd with the official PSL 2019 anthem Khel Deewano Ka. He was joined by rapper Young Desi for a cameo.

As the duo performed, the six teams and their players walked out in the middle. The confetti rained, the lights flashed, the pyrotechnics took over – the 2019 PSL was officially underway. The opening ceremony was a landmark as it was the longest augmented reality show for the Live TV ever. The augmented reality is a technology that superimposes a computer-generated image on a user’s view of the real world, thus providing a composite view. The Pakistan Super League is a T20 format cricket tournament set up by Pakistan to facilitate the international exposure of its young and upcoming talent as well as give more seasoned players from within Pakistan and outside a platform to entertain fans globally and within the country.