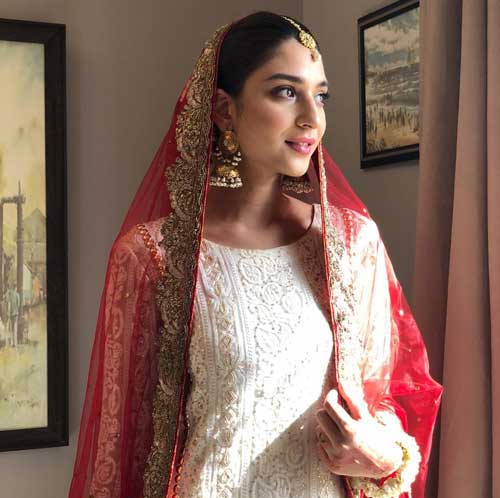 Ramsha Khan is a well-known face of the industry now. While other newbies of her time are still trying to embark on their media journey, Ramsha Khan has successfully won millions of hearts with her determination and proficiency in her work.

Her chameleon-like ability to become any character she plays has helped her since 2016. On top of that, she is stunningly beautiful. Although her career started with a small role, Khan has become the queen of dramas with her hard work and dedication. And the best part is that reign of Khan has just begun.

These days, two of Khan’ dramas, ‘Khud Parast’ and ‘Kaisa Hai Naseeban’ are on-air simultaneously. However, both of her characters, Uswa and Maryam, are poles apart. While Uswa is head strong and vocal about her opinions, Maryam is shy, sweet and brought up in a very protective environment. Khan is equally brilliant in both of these characters and her phenomenal acting skills make these characters more convincing. While Maryam is a straight-forward, girl-next-door character who has to go through tough times after getting married, the character of Uswa has multiple layers. Although it is easy to feel resentment towards Uswa, you cannot help yourself from sympathising with her at times.

However, Khan portrays it effortlessly. From her facial expressions to dialogue delivery, Khan makes it hard for us to take our eyes off the screen. With her superb acting, she makes Uswa’s point of view clear and logical. Even if you seem to disagree with the character, Khan’s portrayal of it makes us want to hear her out. Similarly, Khan portrays Maryam’s character in such a persuasive way that you can feel her agony and hardships. It’s no easy job playing so many diverse and different characters but Khan’s acting leaves us mesmerised.

She has obtained immense appreciation for her work and rightly so.

It’s not a small feat to achieve so much at such a young age. It takes years for actors to reach the level of success Khan has reached in a short span. Not only is she a great actress, she is experimenting in the field of modelling as well. She has done many ads, fashion shoots and magazine covers. Khan and her acting feel like a breath of fresh air in the seas of dramas and actors. We wish her all the best for her future which is definitely a very bright one.