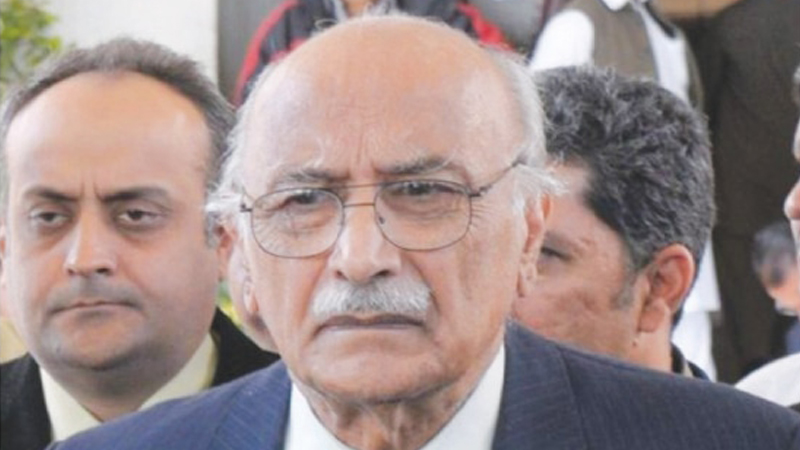 While hearing the long-running case filed by late air chief marshal Asghar Khan, the Supreme Court on Monday ordered that the inquiry against Pakistan Army officers involved in the case be completed within four weeks, a private TV channel reported.

A three-judge bench headed by Justice Gulzar Ahmed heard the case. The late air chief marshal had petitioned the apex court in 1996 alleging that two senior army officers and then-president Ghulam Ishaq Khan had doled out Rs 140 million among several politicians to rig the 1990 polls against Benazir Bhutto.

Ordering that the inquiry against the Pakistan Army officers involved in the case be completed within four weeks, the top court also directed the Ministry of Defence to submit a reply regarding implementation of its 2012 verdict in the Asghar Khan case. The court declared that the Federal Investigation Agency’s report will be reviewed along with the Defence Ministry’s reply. “We will review whether the court order was implemented or not,” it remarked.

During the hearing, Justice Gulzar reprimanded the ministry for its failure to initiate court martial proceedings against the officers. “Why did the Ministry of Defence not initiate action for the court martial of the Pakistan Army officers involved?” In response, the attorney general said, “The inquiry process is underway and the matter will move forward once the inquiry is completed. Court martial can be done anytime if it is a case of fraud or loss to the national exchequer,” he added.

Justice Gulzar remarked that the Muttahida Qaumi Movement (MQM) founder was also given money but his name neither appeared in the case nor in the FIA report. However, the attorney general said, “The MQM founder’s name was mentioned in the FIA report. He is not in Pakistan. Talks are under way with the British government for the repatriation of MQM founder and other accused and a major headway is expected soon.”

During the hearing, Justice Gulzar said it seemed that the Federal Investigation Agency (FIA) had also lost interest in the case. The court ordered the defence ministry to ensure that its orders are implemented and due action is initiated against the military personnel. The hearing was adjourned after the court issued directives to the defence ministry to submit a reply in a month’s time.

The developments come after the FIA, on February 9, approached the apex court for guidance in gathering sufficient evidence in the Asghar Khan case. In its final report submitted in the court, the FIA pointed out several reasons due to which the investigation could not reach a logical conclusion. “The FIA has left no stone unturned to trace the evidence related to the disbursement of alleged money to politicians. All the important witnesses including Brig (r) Hamid Saeed were examined. Bank records were scrutinised and statements of concerned bank officers [were] recorded. Politicians were interviewed. Assistance and information from PEMRA, NAB and ministry of defence were sought. More than 190 television programmes were analysed. [The] Ministry of Defence was contacted to provide information regarding the details required to find necessary evidence,” the agency maintained in its report.

According to the FIA, one of the factors hindering the investigation was that no army officer gave any statement of handing over money to any private person directly. “Documents provided by Brig (r) Hamid Saeed show that money was distributed in Sindh, but the officers who actually distributed the money were not disclosed by him. Moreover, the receipts of receiving money by the politicians, as mentioned by Brig (r) Hamid Saeed, have not been provided to the FIA. According to Brig (r) Hamid Saeed, these receipts were sent to GHQ, but upon asking by FIA, Lt Gen (r) Durrani denied having information of any such receipts,” the FIA report revealed.

“The intelligence agency team responsible for distribution of funds in Punjab and elsewhere could not be ascertained despite FIA writing to Ministry of Defence asking about whereabouts of intelligence agency personnel mentioned at Para-9 of Supreme Court’s judgement dated 19-10-2012,” read the FIA report. The agency also admitted that it had failed to verify the money trail. “Certain bank details have not been provided, which would complete the money trail required for prosecution purposes.”