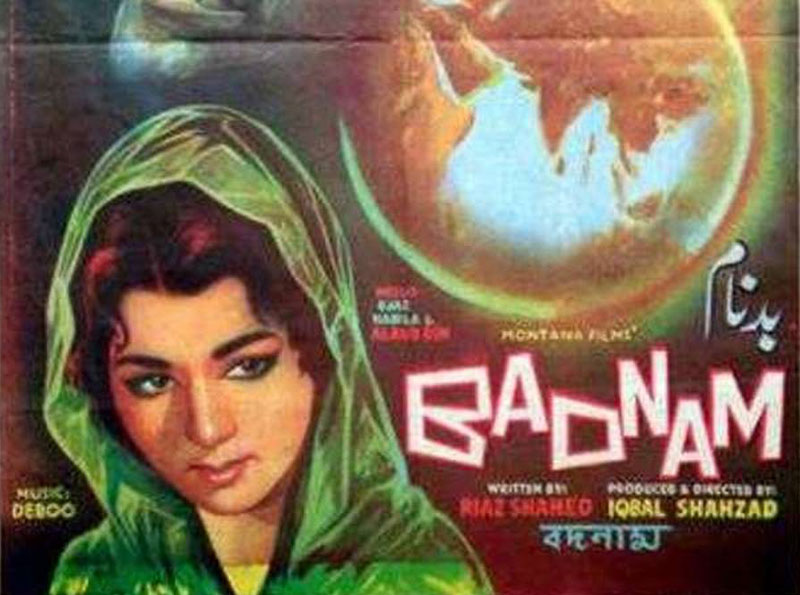 The team now moved on to their next production of another beautiful movie ‘Beti’, starring Neelo and Ejaz, and directed by Raza Mir. ‘Beti’ was released in 1964.

The opening scene shows Neelo, who is playing an actress, get shot and killed by a villain. Director Talish appreciates the shot but Neelo feels unwell and goes to a doctor who tells her that she is pregnant. Neelo does not want a child and begs the lady doctor for help. Finally she gives up on her husband’s insistence and love and gives birth to a baby girl.

Fresh and beautiful again, the actress returns to complete her film’s shooting, the dance number ‘Chanan Chan Chana Chun Chun Bichwa Bole’, rendered by Naseem Begum in a scintillating tune by Deebo. The marriage breaks up because of Neelo’s involvement in her films and the child gets neglected. Ejaz leaves with her daughter but the girl is abducted by child lifters. Neelo looks for her daughter and Nurjehan renders a song ‘Raat Ki Palkain Bheegi Hui Hain, Toot Rehain Hain Tare, Ab Tau Aa Jaa’ lip-sync by Neelo. This is a very sad melody full of pathos. The background musical score is also very effective.

One of Deebo’s most everlasting melodies is hit song ‘Bare Bemurawat Hain Ye Husn Wale, sung by Suraiya Multanikar and picturised on Nabeela

Entry to Pakistan and active years as a music director:

Baran returned to India but Deebo decided to remain in Karachi. He composed music for three films ‘Maska Polish, released in 1957, ‘Yeh Duniya’ (1960) and ‘Lakhoun Fasane’ (1961).Unfortunately all three films flopped at the box office.

We have already mentioned that Deebo’s success was because of his music in ‘Banjaran’ in 1962, especially due to the impact of the song ‘Na Jane Kaisa Safar Hei Mera’ by Nur Jehan.

This was an Urdu film based on Saadat Hasan Manto’s short story ‘Jhumke’. Critics say that during a short life of forty two years, Manto depicted the emotional hollowness of a semi-feudal society that was incapable of giving its citizens the material or intellectual wherewithal to lead a complete human life. The film, after more than fifty years of its release, is considered as one of the biggest hits of Pakistani cinema. However, Iqbal Shehzad, while partly succeeding in presenting the gist of the story, became a victim of the same Victorian morality Manto spent much of his life protesting against.Suraiya Multanikar had mentioned to me in one of her interviews that her ‘pehchan’ (identity) was due to her song ‘Bare Be Murawat Hain’, which originally was a private song. It was much later that Masroor Anwar rewrote it for ‘Badnam’. Suraiya said that she had first rendered this song at Gordon College, Rawalpindi during a music concert. The tune of ‘Bade Bemurawat Hain’ was used by Indian composer duo Nadeem-Shravan — whose oeuvre comprises quite a few ‘tune-lifts’ from Pakistani songs — for the number, ‘Mohabbat Se Zyaada’.

After separation of East Pakistan, Deebo went to Bangladesh. After spending nearly two decades there, it is reported that he expired in the early 90’s. I do not know if he worked there or not. It is rumoured that Deebo was ready to embrace Islam in order to marry Firdausi Begum, another singer from East Pakistan and well established in the Pakistani film industry. Firdausi Begum however was not willing to permanently settle in West Pakistan (Karachi), so both parted ways.