The US in Afghanistan: Trump’s card?

One needs a closer look at the facts on ground. Report card by Al Jazeera states, “According to a report by the Special Inspector General for Afghanistan Reconstruction (SIGAR), as of January 31, 2018, 229 districts were under Afghan government control which is about 56.3% of total Afghan districts. Fifty-nine districts, approximately 14.5%, were under rebel control. The remaining 119 districts, about 29.2%, are contested – controlled by neither the Afghan government nor the rebellion.” (2018) The Pentagon also has 25,239 private security contractors deployed in Afghanistan. (Radio Free Europe December 21, 2018). An additional force to support the Allies on ground in Afghanistan.

Over 111,000 Afghans, including militants, soldiers as well as civilians are estimated to have died since 2001 (Crawford, Neta (August 2016). “Update on the Human Costs of War for Afghanistan and Pakistan, 2001 to mid-2016” (PDF) (watson.brown.edu)  Nicolas J S Davies writing for Consortium News (April 25, 2018) “For Afghanistan, I estimated that about 875,000 Afghans have been killed.  I explained that the annual reports on civilian casualties by the UN Assistance Mission to Afghanistan (UNAMA) are based only on investigations completed by the Afghanistan Independent Human Rights Commission (AIHRC), and that they knowingly exclude large numbers of reports of civilian deaths that the AIHRC has not yet investigated or for which it has not completed its investigations. UNAMA’s reports also lack any reporting at all from many areas of the country where the Taliban and other Afghan resistance forces are active, and where many or most US air strikes and night raids therefore take place.” 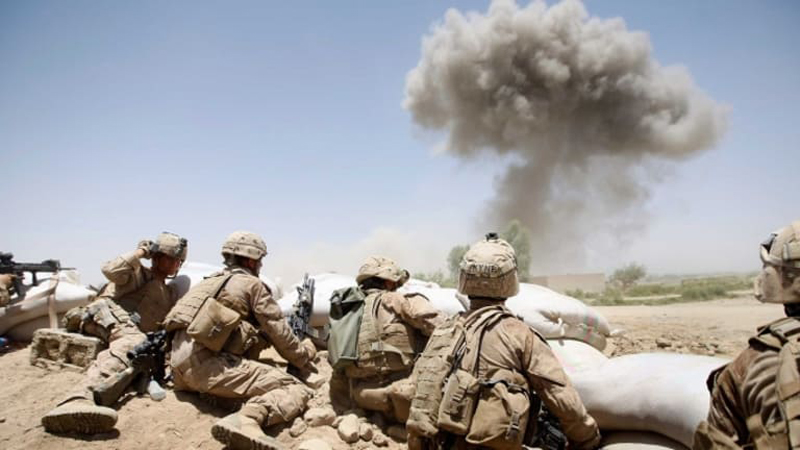 The picture is not pretty. The gains by Taliban over territorial control have increased, there has been no improvement in institutional and structural reforms in Afghanistan, the present government; a puppet of US remains and shall continue to remain reliant on the US for functioning. What the US has tried over years, is to do more of the same. No approach, different from those being followed for years have been tried. Military confrontation has not worked. Talks have not worked. The second mainly because of extremely different viewpoints of stakeholders involved. Only a miracle can lead to one tangent of agreement between all. So the choice is to either continue with more of the same or try an out-of-box solution. The world is comfortable with more of the same, mainly because of fear of what the outcome of an out-of-the-box solution may lead to. If it backfires then can it be ‘fixed’?

Trump’s decision to withdraw around 7,000 troops from Afghanistan, roughly half of American troops stationed there, has created shock waves around the world. Most deem it as a step that weakens Allies position in Afghanistan to reach a negotiated peace settlement while giving a leverage to the Taliban. According to most analysts, ‘security situation in Afghanistan is likely to be exacerbated by a US troop reduction.’ But will it?

Trump had departed from his original stance to bring an end to the conflict in Afghanistan which was not only draining resources but also costing lives with increasing forces in Afghanistan. Unlike other US Presidents, Trump being a businessman cuts losses and seeks alternate remedies to correct a bad situation. All may not agree with a particular strategy in the given case but ‘more of the same’ is just not working.

Fazel Fazly, Chief advisor to the President of the Islamic Republic of Afghanistan on December 20, 2018 tweeted, “If the few thousand foreign troops that advise, train & assist, leave, it will not affect our security, in the past four & half years our security is completely in the hands of Afghans and the final goal is that ANDSF will stand on their feet to protect & defend the soil on their own.” This may or may not be a good prediction however, it does reflect a mood of the political dispensation.

The Taliban have repeatedly demanded exit of the US and NATO troops before peace talks can be constructive. The withdrawal of partial troops by the US sends the message to them that the forces are serious about a negotiated peace settlement in Afghanistan. It will lead to reduction in confrontational tactics from both sides and a better chance for a workable exit strategy.