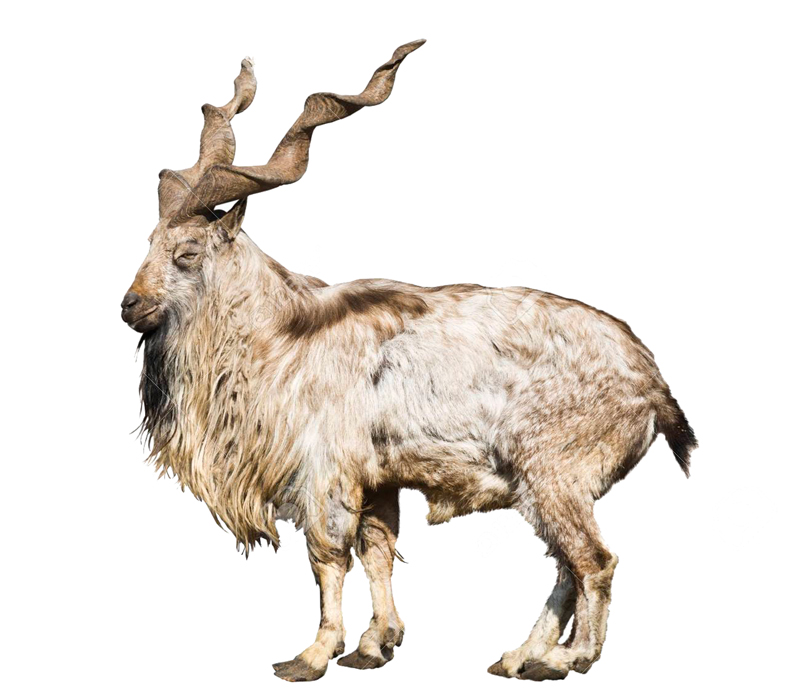 The national animal is the animal which is chosen by a country as a unique symbol of that country, every country has its own National Animal and it is used by unifying image of the nation in front of the world. The National Animal is selected carefully considering their ecology, tradition, culture and mythology. The National Animal of Pakistan is Markhor. The word Markhor is derived from the Persian language, Mar means snake and Khor means eater, this is because of the Markhor’s ability to kill the snakes and also their horns are like coiling snakes.

Our Inter-Services Intelligence (ISI) has chosen Markhor as their official symbol, because it is the sign of bravery for all the ISI officers and the duty of ISI is to protect the Pakistanis from any kind of danger like terrorism. It can be due to the two reasons one is because the Markhor is the National Animal of Pakistan. The other reason is that it may be related with the incidence that once there were Markhors living on the top of mountain for killing the most poisonous species of snakes which were teasing the human beings, Markhor was there to protect the human beings and ISI also protect us from our enemies so they selected Markhor as their official symbol. In 2018, Pakistan International Airlines (PIA) has also decided the Markhor as the logo on the tail of every PIA.

The habitat of Markhor is on the top of the highest mountains, almost between 600-3,600 meters in elevation. They typically inhabit scrub forests made up primarily of oaks, pines, and junipers where there is plenty for the Markhor to eat. They are found in the Northern areas of Pakistan like Gilgit Baltistan, Neelam Valley Kashmir, Chitral, Hunza Valley, Kalash Valley and also in Quetta. Markhor is herbivorous animal that primarily grazes on a variety of vegetations including grasses, leaves, herbs, fruits and flowers. Like other wild goats, the markhor plays a valuable role within their ecosystem as they chew the leaves from the low lying trees, spreading the seeds in their dung.

The Markhorshave massive body; usually their bodies are greyish, with white chests and underbellies, but sometimes this coat is a reddish colour. Their legs are black and white and their faces are dark. Like humans,Markhors wear different clothes for different seasons, their coat grows and sheds off depending on the time of year. In winter the coats grow longer and thicker to insulate their bodies
and in summer, the coats are shedder off. The hooves of the Markhors are wide, helping them balance when climbing or simply walking in their often uneven habitat. With the help of these hooves they did not fall from the highest mountains.

The Markhors are sexually dimorphic, which means that the male and female species do not look exactly the same and are easily distinguishable from one another. For Markhors, the biggest difference is seen in their size, with males weighing twice as much as females. While both have beard like hair, the male Markhor’s hair is considerably longer and thicker. The Markhor can be either social or solitary; their behavior depends on their sex. Females usually travel in small herd containing eight to ten members, and are very social with each other. On the hand, males spent their most of the time alone.

Male Markhors use their horns for fighting for the females of their desire during mating season. To win the desired female’s interest, her male partners will fight aggressively by interlocking horns and wrestling until one of them falls over. The last male standing wins the prize. Breeding patterns for Markhors are much like those of typical goats. The gestation period for pregnant female Markhors is 135 to 170 days. Rings appear on their horns, by looking at those rings one can tell the age of the Markhor.

The Markhors breed only once a year, usually giving birth to one or two kids. Female become sexually mature at the age of 2 years and males become sexually mature at 5 years. Unlike many other animals, Markhor mating typically occurs in the winter. Babies are usually born in a shallow hole in the ground sometime between late April and early June. Mothers provide all the nourishment and protection for their kids, with male Markhor plays no role in parenting. The young ones are able to live free at the age of six to seven months of their age.

Despite of the fact that Markhor is our National Animal, its population is becoming low day by day. Male Markhor can live up to nine years but as its ageincreases and its body begin to shrink, it can become an easy target for natural predators including grey wolves and snow leopards. Then they are also exposed to natural disasters such as floods, land sliding and rolling stones.Humans are the primary predators of Markhor, hunting of Markhor are very common in the Northern areas; people from different areas go to Gilgit and Chitral for hunting the Markhors.The reasons due to which the people are interested in hunting of Markhor are that the one who hunt the Markhor in first attempt is awarded by the trophy of Markhor’s horns. And the horns of Markhor are used in medicines by the Asian market of medicines and also the meat of Markhor is used in human’s diet. Other animals which prey on the young Markhors include Golden eagles, Himalayan lynx, Leopard cats, Snow leopards, Wolves and black bears. One of the major threats is the poaching of Markhor. The most important types of poachers are the local inhabitants, state border guards, the latter usually relying on local hunting guides, and Afghans illegally crossing the border. Poaching causes the fragmentation of the population and distribution areas into small islands. One other reason includes the environmental pollution such as plastic bottles, shopping bags and other forms of throw-away items harm the environment which indirectly harms Markhors.

The International Union for the Conservation of Nature and Natural Resources (IUCN) has classified Markhor as an endangered species, which means that it is in danger of extinction in the near future.According to the KPK Wildlife report, in 1993 there were 275 animals throughout Pakistan but now the population of Markhor is 3500. In Pakistan, the Markhor’s population has been recovered now, so Pakistan has requested IUCN to remove its name from red list.

As the Markhor is our National Animal, it is our responsibility to protect it from every type of threats it has. There is a law in the KPK that if someone hunts Markhor illegally, he will be having different types of punishment like fine of RS.3, 500,000. If foreigners want to hunt Markhor, they have to make a license of 6500 dollars. There are some organizations which are playing an important role in protection of Markhor like WWF, Pakistan Zoological Society and KPK Wildlife and Biodiversity. They are trying to protect Markhor from poaching, hunting and also from the natural disasters like floods etc.