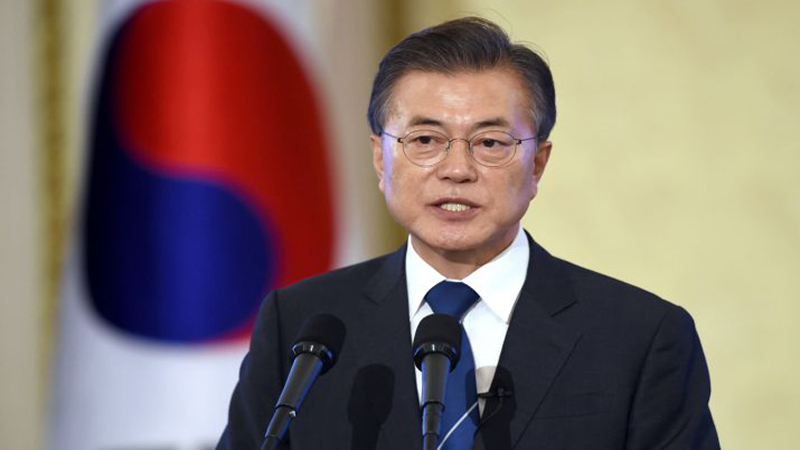 South Korean President Moon Jae-in travels to Pyongyang this week for his third summit with Kim Jong Un, looking to break the deadlock in nuclear talks between North Korea and the United States.

Moon — whose own parents fled the North during the Korean War — flies north on Tuesday for a three-day trip, following in the footsteps of his predecessors Kim Dae-jung in 2000 and mentor Roh Moo-hyun in 2007.

No details of the programme have been announced, but Pyongyang is likely to pull out all the stops to create a good impression, with tens of thousands of people lining the streets to welcome him.

The visit comes after the North put on its “Mass Games” propaganda display for the first time in five years.

The new show featured imagery of Kim and Moon at their first summit in April in the Demilitarized Zone that divides the peninsula — prompting the unusual sight of tens of thousands of North Koreans in the May Day Stadium applauding pictures of Seoul’s leader.

One diplomatic source predicted the visit would see “Kim and Moon together receiving the same sort of applause”.

But while the Panmunjom summit was high on headline-grabbing symbolism, with Moon stepping briefly into the North and the two sharing an extended one-to-one woodland chat, pressure is mounting for substantive progress.

Moon was instrumental in brokering the historic summit between US President Donald Trump and Kim in Singapore in June, when Kim backed denuclearisation of the “Korean peninsula”.

But no details were agreed and Washington and Pyongyang have sparred since over what that means and how it will be achieved.

At the same time the US and South have sometimes moved at radically different speeds in their approach to the North.

Moon will try again to “play the role of facilitator or mediator”, said his special advisor on foreign affairs Moon Chung-in.

“He believes that improved inter-Korean relations have some role in facilitating US-DPRK talks as well as solving the North Korean nuclear problem,” he told reporters, using the North’s official acronym.

Last month, Trump abruptly cancelled a planned visit by Secretary of State Mike Pompeo to Pyongyang, after the North condemned “gangster-like” demands for what it called its unilateral disarmament.

Washington has been adamant that the North carry out a “final, fully verified denuclearisation” first, while Pyongyang is demanding a formal declaration from the US that the Korean War is over.

But Kim has since sent Trump a letter seeking a second summit and held a military parade for his country’s 70th birthday without showing off any intercontinental ballistic missiles, prompting warm tweets from the US president.

North Korea will want to exploit Trump’s eagerness to declare progress before the US midterm elections in November to secure concessions, said Go Myong-hyun, an analyst at the Asan Institute of Policy Studies, and will view “every meeting as a viable political opportunity” towards that goal.

But whether Pyongyang is willing to offer something concrete in return has yet to be seen.

Moon may try to convince the North Korean leader to verbally commit to providing a list of the country’s existing nuclear programme, said Shin Beom-cheol, another analyst at the Asan Institute.

“It won’t be South Korea that inspects and verifies so if we can get something out of Kim Jong Un’s mouth, that will be significant,” Shin said, adding the next step could be a summit between Kim and Trump sometime in October.

Despite the deadlock in denuclearisation talks, since the Panmunjom summit the two Koreas have sought to pursue joint projects in multiple fields.

But North Korea is under several different sets of sanctions for its nuclear and missile programmes, hampering efforts to revive cross-border economic schemes.

The dovish South Korean president has invited the heads of the country’s largest conglomerates — including Samsung Electronics and Hyundai Motors — to accompany him to Pyongyang.

“He is sending a message to the North to speedily complete denuclearisation, conclude talks with the US so that South Korea can begin full-fledged economic cooperation,” said analyst Go.

And special advisor Moon Chung-in added that the South Korean president could look to convince Kim to come up with a “somewhat radical and bold initiative”, such as dismantling some nuclear bombs, and press the US for reciprocal measures. “And the United States should be willing to come up with major economic easing of economic sanctions,” he said.