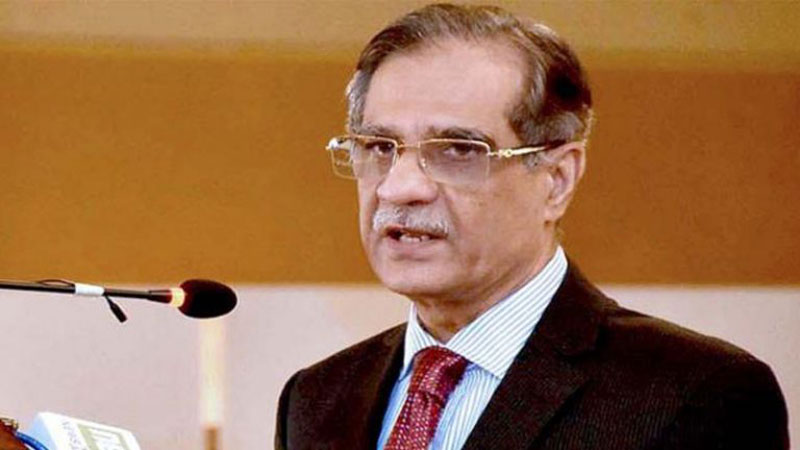 Chief Justice Mian Saqib Nisar on Saturday warned that any person who attempts to hinder the construction of new dams in country will be tried under Article 6 of the constitution, a private TV channel reported.

“I have recently studied Article 6 of the constitution and carefully checked the constitutional clause to determine its parameters … anyone who attempts to block the construction of new dams in the country will be tried under it,” the chief justice said while hearing a suo motu case regarding mineral water companies using underground water for selling it in bottles, here at the Supreme Court’s Lahore registry.

“I tell you one thing: I have no other objective than to serve the nation,” the chief justice said, adding that he would continue to work for the welfare of the people even after retirement. “If it weren’t for this country, I probably would have been Aitzaz Ahsan’s munshi (secretary) today,” he said, referring to the senior lawyer who was representing Nestle in the case. The chief justice emphasised the value of water by saying that it was now even more precious than gold. Summoning the chief executives of mineral water companies in Pakistan, the chief justice said the companies must set prices after consulting the government. “Water theft of any kind will not be tolerated,” he warned. “These companies buy water at Rs 0.25 per litre from the government and sell it at Rs 50 per litre. The poor are forced to drink unhygienic and contaminated water,” he added.

Meanwhile, addressing a ceremony, Chief Justice Mian Saqib Nisar said construction of Kalabagh Dam could be a genuine guarantor of Pakistan’s survival. “After Diamer-Bhasha and Mohmand dams, we will build Kalabagh Dam as well, if the nation stayed united,” he said, adding that the plan to construct Kalabagh Dam has not been abandoned. “In fact, experts opined that its construction is not possible immediately,” he added.

The chief justice resolved to run the fundraising campaign for dams like a movement. “Initially, I had no idea this initiative will turn into a movement. Even little children are donating for the cause. The army chief gave me a huge donation of more than one billion rupees,” he said. “A group of transgender persons donated Rs 0.1 million for the dam fund and I would like to add Rs 0.1 million as an encouragement for them, so it will make 0.2 million donation on their behalf,” he added. The chief justice said he came across the issue of scarcity of potable water in Quetta some five months back. “The impending drought can have gravely perilous consequences for the country and there’s only one solution to cope with this situation that we buiald more dams,” he said. “Scores of people will have to migrate from Quetta if the issue of water scarcity persists,” he added.