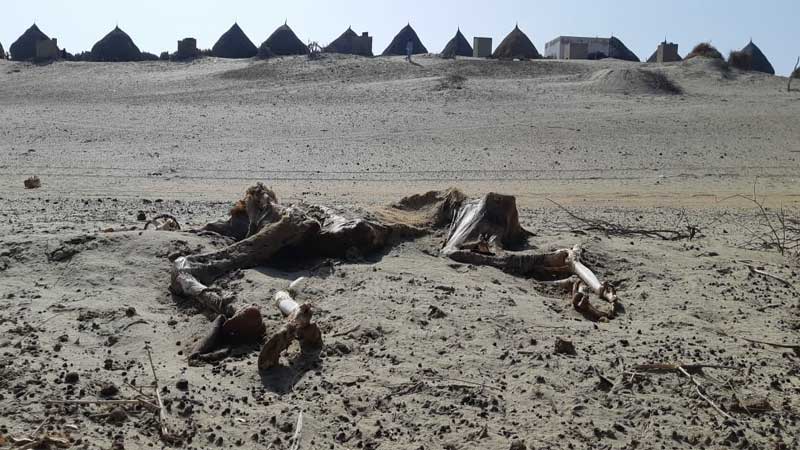 Sindh’s Achro Thar Desert is currently facing its third drought in the past four years and the famine like situation has led to a mass migration to barrage areas.

In the absence of monsoon rains, the desert is facing a fresh drought which has led to deaths of livestock and shortage of fodder in the area.

Sindh Chief Minister Murad Ali Shah, while taking notice of the situation, has directed Senior Member Board of Revenue (SMBR) Iqbal Durrani to seek information about drought in Achro Thar to spur the relief efforts.

District Sanghar’s Deputy Commissioner Liaquat Ali Bhatti wrote a letter urging the Relief Commissioner to declare Achro Thar a ‘drought hit area’ on August 21. In the letter, the relief commissioner was also requested to initiate required relief efforts in the region including the establishment of relief and medical camps in the drought hit terrain. The authorities were also approached for provision of fodder and establishment of veterinary camps for livestock.

According to Met Department, during this monsoon there were two spells, 5 millimeters (mm) each, of sporadic showers in very small areas of the Achro Thar. According to a tradition being followed since British Raj, this region is declared ‘drought hit’ if monsoon rains are not above 100 mms before August 15.

The natives of the region are heavily dependent on livestock as a means of sustenance primarily because a vast region of Achro Thar is infertile. The residents of the area are facing increasing difficulty in the absence of fodder for livestock. There also is an outbreak of Enterotoxemia disease, a livestock diarrhea, condition caused by a deficiency of nutrition. So far, the outbreak has killed more than 2000 goats in the region.

Locals of the area told Daily Times that no efforts have been made by relevant government agencies including Provincial Disaster Management Authority (PDMA) and Animal Husbandry Department, to tackle the disastrous situation.

Directorate of Animal Husbandry that deals with routinely livestock vaccination and comes in action in case of any outbreak is dysfunctional has been dysfunctional in Achro Thar area for the last three years. There are two animal health extension centers in the area located in Tarr Tiplore in UC Bilawal and Tarr Jafrao in UC Kamil Hingoro but both remain closed. There has also been no visible use of budget fixed for animal treatment for Achro Thar Desert.

Locals of the region demanded early vaccination of livestock to prevent further losses since they cannot afford private vaccination. People residing in Achro Thar, need to travel for around 150 kilometers (kms) to barrage areas like Khipro or Khahi to get their livestock vaccinated

Khan Muhammad, a middle aged man from Kalro village in UC Raanak Dahar, who got his cattle vaccinated on his expense told Daily Times that one round of vaccination costed Rs20,000 to Rs30,000 and it took three rounds to complete one course of vaccination. “People of Achro Thar need livestock vaccination more than anything else,” he said.

Locals have started migrating to neighboring barrage areas due to a scarcity of fodder for their livestock. A majority of the residents have moved to Nara Canal barrage areas while some people moved to the small pockets of Achro Thar that received rainfall this monsoon season.

UC Kamil Hingoro’s Chairman Ali Khan Arisar told Daily Times that the situation was critical in UC Kamil Hingoro, UC Baanko Chaniho and UC Ranak Dahar. He said that because of no rains, ground water had become brackish and water level had also decreased. “Due to this situation about 50 percent of the area’s residents migrated to barrage areas along with their cattle,” said Arisar.

Village Kalro is among the areas which received showers during ongoing monsoon and that diverted locals migrants, like Sukho, towards the area. Fifty years old Sukho resides in Jafrao village, 16 km away from the Kalro. He told Daily Times that 30 families had migrated from Kalro because there was no grass left on grazing grounds. “We may migrate to another place in coming days if grass cover decreases in this area as well,” he added.

Locals complained that in past the area had been under reported. According to the residents of Achro Thar, hardly any mainstream media reported the droughts which had became increasingly frequent in the past years. The locals also showed concerns over health of malnourished children and demanded the establishment of life saving medical camps. They also demanded Mid-Upper Arm Circumference (MUAC), a simple screening performed for detection of children under five with malnutrition. In past United Nations Children’s Fund (UNICEF) did such tests in the area but now it has closed its operations.

In March this year, Pakistan Peoples Party (PPP) Chairperson Bilawal Bhutto Zardari inaugurated a drinking water scheme for the first ever time in Achro Thar’s history. Under the Benazir Bhutto Fresh Water project completed by Sindh government, 240 kilometers main pipeline and enroute lines had been laid from Nara Canal to ensure water supply to the 85 villages dotting the dry desert.

The scheme has become beneficial for drinking purposes. Traditionally the locals along used to fetch drinking water from wells located at long distances from their homes. These wells carried contaminated water 80 feet to 200 feet (ft) deep.

However, more than half of the settlements are still out of water supply. Provision of water through pipeline can reduce the drought effects but it cannot eliminate the effects completely. Drinking water cannot be used for cultivation, especially for growing grass.

The government can support locals through drip irrigation projects. Kitchen based drip irrigation can help locals in growing cultivation vegetable that will be beneficial for nutrition. Research and Development Foundation (RDF), a non-governmental organization, introduced such projects in seven villages of UC Kamil Hingoro. “Technically the project remained successful as people have cultivated some vegetables but it needs locals ownership to be fully executed,” Zahoor Palejo, spokesperson RDF told Daily Times

For local social workers like Khuman Singh, the short term solution to this worsening crisis is the provision of subsidized fodder at people’s doorsteps. “Vaccination should be done at earliest. Wheat supply is also vital to avoid malnutrition. These efforts can stop the migration as well as save their livelihood,” he told Daily Times.

“With the consensus of local people government can select and preserve the areas for forestation and grazing grounds so that these areas can be used in drought days,” said Singh. “Also, desert national park could be established which can preserve the ecosystem of the Desert as well indigenous tree species can be grown. That will also attract tourists,” Singh added.

Singh said that while livestock was the only form of income in the region, people could be directed towards alternative jobs “People can also be diverted to other sources of income. Also, an irrigation system could be introduced as a long term solution. For example tube wells can be installed so that people can start cultivation,” Singh suggested before adding that handicrafts centres could also be built in the area.