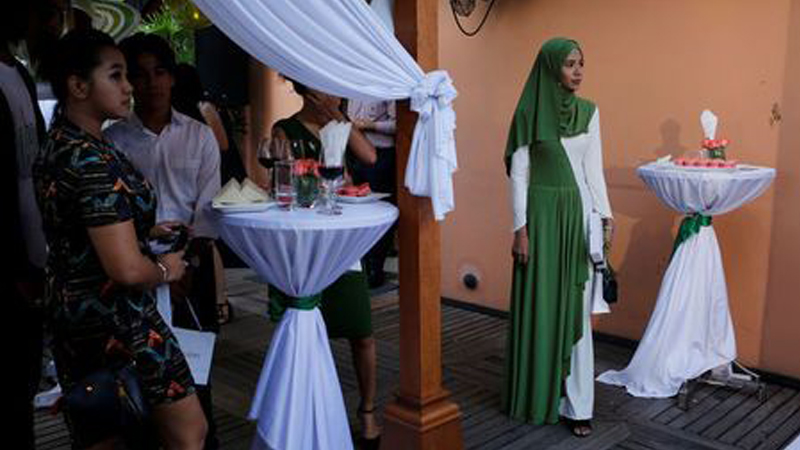 Muslims in Buddhist-majority Myanmar usually keep a low profile for fear of intimidation, but Win Lae Phyu Sin, one of the community’s rare bloggers on beauty care, has gone the other way.

The 19-year-old was the center of attraction at a recent launch of beauty products in Yangon, her striking multi-colored make-up offset by a long-sleeved green-and-white gown and matching hijab, a headscarf worn by some Muslim women.

“I don’t regret my decision to wear the hijab,” the blogger said. “Our God opens many ways for me. Hijab is like a key for me. I can use it to go where I want to go, and do what I want.”

Muslims, who make up about 5 percent of the nation of around 50 million, say they have not been able to open new mosques in decades and struggle to rent apartments from Buddhist landlords.

Systematic persecution of Muslims is growing in Myanmar, rights groups say, though world attention has focused on its stateless Rohingya Muslims, with the United Nations and aid groups saying more than 700,000 were driven into neighboring Bangladesh after an army crackdown last year.

But many Muslims of all ethnicities had been refused national identity documents, and denied access to some places of worship, Burma Human Rights Network said in a report last year.

For some of Win Lae Phyu Sin’s students, her tutorials are not merely about applying eyeshadow and highlighter, but also about building confidence and pride in an identity constantly questioned by Buddhist fellow citizens.

“I wanted to be as beautiful as her.”

She has 6,000 followers on social media site Facebook and 600 students have attended more than 150 classes on the use of cosmetics run in a makeshift studio.

But her high profile has drawn criticism and even discrimination: a Buddhist woman who enrolled in her class backed out on discovering Win Lae Phyu Sin was Muslim.

Some Facebook commenters have attacked her for being too flamboyant and using make-up, which conservative Muslims regard as taboo, but the blogger refuses to let critics waste her time.

“When people attack or criticize me outside and online, I choose to ignore them,” she said. “I have a lot of work to do.”

Her growing fame, fed by dozens of online make-up tutorials and events at shopping malls, has prompted trips to Myanmar’s second largest city, Mandalay, and she plans to visit Kuala Lumpur, the capital of neighboring Malaysia.

Win Lae Phyu Sin started with tutorials on make-up filmed in a bedroom shared with her sister, posting them on Facebook before offering classes.

“After I graduated from high school, my boyfriend gave me make-up palettes as a present,” she said. “I didn’t know how to use them so I Googled it and learned.”