'Over the years, the descendants and sajjadanashins of Sufi shrines have been dominating in local and regional political landscape of Punjab' 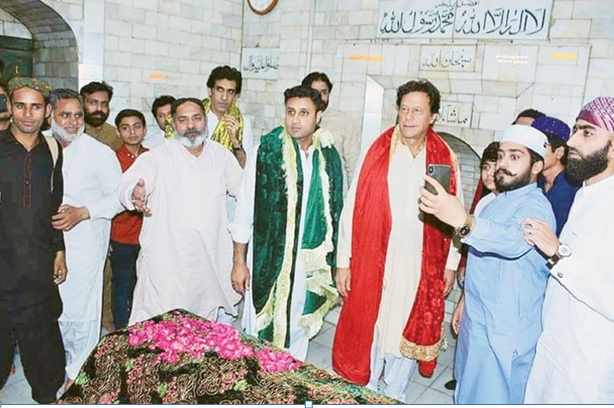 A month ago Pakistan Takreek-I-Insaf Chairman Imran Khan visited  Bbaba Fariduddin Ganj Shankar’s shrine in Pakpatan  to pay homage to the great saint.His wife accompanied him as well.  The video showing Imran Khan bowing infront of the door  went viral on social media . The PTI chief responded that  it was not sajda rather it was my respect for the  great saint Baba Fariduddin.

Given the historical influence of shrines, PTI chief’s gesture of ‘adab’ is no surprise for the followers of PTI. PTI chief also visited the Dargah Sial Sharif and addressed a gathering with Pir of Golra Sharif. Recently aired PTI TV ads ‘Allah per eman, balay per nishan’ also suggests that the PTI is vying for  votes for what  it uses all the means it can. I discuss what are the antecedents of PTI Chief chooses to seek support from spiritual leaders and pirs to attract religious vote bank.

Since the inception of  Pakistan and majority of Pakistanis have remained under the influence of pir or murshids. Historically , Moulana Shabbir Ahmed Usmani and Maulana Abdul Sattar Niazi also played an active and exciting role in the Pakistan movement. As documented by Arshad Sami Khan in ‘Three Presidents and Aides’   that the former presidents General Ayub Khan and General Yahya Khan as well as Zulifqar Ali Bhutto had also close association with pirs to sustain their rule. Politics-shrine nexus is important in the perspective of Pakistan. When ‘gaddi nashin—guardians’  throw their weight behind a particular political entity, the legitimacy of their spiritual lineage and shrine brotherhood is effectively made functional to assist the one they choose to support. If you ask any murid reason for casting his vote to the ‘pir’ or to an affiliated candidate, his response would rather be indifferent to suggest this is a matter of ‘adab’ more than a matter of choice.

However, a qualitative mapping  has identified 64 shrines with a direct political connection. To a conservative estimate at least 42 Tehsils in Punjab has least one politically influential shrine. Multan, Khairpur Tamewali, Chishtian, and Okara are prominent because of the highest number of shrine families in politics.Moreover, a significant proportion of politically influential shrines are situated in other regions of the country that directly influence the elections.

PTI chief is not the only one to bow, the British rulers had to depend on shrine ‘notables’ now labeled as ‘electable’  as well for support in order to consolidate their control. Shrine affiliated families were also an important part of 1857 uprising against the East India Company. ‘fatawa’—(legitimate order seen as independent non-binding legal opinions of religious scholars) then was most crucial and effective tool could only be used by ‘pirs’ to persuade and instigate believers rising against the British. While, ‘arms and aminations support extended by other resourceful’ to quell the uprising. Notwithstanding, the difference of time and space now and then; conditions unique to the context of subcontinent remain the same so do the ways to adapt to these conditions.

During partition time, families connected to shrines families aligned themselves with the secular alliance of Punjab’s landed aristocracy. Later they decided to get along with the Muslim League and some of them became front-runners of the Pakistan movement. Since 1947 the ‘pirs’ find it conveniently feasible  to adjust to political flavours of the changing  time.

A quick overview is offered just to let you why I see the ‘pirs’  still relevant—they will be(perhaps).  I start with the example of those linked to Pakistan Tehreek-I-Insaaf,Firstly,  Qureshis of Multan who have sided with nearly every political dispensation since the Moguls.  Although the family’s status was recognized by Maharaja Ranjeet Singh, it provided covert support to the British in late Sikh period. In the 1857 uprising, the family, under the leadership of Makhdum Shah Mahmood, openly supported the British in crushing the rebellion. Since then, the descendants of Qureshi family have been affiliated with around ten political parties, supporting the military regimes of Ayub Khan and Zia-ul-Haq along the way.

The Chishtis of Pakpattan Sharif have followed a similarly volatile path. Dewan Qutbuddin, the elder sajjada nasheen, was the chief divisional organizer of Republican Party and a member of Ayub Khan’s Convention League. Although initially opposed to Zulfiqar Ali Bhutto’s PPP, he later joined the party in the 1970s, only to desert it after the imposition of Martial Law in 1979. Acquainted by direct engagement with the instruments and ideology of modernity, these shaykhs appropriated and critiqued the language of science, nationalism and secularization. As teachers, writers and political activists, they defended the orthodoxy of Sufi thought and praxis, and championed a reconstructed Pakistani cultural identity that was simultaneously Muslim, mystic and modern. Pakpattan district has three constituencies of National Assembly and five constituencies of provincial assembly. All the pirs of the district have their murids in different constituencies

Today, this legacy is perpetuated by a new generation of Chishti Sabiri disciples (murids) in Pakistan and, more recently, Malaysia. From Karachi to Kuala Lumpur, these contemporary Sufis preserve a distinct Muslim identity. That identity is rooted in spiritual genealogy, is inscribed in texts, is communicated in the intimate exchange that identity between master and disciple, and above all is performed in embodied ritual practices. Connected to a sacralised past, these contemporary murids are fully grounded in the living present. They respond to major shifts in the social, ideological and technological landscape with practical strategies designed to adapt Sufi teachings and practices to the contingencies and complexities of twenty-first century life. In both piety and politics, contemporary Chishti Sabiri adepts demonstrate an alternative modernity. Political connection with shrine gentry becomes a valuable social and political capital, remain available to exploit beyond elections. While pirs affiliated parties use social capital to attain legitimacy with electoral advantage, political parties also derive economic benefits by inducting pirs in their ranks.

In Rahimyar Khan, Makhdooms have been associated with virtually every major political dispensation. Their family members have remained part of the Muslim League, Republican Party, Conventional League, and Council Muslim League. Makhdum Hameed-ud-din ran elections on the People’s Party ticket in 1977 but left the party after General Ziaul-Haq’s Martial Law. Thereafter, the family has won elections on different party platforms. Results for the 2013 general elections in NA-194 (now in GE 2018 NA-177 Rahim Yar Khan-III), a constituency in district Rahimyar Khan, illuminates this by showing that all top four candidates in this constituency hailed from prominent shrine families. The winner, Makhdum Khusro Bakhtiar, ran as an independent candidate. From the ‘pırs’ standpoint, such independent political power is emblematic of a sovereign and undiluted space where every political party left with little choice but to work through established shrine guards or gadinaheens, 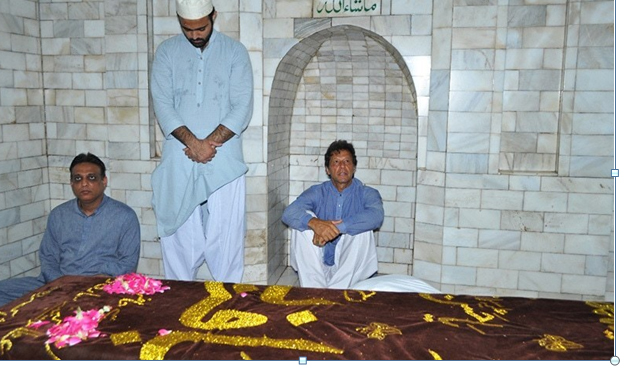 What explains these shifting political alliances? For many pirs, a permanent foothold in the corridors of power is an essential means for survival. Their significance has been recognized by military rulers, for whom shrine guardians, with their powerful spiritual and material networks, are perfect allies. The bargain is mutually advantageous.

Stability of the religious network depends both on spiritual intercession and exchange of political goods—a routine feature of patronage politics in South Asia. Voters need constant mediation in accessing public services through the local state apparatus represented by the police (thana) and courts (kutchery).

Through such strategic and pre-emptive affiliations with rising parties, traditional elites preserve their hold as political gatekeepers, without whose support parties are systematically constrained in extending their reach to rural areas. From the perspective of shrine elites, such monopoly of access must be guarded at all costs, including the costs associated with changing political loyalties.

Over the years, the descendants and sajjadanashins of Sufi shrines have been dominating in local and regional political landscape of Punjab. Besides the religious legitimacy, which is the main source of political power, there are some other socio-political factors in Pakpattan District that help shrines to politically dominate. These factors include poverty, biradari system, feudalism, ‘deraydari’ system, prevalent of spiritual myths, political economy, political ideology and government patronage. These are the most significant factors of shrine-politics nexus.

Interestingly, both ‘pirs’ and their subjects (murid/ non-murid) actively manipulate such situational factors. In other words, besides religious salvation and spiritual solace, the murids and non-murids have some socio-economic and political interests. The pirs, on the other hand, take care of such interests to maintain their status. 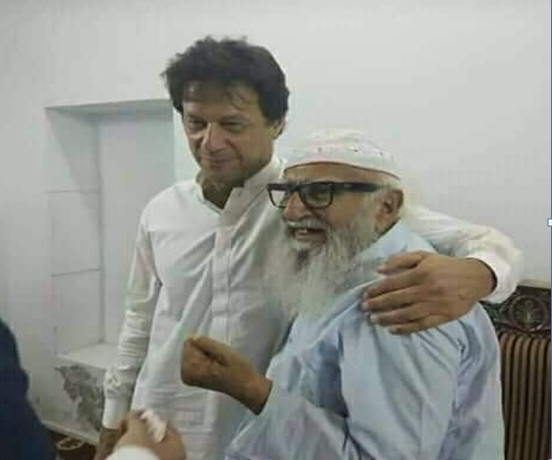 The PTI  can be interpreted as a pre-emptive strategic party  to regulate the political inroads of a growingly popular and urbanized middle-class constituency. Since his entry into PTI, Shah Mahmood Qureshi has quickly rose to prominence as the party’s senior vice president with the ability to influence major party decisions relating, for example, to the nomination of party candidates in elections, political alignments, and party manifestos. While, surrounded by ‘pirs’, PTI chief can get endorsement by powerful and influential pirs in the eletion 2018 that , perhaps , lead him to the power corridor. 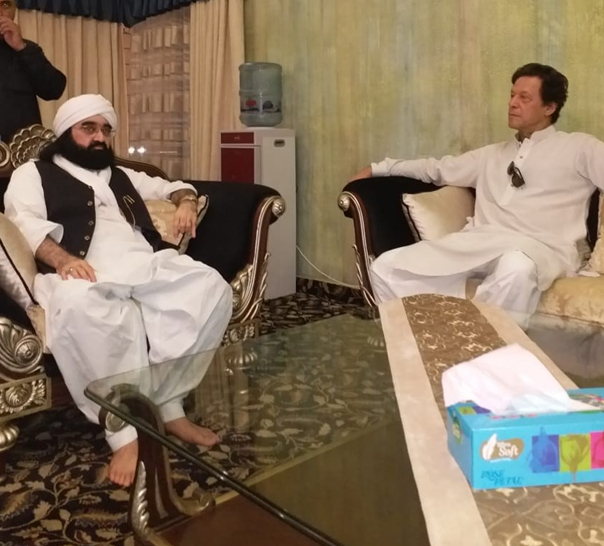