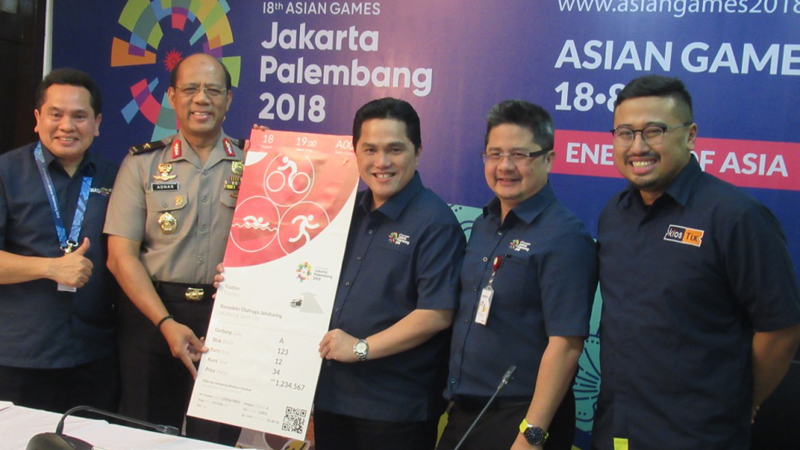 LAHORE: The organising committee of the 18th Asian Games in Indonesia this summer, INASGOC, has teamed up with an experienced ticketing company in a bid to sell over 1 million tickets. The move is viewed as a revolutionary step in Indonesian sport, as event organisers are usually responsible for ticket sales and there is no chance for the public to buy tickets in advance. “This is the first time that the organisers of an international sports event in Indonesia have partnered with an Indonesian ticket company,” said the President of INASGOC, Mr Erick Thohir, at a joint press conference in Jakarta on Monday.

With the help of KiosTix, which usually provides tickets for music concerts and exhibitions, Asian Games organisers are aiming to sell 1.3 million tickets for the event, which will run from August 18 to September 2 in Jakarta and Palembang and feature 40 sports, 67 disciplines and 463 events. Mr Thohir did not provide a figure for the total number of tickets, but said more than 1.3 million could be made available if early sales were strong. The public can start buying tickets from the end of June. The cheapest ticket for a sports session will be 30,000 Rupiah ($2) and the average price will be 100,000 Rupiah ($7). Tickets for the opening ceremony on August 18, closing ceremony on September 2 and the quarter-finals, semi-finals and finals of the popular team sports such as football, volleyball and basketball will be higher, but no price has been decided.

The partnership with KiosTix, which was represented at the press conference by Chief Executive Officer Ade Sulistioputra, will also involve revenue sharing from ticket sales. The main target for sales will be students, and tickets will be available to buy in partner banks, supermarkets, Asian Games pop-up stores in shopping malls and travel agents. KiosTix, which has experience of selling 2 million tickets at 100 venues and 300 events, will also provide an online sales service for international customers. “We are making the Asian Games accessible to everyone in Indonesia with the pricing policy, and this partnership with KiosTix will help the public buy tickets in advance. This is the first time this has happened in Indonesia for an international sports event,” said Mr Thohir.