Religious diversity: a lost cause?

Dr Abdus Salam should be the pride of his country. Instead he is labelled as an insult to it 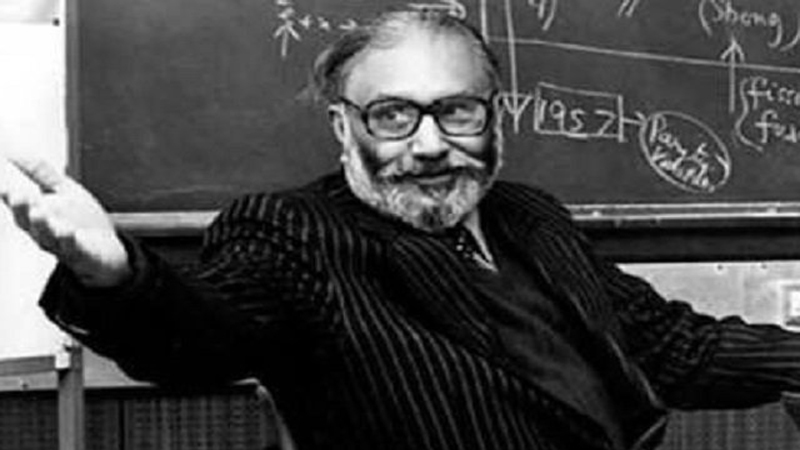 Recently, the news of the renaming of Professor Abdus Salam Centre for Physics at Quaid-i-Azam University as Abu al-Fath Abd-al-Rahman Mansur al-Khazini Department for Physics took the internet by storm. However, later in an official statement, the university’s senior dean Dr Wiqar Ali Shah came forward and explained how the Centre for Physics and the Department of Physics are, technically speaking, two separate entities. Dr Shah further stated that “The Centre is an autonomous body affiliated with QAU, while the Department of Physics is part of QAU”.

And hence, it was clarified by the university that the resolution passed by the National Assembly actually demanded the Department of Physics be renamed and not it’s Centre. Previously, QAU Centre for Physics, which was named after the country’s theoretical physicist and Nobel Laureate Dr Abdus Salam, has been a subject of constant protest campaigns that were led by Capt Safdar, who is also Nawaz Sharif’s son-in-law, known for his anti-Ahmadia stance and has previously gone on record to criticise the decision to rename QAU’s Physics Centre after Dr Salam during Sharif’s government on the grounds that the scientist followed the Ahmadi faith.

Both in Safdar’s reckoning and in the traditional archetype of a true Pakistani, Salam for all of his triumphs is to be considered a murky and unrealised figure that is forever under indictment. Many argue that Safdar is not a man of ideology and by making these claims is trying to deflect attention from the numerous political crises that afflict both him and his party. However, this reasoning is perhaps even a much worse kind of evasiveness; where one overlooks the current normative nature of Ahmadi-hatred in the nation and the extent to which it has infected our public life.

When we review our history, we see how Pakistan has witnessed an unprecedented surge in Islamic extremism and religious fanaticism over the last past decade. Islamist groups, including the Taliban, have repeatedly been targeting religious minorities in the country to impose their strict Shariah, or Islamic law, on people. Baseer Naveed, a human rights activist, stated how Ahmadis continue to be persecuted and attacked in Pakistan with the full backing of the state. “The government wants to appease Muslim fundamentalists and right-wing parties. We see that the Pakistani state continues with its policy of hatred towards religious minorities, which embolden fundamentalists.”

The need to maintain the supremacy of the idea of an Islamic Pakistan contributes to a very deleterious view of Ahmadis and the sanctity of their existence. This conflict shapes every single event of their public life. The good Pakistani and the good Muslim is increasingly one who is defined by their hatred of Ahmadis while the only acceptable Ahmadi is one who passively submits to this troubling pathology. It is within this theatre of resentment that the heroes of today can be found to stake their claim for glory. And hence, there is an explicit recognition that having deemed as a community of people that is so unworthy of the country in which they live, the national cause is well served by striking out against them.

What is more painful is the fact that this was certainly not the vision that our founder Quaid-e-Azam Muhammad Ali Jinnah stood for. He envisioned the creation of Pakistan as a secular state and made it obvious in his address to the Constituent Assembly of Pakistan on 11 August 1947 when he openly declared, “You are free; you are free to go to your mosques or any other place of worship in this state of Pakistan. You may belong to any religion or caste or creed — that has nothing to do with the business of the state.”

Notwithstanding, one of the most dismaying aspects of the erasure of Ahmadis is how many remarkable people have been lost and eventually disregarded by the community at large. Safdar seems to put forward his claim that Ahmadis are enemies of the nation, but in doing so, he actually rides roughshod over many of the founding truths of Pakistani history. Unlike the radical religious forces which now masquerade as the defenders of the nation and yet were at the forefront of opposition to it during the independence years, Ahmadis, in fact, supported the Muslim League throughout this struggle. When Mr Jinnah retreated to London frustrated by the Indian political scene, it was a little known Ahmadi missionary, Abdur Raheem Dard, who persuaded him to return to his homeland and fight for the Muslim cause. The first Foreign Minister of the country Chaudhry Zafarullah Khan, a man described by Muhammad Ali Jinnah as a son to him, became famously known for drafting the 1940 Lahore Resolution and was also the chief Muslim league representative in the Boundary Commission. Unfortunately, such are considered as enemies of Pakistan and such are its heroes.

Then there is Dr Salam again. A figure, which more than any other ought to transcend the visceral and crippling ideals that sit at the very core of the national imagination. Infact, it was under his guidance and influence that research in physics was able to reach its maximum point throughout the nation by prompting the worldwide recognition of Pakistani physicists by sending more than 500 scientists abroad.

In his must-read ‘Abdus Salam-Past and Present’, which was published in 1996, Pervez Hoodboy makes some very interesting yet startling revelations for a nation that mistreated its best and brightest. An inspiring description taken from the extract stated, “How Salam has quietly been supporting the needy science students throughout Pakistan with his Nobel Prize money. The money has also been used to purchase scientific equipment for half a dozen Pakistani colleges, and to support an annually awarded prize for scientific research.”

He should be the pride of his country but is instead being labelled as an insult to it. Beyond his scientific achievements, Salam’s life represents a triumph of will over the grim permanence of oppression. Despite being excommunicated by his own nation over state discrimination and an inflexible social attitude, he remained loyal towards Pakistan. He even wore Pakistan’s national dress — the Shalwar Kameez — while accepting his Nobel Laureate. He didn’t take citizenship from any other country and kept his Pakistani nationality till his last breath.

And whether we accept it or not, this is the sad reality of how heroes are made in Pakistan: by breeding contempt. A contempt for history; contempt for plurality; and contempt for the inviolability of individual freedoms. Though neither Bhutto nor Zia were able to fulfil their grandest of ambitions, they inadvertently or by intent bequeathed to Pakistan a grotesque and improbable vision of self-realisation which spurred the nation to redefine itself around the permanent pursuit of bigotry. And hence, the message is very loud and clear to us that in our so-called secular state, it is very appealing and easy to forgive murderers and terrorists than it is to respect the right to religious diversity.

The writer is currently practicing as an Associate Lawyer at Legal Liaison, (Advocates-Advisors — Consultants). Newly established law firm based in Lahore. I have graduated with and LLB Hons from the University of London International Programmes. Interests include writing and debate. Twitter: https://twitter.com/fizzaalik