Achievement of 5.79 percent real GDP growth was attributed to a number of factors including a stable macroeconomic environment due to improvement in supply of electricity to the industrial sector

The current fiscal year marked the continued improvement in economic growth, as the GDP is estimated to have grown by 5.79 percent, highest in the last thirteen years. Although this is short of the planned GDP growth of 6 percent, there has been steady upward trend from around 5.3 percent growth achieved in 2016-2017.

This fastest pace of real GDP growth is backed by the robust growth in agriculture, manufacturing as well as in services. The growth across different sectors of the economy is appealing to various international companies, as they see immense potential, a huge consumer market, strategic location and macroeconomic stable environment. Moreover, the previous years mark the trend of foreign investment inflows into Pakistan.

Moreover, in line with the trend from last five years, services sector has demonstrated a growth of 6.4 percent and remained the key contributor of GDP growth. This growth was majorly supported by the non-commodity producing sectors including wholesale and retail trade. The industrial and agricultural sectors also reflected healthy growth of 5.8 percent and 3.8 percent respectively. Agriculture sector surpassed its targeted growth of 3.5 percent and also last year’s growth of 2.07 percent.

Level of private consumption and investments largely contributed to the enhancement in the GDP growth. This year, household’s average tendency to consume continued at around same level of 85.5 percent at constant prices and at around 82 percent in current prices. It reveals that the growth rate of private consumption was about the same as the growth rate of GDP both in constant and in current price. Low interest rates also supplement the consumption level as people are interested in purchasing durables during periods when relatively cheap money is available.

Achievement of 5.79 percent real GDP growth was attributed to a number of factors ranging from stable macroeconomic environment due to improvement in supply of electricity to the industrial sector. Key drivers of GDP growth include control over inflation with lowest policy rate, credit flows to private sector via strengthening of banking sector, continued buoyancy in external trade, mainly imports, surge due to CPEC projects, improvement in electricity supply to industrial sector, higher large scale manufacturing growth, enhanced revenue collections and infrastructure progress including CPEC and its related projects is of utmost importance.

The government’s objective of containing inflation in single digits was fulfilled as per the Economic Review with inflation during July 2017 to March 2018 standing at 3.78 percent, which is lower in comparison to 4.01 percent in the same period last year. Although the Federal Minister admitted that the government could not claim to have transformed Pakistan like China, it was claimed that without any doubt it had turned around an economy described by many as dead five years ago. However, the social indicators, although not officially released, do not seem to be improving as per last available statistics. 30 percent Pakistanis live below poverty line of Rs 3030 per adult per month in 2013, 2 out of every 5 (44 percent) children under the age of five are stunted, 32 percent are underweight and 15 percent children are suffering from acute malnutrition. Approximate allocation for the first three years to education comes at about 2.6 percent of GDP.

Besides this, to the government’s credit, a number of developments in their tenure have fueled the growth impetus in the country. Some of the most prominent are addition of 12,230 MW of electricity to the national grid against an addition of 15,000 MW in the past 66 years, activation of $29 billion worth of projects under the $46 billion CPEC portfolio, and improvement in law and order situation of the country in general and of Karachi, the business capital of Pakistan, in particular.

Total public debt provisionally stood at Rs 23,608 billion at the end of February 2018 while total debt of the government was Rs 21,552 billion. Gross domestic debt recorded an increase of Rs 1093 billion during first eight months of the current fiscal year while external debt increased by Rs 1107 billion. In addition to financing of the fiscal deficit, increase of credit balance with banks and depreciation of currency contributed towards the increase in debt. The government has justified this increase through utilisation for capacity additions in energy sectors and infrastructure development.

Regardless of the significant growth shown by numbers, there is growing skepticism on the sustainability of this growth momentum owing to continuing bulge in the current account deficit and falling foreign exchange reserves. Pakistan’s exports have shown negative growth in the last four years, and have only witnessed some growth in the current year whereas rising imports of capital equipment and fuel kept the import bill high. Imposition of additional regulatory duty has done little to slow down the imports.

The current estimate of Current Account Deficit of 5 percent of GDP is expected to increase till the year-end as it currently does not take into account the circular debt which has crossed Rs 1 trillion.

The recent devaluation has not helped much in stabilising the foreign exchange reserves and the rising Current Account Deficit may lead to the situation of approaching IMF once again, a position which the government had assured would not reach in January this year. Should that happen, Pakistan will continue the tradition of being the only country of its size to have repeatedly approached IMF at a slow-down of economy after going through an artificial boost fueled by the previous round of funding with no sustainable improvement in the economy.

With an aggregate total outlay of PKR 5.93 trillion and no new taxes, the budget targets an economic growth of 6.2 percent by 2018-19 to be attained by raising net revenue receipts by 16 percent (PKR 3.2 Trillion) and attracting higher investments both from public and private sectors.

The budget aims to reduce the fiscal deficit to 4.9 percent, increase revenue and investment to GDP ratios, address the energy deficit and promote exports. Given the right economic policies and their effective implementation, the targeted growth appears challenging but achievable. FBR revenues are planned to be increase to Rs 4435 billion and increase federal revenue to Rs 5661 billion while non-tax receipts to be decreased by 21 percent this year as compared to FY18 budget. 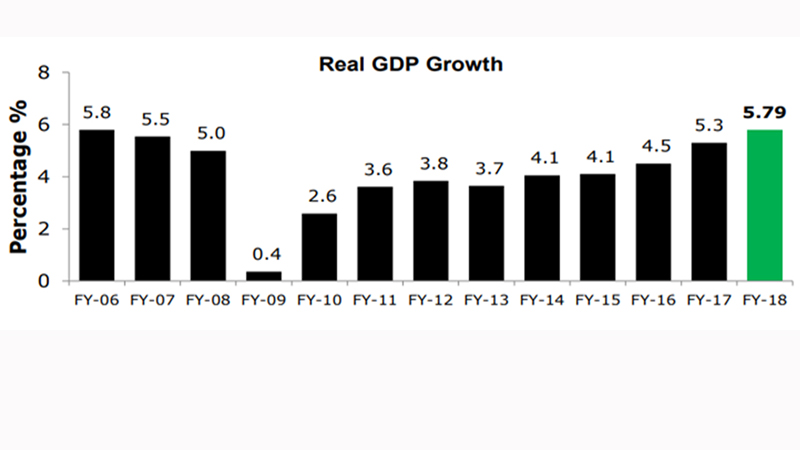 Funding for higher education, primary health services, and programmes for youth with Rs 57 billion under Public Sector Development Programme allocations to Higher Education Commission, Rs 37 billion for primary health programmes and Rs 10 billion for programmes for youth, for railways, in addition to recurrent budget grant of Rs 35 billion, development budget investment is proposed at Rs 39 billion, 31 projects for development of Gwadar are part of the proposed PSDP 2018-19 with an estimated cost of Rs 137 billion, for the AJK and Gilgit Baltistan, an amount of Rs 44.7 billion is proposed to be allocated. For the people of AJK, a special project of Lipa Tunnel construction which will facilitate the local population was also announced; for FATA, Rs 24.5 billion have been proposed to bring FATA to the mainstream, a ten-year FATA development plan with total outlay of Rs 100 billion has been approved during 2018-19; Rs 10 billion are proposed to be provided and Rs 90 billion have been allocated for peace and security in the budget 2018-19’ the defence budget is proposed to be Rs 1100 billion against the revised budget of Rs 999 billion in 2017-18, total size of Federal PSDP 2018-19 would be Rs 1030 billion against revised estimates of Rs 750 billion and provincial surplus is estimated at Rs 286 billion in 2018-19 against revised estimate of Rs 274 billion for 2017-18.

On the other hand, it also shatters the myth that Pakistan spends its major chunk of expenditures on defence as in reality the largest expenditure item is debt-servicing. It is the second largest expenditure, deliberately hidden in budget figures, which was actually eaten up by the losses of enterprises like PIA, the Pakistan Steel Mills and Railway. In budget 2018-19, the major expenditure is on debt-servicing followed by losses of public sector enterprises, public sector development programme and then comes the turn of defence affairs and services. Therefore, the perception that the defence budget takes away lion’s share of the total budgetary outlay is indeed not the reality as 82 percent are all government expenditures and 18 percent are spent on defence affairs and services. Moreover, Pakistan armed forces are the 6th largest in the world, but our expenses per solider are the lowest. US budget allocation amounts on average $460,000 per solider in one fiscal year in comparison to Pakistan which only allocates $12,000. Besides this, there is another myth that the defence budget has been increasing at a high rate whereas in reality it contributes to 4.6 percent of GDP in year 2001-02, 3.9 percent of GDP in year 2003-04 and Rs 1.1 trillion which accounts to 3.2 percent of GDP in the budget 2018-19. In addition, Pakistan’s defence budget is the lowest in the region despite its location in the red zone in terms of growing threats to its security. In order to make a comparative analysis, United States is spending $622 billion, China is spending $191 billion, India spending $50 billion and $9.6 billion is spent by Pakistan.

To conclude, according to the World Bank Global Economic Prospects published in January 2018, other countries in the region, especially India and Bangladesh are forecasted to grow by 7.5 percent and 6.7 percent in FY19 respectively. Pakistan should be aiming at a GDP growth of plus 7 percent, especially considering the huge opportunity created by CPEC investments and continuing improvements in law & order and energy sectors.