‘Exit West’ – the doors will take us 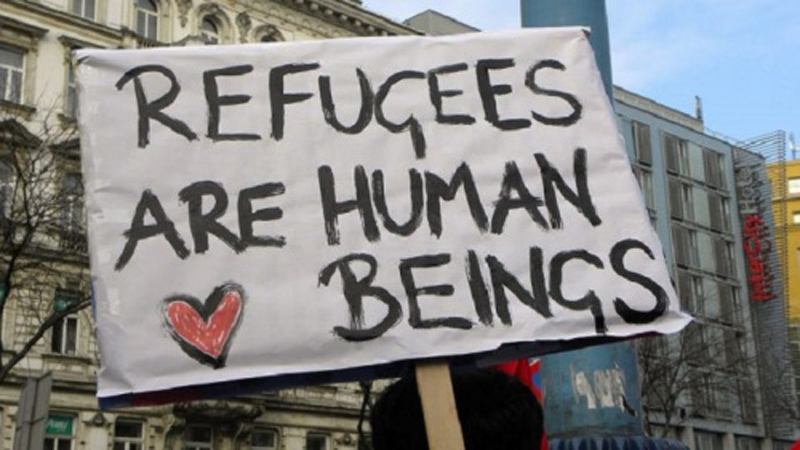 There is an endless tension between the desire to leave your home and being coerced to do so. The coercion paves into a completely alien concept of what ‘home’ means, something Saeed and Nadia face in Mohsin Hamid’s (2017) novel, ‘Exit West’. If you’ve read the book, or even if you haven’t, this struggle sounds sad. It rings of homelessness, of hopelessness. This is what I felt until I attended a talk by Mohsin Hamid himself at the John Adams Institute in Amsterdam. It was the first ‘cultural’ event that I went to after moving to Amsterdam. As though the excitement of being in this city was not enough, I was meeting my all-time favourite author from my city, Lahore. I have to say this provoked a sense of nostalgia in me, ever-growing as I sat looking at strange faces listening to Hamid intently, who turned out to be quite a funny person indeed.

In the book, we escape cliché country-specific determinism by leaving the reader unknown of the scene’s locality. Is it Afghanistan, Iran, Iraq, Pakistan? It could be any or none of these. All we find are Saeed and Nadia sharing an unexpected intimacy through their eagerly scheduled hash-smoking nights in a country that is on the brink of fragility and war. The two characters heavily contradict each other. When Saeed asks the question, “If you don’t pray, why do you wear it [burqa]?”, Nadia replies saying, “So men don’t f**k with me” (p. 16-17). Saeed is a handsome young man whose “studiously maintained” (p. 3) stubble is something Nadia finds comfort in. He enjoys moments of telescope-gazing with his father on the balcony – what his father likes to call “time-travel” (p. 15). In the development of a war milieu – one that is (in) directly experienced by everyone, days, weeks, or months later, the reader finds a point when it’s now a fact that the town is no longer habitable. This evolution passes through different temporal and spatial stages of Saeed and Nadia’s lives and demonstrates how their now so hybridised lifestyles affect their changing emotions and personalities. You’re forced to think, were Saeed and Nadia meant to be lovers? Was their dramatic set-up begging for romance? Most importantly, if they had stayed in their crippling town, would they have remained lovers?

As their town breaks down, they begin to hear rumours about ‘doors’ “that could take you elsewhere, often to places far away” (p. 72). At first, it seems superstitious to the reader, but soon enough, Hamid’s magical realism takes control over our expectations thereof, and these doors can, in fact, take you elsewhere, to places far away. These doors are exceptional occurrences for Saeed and Nadia, hoping they’d fly to a safe place, a camp, where a new life could be built together through sleepless nights in each other’s comfort. However, the reader at the beginning of their journey fails to realise that where these doors will take them – a camp, two camps, or three camps – will not remain an exception but rather become a normalcy of their lives. This limbo state is what Agamben (1998) in his book, ‘Homo Sacer’, calls the ‘nomos’ of modern society. It’s when a set of people are placed in a demarcated space and time by a government or state that does not identify as ‘normal’ society. For Agamben, the camp – in the case of Exit West, a refugee camp – is the norm of modern sovereign society. As Saaed and Nadia approached a door for the very first time, Nadia felt its “opacity […] the way that it did not reveal what was on the other side, and also did not reflect what was on this side, and so felt equally like a beginning and an end” (p. 103). This paradoxical uneasiness symbolises the sense of confusion Saeed and Nadia experienced after passing the door. They end up in Mykonos, then London, then Marin, and who knows where but always in a territory where their physical bodies fail to come into contact and experience those outside these territorial lines. As a reader, you never know whether they have been in one camp for days, weeks, months, or years. All Saeed and Nadia know is that they have to move. Contrary to this, you would think that if they were an integrated part of the host city outside the camp or back in their hypothetical non-war-stricken town, time would continue as normal and so would their lives.

In the development of a war milieu, the reader finds a point when it’s now a fact that the town is no longer habitable. This evolution passes through different temporal and spatial stages of Saeed and Nadia’s lives and demonstrates how their now so hybridised lifestyles affect their changing emotions and personalities

In this hypothetical ‘other’ life, untouched by irregular spatial and temporal loops, Saeed and Nadia could have settled down together. As they become subject to routines of the camp, their intimate relationship gradually trickles down to nothingness. A tension and a form of hostility comes into shape for the reader, which is hard to accept given their almost perfect romance that began in a town “not yet openly at war” (p. 3). The change in themselves, their identities, affects how they perceive each other. At one of their many stops, they find a bath, something they have not seen in days, weeks, or months. All Nadia wants to do is take a bath. As she strips, “she thought her body looked like the body of an animal, a savage”, and she does not want to stop the hot water from striking her cold flesh (p. 124-125). Saeed asks, “What the hell are you doing? […] It’s been forever. This isn’t our house” (p. 125). Irritated and dirty himself, he has forgotten the satisfaction of the basics of proper food, a toilet, hot water to bathe in. Slowly, both he and Nadia unintentionally fall into an antagonistic emotional tie, which does not do justice to the way they looked at one another before they stepped through a door. During their first few meetings, Saeed usually had “an amused expression in his bright eyes, not mocking, but as though he saw the humour in things, and this, in turn, amused her and made her warm to him” (p. 24). But now, they begin to wander separately during the day, sleeping by each other’s side at night without feeling any need of sexual intimacy or even a kiss.

The illusion of permanence is what they experience. It’s uncontrollable, which makes it desolate. This is what I felt when I first finished the book. But on that day at the John Adam’s Institute, Hamid said, “The doors are not fantasies but an emotional representation of human reality”. When we think of ourselves, it’s easy to think the ‘self’ means myself, my body, the way I think, my personality. What is the ‘self’, though? When I moved away from Lahore for university, I used to think that I am one person and will always intrinsically be who I was in Lahore. What I’ve found over the years is not at all that. I’ve been evolving – my thoughts are never the same, my interests change, and how I used to think about some people, issues, and concepts, all change. They still are. It makes it difficult to say that I possess a permanent self, simply because with these changes come new meanings that I prescribe to things, decisions, and actions concerning these things. I’m a hybrid – and so are you.

This hybridity is intrinsic to the human condition. The variations experienced in your self-hood are not all imposed by you, as a free human. They’re partially a reaction to the outside world – uncontrollable objects and events that weigh onto your internal thoughts. What comes from this is a struggle that Simone de Beauvoir (1947) discusses in her book, ‘Ethics of Ambiguity’. The perpetual development of emotions and personalities as Saeed and Nadia travel through door to door is an attempt to transcend the given environmental conditions burned on them by becoming a refugee. In a rebellion acceding to the outside world, Beauvoir would say their escape to countless camps – assuming they did so to survive – was not of their own choosing. But to gradually realise that Saeed finds comfort in memories of time-traveling with his father, while Nadia wants to let go – or perhaps she had already years before as she moved out of her parents’ house – was them activating their very salient humanness. In this new space, “old habits and structures no longer make much sense”, and “new identity positions are made possible”. As Hamid told us during his talk in Amsterdam, you can even observe the characters’ relationship following a more traditional, potent form of love, where romance represents itself in the ‘tragic’ condition of human existence – of creating the self by oscillating between the inside and outside world. As such, individual freedom is situated in utter complexity, with an element of growth and development that makes Saeed and Nadia’s separation unalloyed, not tragic.

The novel ends with a scene at a café, in the hometown they once fled. Both are old, Saeed with silver hair and Nadia still covered in a burqa. “Their conversation navigated two lives […] Nadia said imagine how different life would be if I had agreed to marry you” (p. 230). Indeed, life would have been very different. The comfort they first found in each other could have remained. To feel grief over the loss is rightfully so, but it’s important to remember that their “passage was both like dying and like being born” (p. 104), and they both knew so.

The writer is a BA graduate in Liberal Arts & Sciences from University College Maastricht in The Netherlands and is currently working with TEDxED Amsterdam in organizing events for educational reform. She is also a freelance writer and can be reached at sheikh.nrahmat@gmail.com