Legality of the Syria strikes — I

A strong case of self-defence could be made for Syria against the US, UK, and France. The threats are not fake

The latest Syria sabre-rattling started with a threat from President Trump. He tweeted that missiles at Syria ‘will be coming, nice and new and ‘smart!’’ Since Russia is not a defenceless nation, the nasty threat was hurled at her Middle Eastern ally. Assad was threatened because he allegedly committed a crime that western democratic nations rarely ever commit. He killed his own people in a ‘suspected’ chemical attack.

The rest of the tweet says, “You shouldn’t be partners with a Gas Killing Animal who kills his people and enjoys it!” While nobody knows for a fact that Assad is killing people to satisfy his sadistic urges, the interesting part is the wording ‘his people’.

Since strong nations generally and western democratic nations particularly do not or rather cannot kill their people but kill an enormous amount of people in other countries by employing the most brutal killing machines, the noise is, therefore, always made over the hated leader killing ‘his people’. The hated leader is never killing people in other countries. That is a western concept only. Therefore, killing ‘other people’ is somehow not included in the list of punishable crimes. 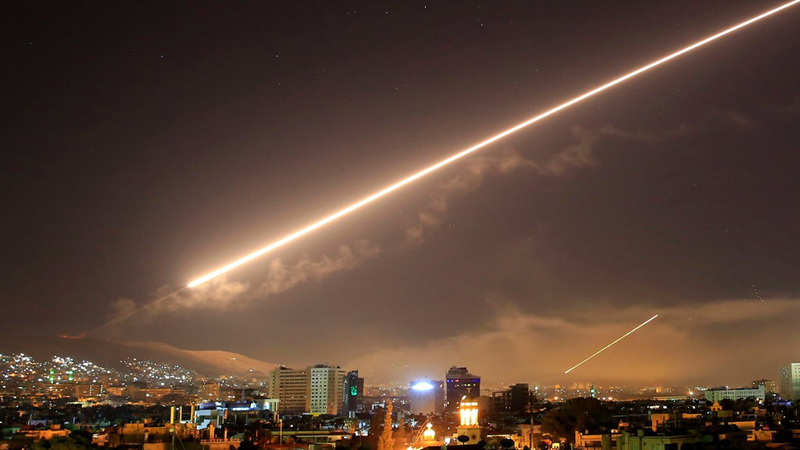 R2P this week stood for responsibility to Punish. The United States, along with Britain and France, unleashed a barrage of missiles, which included varieties like Tomahawk missiles, cruise missiles, and Storm Shadow cruise missiles. The early morning dark sky was lit over Syria. The weary citizens must have wondered how come they were banned from going to America but missiles were delivered to punish the man who subjected them to a ‘suspected’ chemical weapons attack.

Macron’s ‘Red line’ 2.0 was crossed. Obama had warned Syria with ‘Red line’ but didn’t follow through on his threat, which was so un-American of him. Issuing a threat and then following through on it is called ‘credibility’ in the United States. Obama had damaged that. He is criticized not for issuing a threat but rather for not following through on it. Not a single word about the fact that such threats and attacks violate the international norms, a western habit when practiced by others earn them the title of ‘rogue state’. May of England said the Storm Shadow cruise missiles served British interests. It just brought memories of Madeleine Albright when she said of the half a million dead Iraqi children due to US sanctions, ‘we think the price is worth it’.

France had in the wake of Obama’s ‘red line’ agreed to attack Syria. England had not. In the 2003 invasion of Iraq, UK was in and France was out. My contention is this has to do with which country used to be whose colony. Iraq was English and Syria was French. That would explain the lowest contribution that Britain made to this attack. That may explain why Germany refused since German colony was Namibia not Syria.

The United Nations charter minces no words over threat and the use of force against other nations. Article 2(4) of the UN charter, ‘All Members shall refrain in their international relations from the threat or use of force against the territorial integrity or political independence of any state, or in any other manner inconsistent with the Purposes of the United Nations.’ This threat and the attack are flying in the face of the UN charter. Interestingly, calls of regret are heard from US ambassador Nikki Haley that Russia is protecting a monster with its veto power. The same international body’s charter is not respected while issuing threats and attacking nations. It goes without saying that America with its veto is protecting a much bigger

Middle Eastern monster that kills Palestinians (not their people) and a stronger case could be made that they enjoy these killings. Furthermore, it is noteworthy that America wasn’t attacked. Article 51 of the UN charter allows for a state to use force against another if an attack has occurred. According to Georgetown professor Anthony Clark Arend, the restrictive interpretation believes that the language of article 51 clearly requires for an attack to happen before the use of force can be legitimately justified.

The less restrictive interpretation doesn’t require the states to wait for the use of force until an armed attack has occurred. Many scholars believe that there are situations where a first strike could be justified as a matter of self-defence. Professor Michael N Schmitt of the United States Naval War College argues that for a first strike to be justified as self-defence, three conditions must be met. The other state must have the ability to attack. It must be evident from the behaviour of the state that an attack is imminent. There must be no other way to stop it.

By that standard, a stronger case of self-defence could be made for Syria against the US, UK, and France. The threats are not fake.