The woeful state of education in Balochistan

Most surprisingly, in Balochistan, out of 13,000government-run primary schools,over 5,000 are reported to have only one teacher

It is said that if an authoritarian regime wants to ensure its longevity, the first thing it attacks is the educational system of the country, for an uneducated and an illiterate nations is nothing by herd of a cattle that can be easily exploited. The fact that fascism depends on obscurantism cannot simply be gainsaid.

The same can be said about our own province, Balochistan, where tradition of deliberately keeping people uneducated has passed on to generations. The absence of education and awareness, and presence of ignorance in Balochistan manifests itself in different harrowing forms.

In one of its reports on Balochistan’s education sector, Alif Ailaan, reveals that there are formidable challenges that the education sector faces in Balochistan. However, the Balochistan Education Sector Plan (BESP) – approved in 2013 – has reportedly highlighted that “whilst there has been a substantial increase in the allocations for education by the government, the impact of these huge investment is less than clear”.

According to estimation,  70 percent of children in Balochistan are out of schools. Most of the government schools in Quetta, and particularly in rest of other rural areas of the province, are operating without electricity, boundary walls and basic facilities such as drinking water. 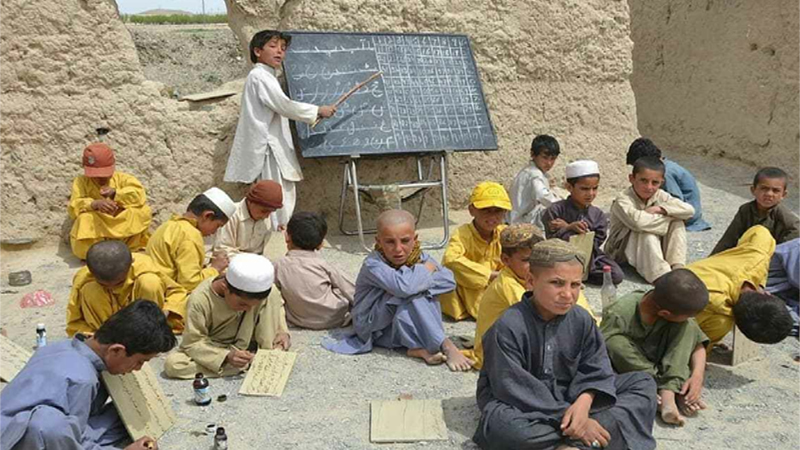 The report further revealed that at least 60 percent of children in Balochistan drop out by the time they reach primary level, whereas 45 percent of students quit prior to completion of matriculation.

According to the National Education Management System, 66 pc girls of primary school age are out of school while the overall enrolment ratio is only 47pc. There is also grim factor appears about low literacy ratio (43pc, with only 25pc for women) in Balochistan.

More surprisingly, in Balochistan, out of 13000 more than 5,000 government-run primary schools are reported to have only one teacher.

A recent report published by Alif Ailaan has stated that  the government of Balochistan has invested time and resources for education in a number of structural reforms since 2013.

These were basically about to address some major key issues afflicted in education sector, such as poor infrastructure of schools, the shortage of teachers through merit-based recruitment. According to the Balochistan Education Sector Plan, BESP (2013-2018), the Balochistan government implemented reforms initiatives for bringing a quality standard to testing of learning levels, restructuring of the system through District Education Authorities ( DEA), and to work for, retention and learning outcomes etc. More woefully despite these reforms claimed by the provincial government, but, the crisis to education yet stands unresolved.

It is said that if an authoritarian regime wants to ensure its longevity, the first thing it attacks is the national educational system, for an uneducated and an illiterate nation is nothing but a herd of cattle that can be easily exploited

However, despite the sloganeering of education emergency since 2014 in the province, while the progress on ground is, so far, virtually at a standstill. The children are unlikely to get results from a so-called education emergency. Not only that, comparatively Balochistan saw, the consistent trends to cheating culture, discrepancies and some sort of other irregularities appear in more common than other provinces of Pakistan. It seems to happen in matter of routine perhaps in most of the academic exams in the province. More recently, in the last month, the students appeared in the entry test of Bolan Medical College ( BMC) alleged about discrepancies occurred during the test. It goaded them on staging protests and sits-in against the administration. And resultantly, many students who utterly lashed out at the mismanagement, were viciously thrashed and beaten up by the police. The students appeared in the entry test told that when they entered the hall they found so many irregularities, such as adjacent students having same book colour, different book colour with same sequence, paper exchanging between students and mobile usage etc. They also found the invigilators helping some specific students in the examination hall. No other discipline was maintained during the exam, after the test the wrong answer key were uploaded and delayed too.

“Finally the result was displayed according to the wrong answer key, because of which we the entry students are on protests since 5 February”, said the students. It also ultimately led them to file a case in the Court. They want the authorities to conduct a test afresh with all consideration of upholding the merit system.

This is a single example which reflects many in such cases that unfortunately happens in most of the schools, colleges and somehow in university level of exams in Balochistan.

However, on the other hand, a bulk of students also opine that merely curbing cheating in the exams does not produce good results unless we overhaul the entire examination systems of the province.

The former senator Sana Baloch a popular leader in the province, in his several interviews he expressed dismay over the treatment of the federation towards the province. “The federation looks at Balochistan with a fixed mindset and narrow perspective; and tried to achieve long term means at the cost of backwardness and bleak future for millions of children in Balochistan”, observes Sana Baloch. He added that systematic oppression, bad governance, corruption, mismanagement of natural resources, etc have created a black hole of social crisis, amongst which the education sector in the province is worst-hit.

There is no denying of the fact that a prosperous nation will always imbue with the true spirit of developments, is therefore; first they opt to be moulded into a proper shape by its educational progress. A truly viable educated society will learn to fight the injustices of all kinds. The idea of an educated society will obviously venture to resist fascists and arbitrary regimes. Last but not the least, a vastly enlightened society will develop through the ladder of education. Contrary to this, for people like that of Balochistan, the educational progress still seems like to remain a distant dream.

Unfortunately, the people of Balochistan are still victims to a medieval outlook and remain comparatively fall behind in the field of education.

One cannot turn a blind eye to the fact that the situation in Balochistan is far more complex than deprivations. The government should not skate over the crisis of education in the province. The sane solution only lies in promoting education and giving the children of Balochistan their rights to education.

The writer can be reached at masoodhameed916@gmail