The war in Syria is not an out of control affair. It is a deliberately ignored issue. If the world powers really want to end the sufferings of the Syrians than all it takes is a sensible talk between Russians and Americans and the matter shall be resolved by acting against Bashar al-Assad in much the same way as was made against many others in the past. Do the lives of so many innocent people worth less than the egos of the superpowers?

Or is it something else that is stopping them from taking action against al-Assad? If one looks at the world right now, it is easy to identify that there are only a few places left where there is ongoing open conflict. Most of Middle-East is already subdued. Moreover, there is a government in place in Afghanistan. So Syria is the only place where the troops of the world superpowers can go and harness their fighting skills.

It seems as if Syria is one big simulated ground for the future wars and the world superpowers are more interested in keeping the war ongoing so that they may send their troops in there and train them on live incidences instead of providing them training in simulated environments. What’s more, there are live targets to shoot and the real buyers of the weapons.

The current Syrian regime and the non-jihadi opposition parties should be brought to the table,and a ceasefire should be signed immediately

Ghouta is not the first city in Syria where senseless killings of innocent citizens are ongoing. Only a few months back, the whole world media was reporting about Aleppo, or Idlib and many other cities. The number of casualties in Ghouta will be hard to imagine and a shame for the world superpowers to report. However, the war will go on because Russians cannot lose a man they believe is in their favour and Iran cannot stop playing a double game.

Just because al-Assad is from Shia sect doesn’t mean that Iran can keep on supporting him even if he annihilates the whole Sunni population of Syria. The war will also go on because the US does not want to lose a training ground for its troops. Moreover, for the UN, a member state’s veto power — which is just a theoretical concept — is far heavier than the coffins of the children. UNICEF also cannot absolve itself of the responsibility by stating, “No words will do justice to the children killed, their mothers, their fathers and their loved ones.” 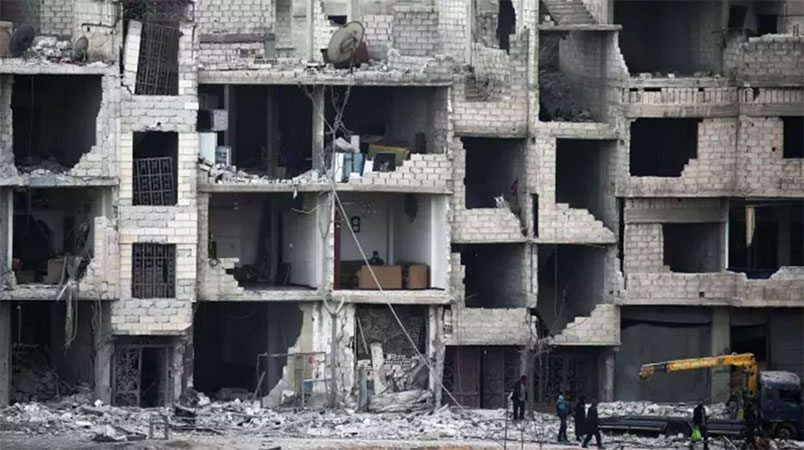 On Monday, Russia announced its plans to build a humanitarian corridor for the people of Ghouta to flee or to get help from the international aid agencies. However, instead of just this move, the Russians — as well as Americans, Turks, Jews and Iranians for that matter — can propose a diplomatic solution as well to the problem. Instead of a few hours of ceasefire for a month, the world should force Bashar al-Assad and his allies to look for lasting peaceful solution for the conflict.

How about finding a two-state solution? If it can be proposed in the case of Palestine and Jewish conflict, why it cannot work in Syria? Russia does not have control over all the Syrian cities. Those cities that are under the influence and control of Bashar al-Assad may be left to him, and the rest of the Syrian should be turned into a safe place for the migrating Syrians. The UN should then guarantee the safety of the newly formed nation-state.

The current Syrian regime and the non-jihadi opposition parties should be brought to the table, and a ceasefire should be signed immediately. Moreover, a referendum should be held wherever possible about splitting Syria into two nation-states: one ranging from Damascus to Latakia (much of Western Syria) and the other from Eastern Damascus to Aleppo all the way to the eastern desert.

This formula is not new. However, something on these grounds should be acceptable to the all the Syrians mainly because Eastern Syria consists of ‘moderate’ Sunnis that are opposing the al-Assad’s regime, whereas Western Syria consists of Shiites, Christians, Druze and Alawites. The opposition to this plan would undoubtedly come from Bashar al-Assad himself. However, Russia should play a role in managing him and convincing him for adopting such a formula for lasting peace in Syria. If no such solution is quickly found that even those that are living under the direct rule of al-Assad will continue to live in fear, as ICRC said, “people in Damascus are in constant fear that their children will be hit by falling mortars.”

The writer is an Assistant Professor. He tweets @Prof_MKShaikh