His undeniable popularity is manifest in his body of work, including songs that connect with hearts and minds of our cricket-loving nation

LAHORE: After the massive success of the last two years, one of Pakistan’s leading multi-talented superstar Ali Zafar is back for the third time with a third anthem as the voice and soul of the Pakistan Super League (PSL).

Ali Zafar’s undeniable popularity is manifest in his body of work and songs, which connect with the hearts, and minds of our cricket-loving nation. He continues to champion cricket through his ownership and passion for the sport. Indeed Zafar has also composed the official anthem “Ab Khel Kay Dikha” for the PSL debut season and “Ab khel jamay ga” for the second year of PSL, the latter of which has been seen and heard over 6 million times on YouTube alone.

“Two things that lie at the heart of our nation’s DNA are cricket and music and I am extremely fortunate to live these two passions in this lifetime. As exciting as it is to write, compose and to sing PSL’s official anthem for the third time, it was actually quite challenging given that last year’s anthem was such a massive hit. I cannot explain how humbling it was to hear it play from every car, home and in every street when the final came home to Pakistan. In fact, when I was writing it, I wrote the entire chorus based on the vision, hope and dream of cricket returning to Pakistan, and we are very fortunate that it did! This year’s anthem takes that thought further and it is based on a celebration; that last year’s dream was fulfilled, that the PSL embraces the very essence of cricket and pride; that Pakistan and Pakistanis will take the Super League to the next level again this year,” Zafar said. 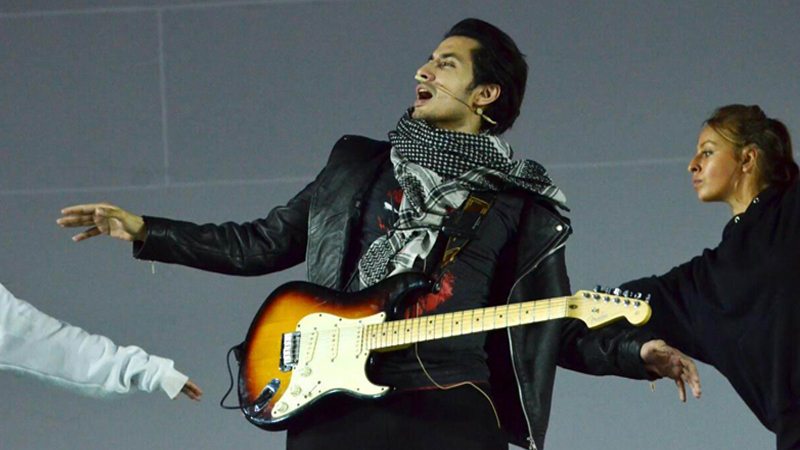 On the acting front, Zafar’s Pakistani film debut titled ‘Teefa in Trouble’, directed by maestro Ahsan Rahim and co-starring Maya Ali is due to release in 2018.

“Dil Se Jaan Laga De” has been composed, written, produced and sung by Zafar and is slated for an early 2018 release.

Zafar is a Pakistani singer-songwriter, model, actor and painter. Zafar started out on Pakistani TV before becoming a popular musician. He then also established a career in Hindi cinema and his success led many Pakistani actors to venture into Hindi films. He has received five Lux Style Awards and a Filmfare Award nomination.

Zafar started his career as a music composer and gained popularity by his single “Channo” from his debut album ‘Huqa Pani’ which sold over five million copies worldwide. “Channo” turned out to be a huge success topping many music charts and earned him several awards for Best Music Album and Artist.

Zafar made his acting debut with a leading role in the 2010 Bollywood satire film ‘Tere Bin Laden’, a moderate box-office success. His performance in the film garnered critical appreciation and earned him several nominations in the Best Male Debut category, including Filmfare. He then also worked in several films, including ‘Mere Brother Ki Dulhan’, ‘Chashme Baddoor’ and ‘Dear Zindagi’.

‘Two things that lie at the heart of our nation’s DNA are cricket and music and I am extremely fortunate to live these two passions in this lifetime. As exciting as it is to write, compose and sing PSL’s official anthem for the third time, it was actually quite challenging given that last year’s anthem was such a massive hit’

Alongside his acting and singing career, Zafar participates in tours, concerts and stage shows, is active in humanitarian work and has a number of endorsement deals. In 2013, Zafar was voted as the Sexiest Asian Man on the Planet based on a worldwide poll by the British newspaper Eastern Eye.

PSL is a men’s professional Twenty20 cricket league, sanctioned by the Pakistan Cricket Board that represents the sport’s highest level in Pakistan. The league was founded in Lahore on September 8, 2015 and presently comprises six teams. Instead of operating as an association of independently owned teams, the league is a single entity in which each franchise is owned and controlled by investors. The commercial rights to the initial franchises were sold for $93 million for a span of 10 years in December 2015. The PSL season runs between the months of February and March, with each team playing 10 matches in double round robin format; the top 4 teams with the best record qualify for the Playoffs and culminates in the championship game, the PSL Cup Final. The league’s head offices are directed out of the Pakistan Cricket Board head office in Lahore. Due to the security reasons, the first season was played entirely in the United Arab Emirates. The inaugural champions were Islamabad United. Peshawar Zalmi are the 2017 PSL Champions, having defeated Quetta Gladiators in Lahore on March 5, 2017.

The writer is a freelance journalist. He can be reached at hamidjahan@gmail.com