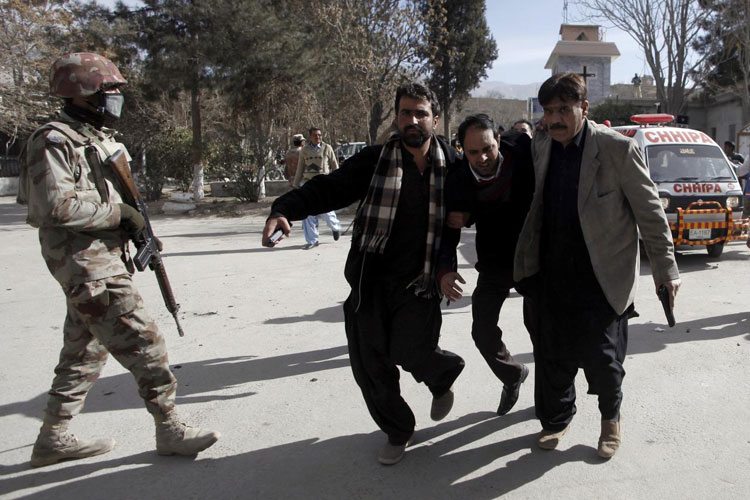 ISLAMABAD: President of Pakistan Mamnoon Hussain and Prime Minister (PM) Shahid Khaqan Abbasi have on Sunday condemned the terrorist attack on Bethel Memorial Methodist Church in Quetta that claimed at least 8 lives and left another 44 injured.

The two highest officials of the government prayed for the souls of the departed and expressed their sorrow. The president stated that such cowardly attacks would not be able to shake the nation’s resolve to fight terrorism.

Talking to media, Interior Minister Ahsan Iqbal said that the enemies of Pakistan wanted to spread chaos in the country. He said that Islam preached respect for the worship places of all the religions and reiterated that protection of the religious freedom of the minorities was everyone’s duty. He also vowed to continue the war on terror till its logical end.

Sindh Chief Minister Syed Murad Ali Shah condemned the attack and ordered to augment the security at all the churches throughout the provinces. He expressed solidarity with the Christian community of the country.

Pakistan Muslim League – Nawaz (PML-N) Member of National Assembly Khalil George condemned the incident and especially admired the police and other security forces for neutralising the terrorists, avoiding a major ‘APS-like’ tragedy in the city.

Religious scholar Maulana Tahir Ashrafi said that it was an attack on Pakistan. “It is the duty of the state to provide protection to the minorities in an Islamic country”, he said. Ashrafi also appealed to the Muslims living in Quetta to donate blood to their Christian brethren.

Former Interior Minister of Pakistan Senator Rehman Malik says that the attack clearly has links with India, and is aimed at maligning Pakistan.