Human Rights Watch reported that there is no travel route, no shopping trip, no school, or no work place that is safe for the Hazaras 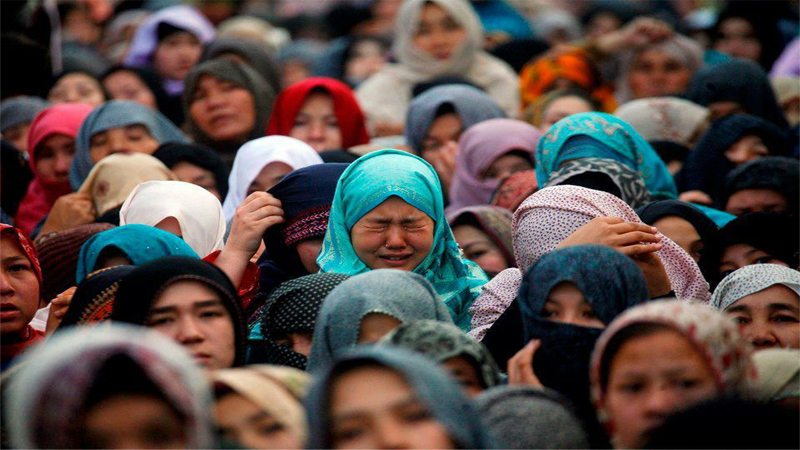 On Monday Morning October 09, 2017, two unidentified motor cyclists opened fire on the van that transported Hazara vegetable vendors to the market near Allah Dana Street on Kasi Road Quetta, killing five people, three of whom were of the Hazara community.

This is not the first time that people of the Hazara community have been killed but shockingly, the community that belongs to the Shia sect of Islam has been frequently targeted by various Sunni terrorist groups including Tahreek-e-Taliban Pakistan, ISIS, and Lashkar-e-Jhangvi in Pakistan.  In the vicious cycle of targeted attacks for last two decades hundreds of Hazaras have been killed mercilessly.

The Hazara community, a small community of nearly half a million-people living mainly in and around Quetta, are easily identifiable because of their distinctive physical appearance, has been undergoing sectarian terrorism since 2002. According to a report, 1400 terrorist incidents targeting the minority Shia and Hazara community have occurred in Pakistan, in which hundreds of Shia Muslims especially Hazaras have been killed mercilessly.

The first deadly suicide attack targeting Hazaras had occurred in a mosque at Quetta in July 2003, which had killed more than 53 people and injured 150. The year 2013 had proved to be the most devastating and misfortunate year for the Hazara community of Pakistan.

In January 2013, a snooker club in Quetta most frequented by youth of the ethnic Hazara community was made a target of a suicide attack which killed more than 96 people. After a month, at least 84 lives of the ethnic Hazaras were cut short in suicide bombing taking place in a crowded vegetable market mostly used by the ethnic group.

In February 2013, in protest for their protection, and justice and stringent action against terrorist groups involved in their killings, Hazaras refusing to bury dead bodies had sat on the roads of Quetta with the coffin of their beloved ones. In their support, roads across Pakistan were blocked. In response, the Pakistani government convinced them to hold funerals and bury dead bodies.

They also made promises with them of providing foolproof protection and justice.   The promises of the government have proved to be spurious as the community has not yet been provided security and is still vulnerable to terrorist attacks.

It is pertinent to mention that Hazaras were warned of leaving Quetta voluntarily by the end of 2013 or else they would experience appalling consequences, but they did not leave the city till the given deadline.

As a result, the devastating and relentless cycle of deadly suicide attacks was carried out. After finding no other way of getting rid of the horrific situation, around 70,000 people from the community have migrated to Australia, New Zealand Europe via Malaysia and Indonesia, selling off their houses, shops and other business assets. Human Rights Watch reported that there is no travel route, no shopping trip, no school, or no work place that is safe for the Hazaras.

In Iran, the majority of Persians share the Shia Muslim faith with the Hazaras. However, the former asserts racial superiority over the latter by discriminating against them. Thus Hazaras find themselves being called Khawaris or Barbarians, owing to their phenotypic similarities with the Mongols

The undeniable fact is that from economic, political, social and education perspectives, Balochistan is the most backward province in Pakistan. The Hazara community with currently high enrolment of girls and boys in schools is one of the most educated communities of the province. A great number of the people were serving in various private organisations, government departments and universities. Many of them were entrusted with key positions and responsibilities.  Not only are the Hazaras the educated people, but they are also an inspiring example of community awareness and development.

The people keep streets and roads neat and clean and effective sewerage system in their localities. It shows that people of ethnic Hazara were a great social and economic asset for Balochistan. But despite having these qualities, life remains miserable and constantly dangerous for them. The ruthless killing and mass migration of Hazaras from Balochistan is an immense social and economic loss for the province.

Not only in Pakistan, the Hazaras undergo enormous hardships, widespread discrimination and cruel displacement in Afghanistan and Iran also. Although in Afghanistan, they constitute the third largest ethnic group, they have been facing indiscriminate maltreatment and violence by the dominant Pashtun community. In Iran, however the majority Persians share the common Shia Muslim faith with the Hazaras, the groups asserting racial superiority treat them discriminately. In Iran, the Hazaras are called Khawaris or Barbarians owing to their phenotypic similarities with the Mongols.

The Hazara community has been raising its voice at every national and international forum against their brutal massacres and social, educational and economic blockade in Pakistan. The Hazara diasporas have organised demonstrations in more than 20 countries of the world to record their protest against persecution of people of their community in Pakistan.

They have decided to knock at the doors of international communities, the United Nations and human rights organisations to ask them to intervene to prevent genocide of their community members.

The Pakistani government should take tangible initiatives and devise a clear policy to ensure protection of basic human rights of the Hazara community. Hazaras have been rendering remarkable services in various spheres of life and have been living peacefully in a civilised way; it is the moral and constitutional responsibility of the government to give them respectable status, dignified treatment and reward in lieu of their adherence to the law and the fundamental responsibility of citizenship.