Sonam decks up in ethnic wear; Anil calls her ‘classic,’ Sunita is all hearts 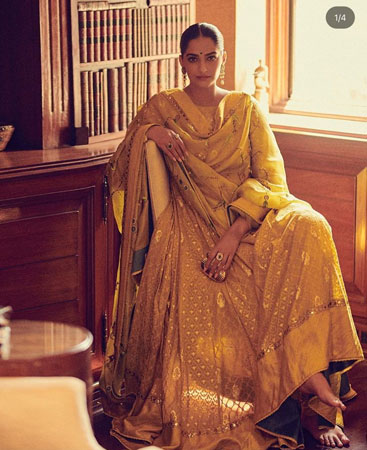 Bollywood actor Sonam Kapoor on Thursday shared a new set of pictures of herself on social media. The photos seem to be from some wedding celebration. The photos have Sonam all decked up in an ethnic outfit, and just like her many fans, her parents Anil Kapoor and Sunita Kapoor also swooned over her. Sonam is seen wearing a yellow Anarkali suit. She has tied her hair in a bun and has decked them with a gajra. The actor has kept her look minimal, skipping any huge piece of jewellery and has only worn earrings. Along with the photos, Sonam wrote, “day 1 of #VSNEAKEDIT.”

Anil Kapoor commented on the pictures and called his daughter’s look “classic.” Sonam Kapoor’s mother Sunita Kapoor dropped several red heart emojis in the comments section of the post. Her aunt Maheep Kapoor also showered love on her niece. After looking at the pictures, Anushka Sharma called Sonam “Beautiful.” Many fans of Sonam also found her pictures “stunning” and “gorgeous”. One of the comments on the post read, “Super Stunning?.” An Instagram user wrote, “Natural beauty.” One of the fans commented, “You look more beautiful day by day my girl.

Sonam Kapoor and her husband Anand Ahuja became parents to a baby boy in August this year. They have named the boy Vayu. On the work front, Sonam Kapoor was last seen in a special appearance in AK vs AK, alongside Anil Kapoor and Anurag Kashyap. Her upcoming feature Blind has her playing a visually challenged police officer. The film was shot during the pandemic in Scotland.