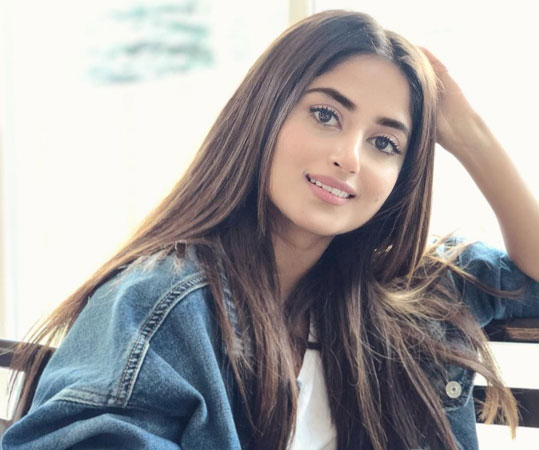 The ‘Sinf-e-Aahan’ star was one of the honourees from Pakistan at the recently held Filmfare Middle East achievers’ night. In her award acceptance speech, Sajal Aly made sure to acknowledge the ‘London Nahi Jaunga’ star for giving her the launching opportunity in showbiz.

While receiving her award on stage, the actor thanked the person ‘who believed in her for the very first time’. “He gave me the opportunity to perform in front of so many people. That was Humayun Saeed,” she said.

It is pertinent to mention that Sajal made her acting debut in ARY Digital’s serial ‘Mehmoodabad ki Malkain.’ The project was backed by Saeed’s wife, Samina Humayun Saeed and Shehzad Nasib under their banner Six Sigma.

About the event held last night, Filmfare Middle East Achiever’s night honoured artists from Bollywood, Arab and Pakistan. Pakistani stars Humayun Saeed, Fahad Mustafa along with Sajal were invited to the prestigious ceremony. The ‘Mom’ actor was spotted catching up with Bollywood buddies, she was all smiles while exchanging a hug with Bollywood starlet Janhvi Kapoor. Dressed in a stunning hot pink Saree, our very own diva also posed with the ‘Padmaavat’ actor Ranveer Singh at the night.