* Here, we are noting down a list of Pakistani movies that couldn't make it to the big screen in Pakistan throughout history 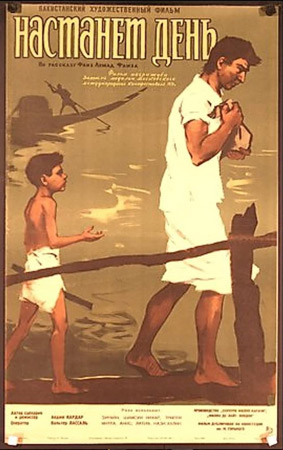 The practice of censorship has long been a source of controversy in Pakistani filmmaking.

It is safe to say that censorship and political repression have severely harmed Pakistan’s film industry. Here, we are noting down a list of ‘Pakistani’ movies that couldn’t make it to the big screen in Pakistan throughout history.

‘JAGO HUA SAVERA’ — Jago Hua Savera is a 1959 drama filmed by famous Urdu poet Faiz Ahmed Faiz and directed by AJ Kardar was based on the struggles of a poverty-stricken fisherman in the former East Pakistan – now Bangladesh. Just days before the release of the movie, the Ayub Khan regime banned it due to its “subversive socialist content”. The film resurrected in 2016 when it was screened at Cannes Film Festival.

‘KARTAR SINGH’ — The Punjabi film is based on the riots between Hindus, Muslims and Sikhs during the time of Partition in 1947. Helmed by Saifuddin Saif, the movie is based on the real-life incidents, but it was initially banned in Pakistan due to its sympathetic treatment of the hero who was playing a Sikh. Later, censor board cleared the movie for a theatrical release and it became one of the super-hit blockbuster Punjabi films in Pakistan and ranks highly in the history of Punjabi cinema.

‘JIBON THEKE NEYA’ — The 1970 film, Jibon Theke Neya, is a Bengali-language Pakistani movie directed by Zahir Rehman. The movie is metaphorically based on the Bengali Language Movement under the rule of Pakistan, where a dominating woman in one family symbolises the political dictatorship of Ayub Khan in East Pakistan. After the ban, the people of former East Pakistan staged protests, so the government cleared the film and released it.

‘INSAN AUR GADHA’ — Insan aur Gadha – written, produced and directed by Syed Kamal – is an Urdu language movie based on the human conditions in Pakistan. Just a few weeks after the release of the movie, it was taken down by the Zulfiqar Ali Bhutto regime due to a scene that mocked Bhutto’s signature style of delivering speeches. However, after a month, the movie was allowed to return to cinemas.

‘BEGAM JAN’ — The movie did well in Khyber Pakhtunkhwa, but it was not screened in other cities. Begam Jan is about a woman from the province who goes door to door selling items and gives birth to a child out of wedlock.

‘AURAT RAJ’ — Aurat Raj, directed by comedian Rangeela, is counted among the first feminist movies in Pakistan. It was released to much hype, ran in cinemas and then banned. This satirical take on a patriarchal society featured Rani, Waheed Murad and Sultan Rahi in lead roles. The film failed to leave a mark on the box office but went on to become a cult in Lollywood.

‘MAULAJUT’ — the 1979 classic Maulajut, helmed by Younis Malik, was suddenly taken down by the Zia regime, as they believed the movie is inciting rebellion in Punjab’s rural areas. However, soon after, the producer was able to acquire a stay order from the court and the movie was eventually allowed to run.

‘THE BLOOD OF HUSSAIN’ — The Blood of Hussain is a 1980 fantasy drama by Jamil Dehlavi about the life and death of the youngest son of a Pakistani family. The movie was banned by the General Zia dictatorship for depicting the regime as repressive.

‘MELA’ — directed by Hassan Askari and produced by Anwar Kamal Pasha, the film was another attack on the Zia dictatorship and was immediately banned. It was later broadcast on Channel 4 in the United Kingdom.

‘ZAR GUL’ — helmed by Salmaan Peerzada, Zar Gul is about a rebel and revolutionary fighting the oppressive state. The film was unable to obtain a clearance from the government for a wider distribution throughout Pakistan.

‘KHAMOSH PANI’ — directed by Sabiha Sumar, the story revolves around a family in southern Punjab affected by the increasing religious radicalization under the regime of Zia-ul-Haq. It was banned before even its submission for review because it had Indian actors.

‘SLACKISTAN’ — Salikistan is an independent film directed by Hammad Khan which is about a young man who is juggling between personal and professional lives while living in Pakistan during political turmoil. Central Board of Film Censors (CBFC) banned the movie over the use of swear words in English and Urdu, and the words ‘Taliban’ and ‘lesbian’.

‘BESIEGED IN QUETTA’ — the documentary film by Asef Ali Muhammed is about the plight of Quetta’s Hazara community. It was banned for portraying ‘the negative side of the country’.

‘AMONG THE BELIEVERS’ — the documentary film directed by Hemal Trivedi and Mohammed Ali Naqvi was banned by CBFC for containing “dialogues which project the negative image of Pakistan in the context of ongoing fighting against extremism and terrorism”.

‘MAALIK’ — the political-thriller film was directed by Ashir Azeem. Just a week after its release, it was banned by Sindh Board of Film Censor. However, on 7 September 2016 the ban was lifted by Lahore High Court (LHC) and the film was re-released on limited screens.

‘VERNA’ — Shoaib Mansoor directorial revolves around a rape victim and her struggles. CBFC stated, “The general plot of the movie revolves around rape, which we consider to be unacceptable.” After protests against the decision, the film was released without any censorship.

‘JAVED IQBAL: THE UNTOLD STORY OF A SERIAL KILLER’ — the movie is based on real-life events of serial killer Javed Iqbal, directed by Abu Aleeha. A day before its release, the film was abruptly pulled up by CBFC, despite it initially receiving censor approval.

‘Zindagi Tamasha’ — directed by Sarmad Khoosat, Zindagi Tamasha is a drama film that shows an intimate portrait of a family who lives in Lahore. The release of the film was suspended after the religious uproar. Tehreek e Labbaik Pakistan (TLP) protested on the release of this film, and further accused Khoosat of blasphemy.

‘DURJ’ — written and directed by Shamoon Abbasi, it is a mystery thriller film, based on true events, mostly around cannibalism. It was banned by CBFC which cited it as being “inappropriate” for public viewing. But, it was later allowed for local release.

‘I’LL MEET YOU THERE’ — a drama film by Iram Parveen Bilal that portrays a Pakistani-American family in Chicago. CBFC banned the film citing that the film “does not reflect true Pakistani culture” and “portrays a negative image of Muslims.”