* PTI chief reiterates demand for immediate fair elections
* We are humans, not sheep, so don't treat us like animals
* Demands removal of officials behind alleged torture on Swati
* Urges CJP to take notice, protect fundamental rights 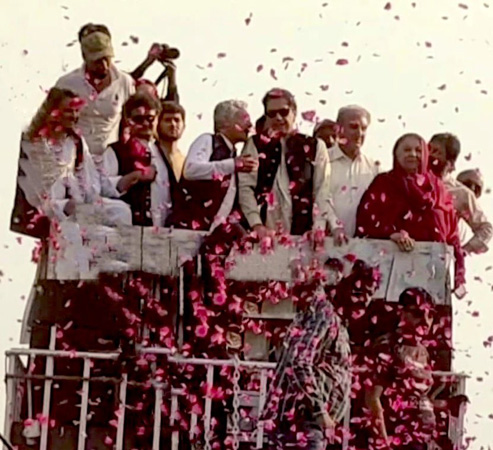 Former prime minister Imran Khan on Saturday reiterated his demand for “immediate fair elections” adding that, “no one can prevent that”.

Addressing participants of the long march, he asserted that his party would remain within the bounds of the law and the Constitution during the march. “However, protesting is my right. The Constitution permits me to peacefully protest,” he said.

Imran Khan said “Mir Jaffar and Mir Sadiq” committed treason against the country under ‘foreign conspiracy’ and imposed ‘thieves’ on the country. “Freedom is not given. Freedom has to be snatched,” he said. “We have to get freedom from those who have enslaved us and imposed a cabal of crooks on the country. We have to liberate our country,” he added.

Imran Khan said it was highly regrettable the way a 75-year-old senator was picked up and tortured. “I want to tell all of them today that we are humans and not sheep,” he told supporters at Lahore’s Shahdara. Without naming any specific individual, Imran said “don’t treat us like animals”. “Don’t treat us like animals, that you first call them robbers and then impose them on us, and tell us bhair bakrian (sheep) that now move in this direction. You first tell us the Nawaz Sharif was a robber and now he is clean. Previously Zardari was ‘Mister 10 per cent’ in the world and but now since ‘we have decided, you also accept him’.” He exclaimed again “we are not bhair bakrian” and that “you are standing with them today”. 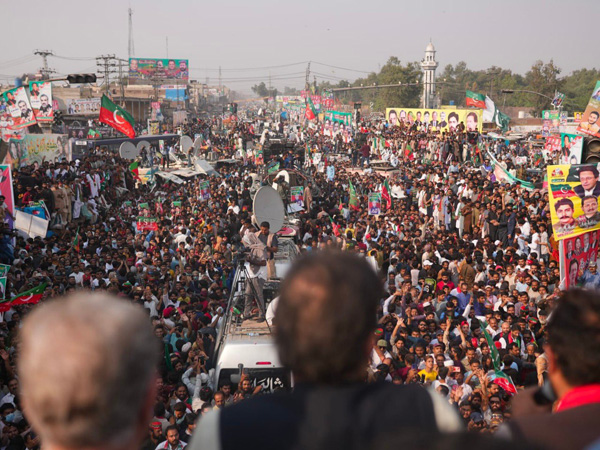 PTI Chairman Imran Khan has hailed the “unprecedented numbers” coming out for the party’s long march to Islamabad. “Pakistan will change forever with the nation making clear it will not accept any individual or institution being above law,” he tweeted, adding that this is what he had set out to achieve in creating the PTI 26 years ago.

Imran Khan urged Chief Justice of Pakistan Umar Ata Bandial to protect the fundamental rights and also to take action against the “custodial torture” of PTI leader Azam Swati. “You should know why I am on the streets at the age of 70. The only reason I am marching is because you are like my children and I want you to be educated and know what real freedom is,” said the former PM while addressing the long march participants at Shahdara, Lahore.

The PTI chairman said that when he condemned the torture of Shahbaz Gill, a case was filed against him, adding that he had opposed torture during detention. If action had been taken then, Azam Swati would not have been so cruel that he would have been forced to think of suicide. “Chief justice sahib, it is your job to protect fundamental rights. The nation is looking towards you. Action is taken against custodial torture across the world – Who will protect our fundamental rights if not you chief justice sahib?” he said.

Imran Khan continued: “Today, chief justice sahib, I am asking you to take action and listen to Azam Swati’s appeal. Show that we are a society of humans and not animals. There is justice in human society … It is our right that we are given justice.”

Imran also named “General Faisal” and “Sector Commander Faheem”, accusing them of torturing Azam Swati in custody, and urged COAS Bajwa to “remove them” and initiate an inquiry against them. Deriding the two officials “committing cruelty in Islamabad”, he said while addressing Gen Bajwa that they were bringing “disrepute to the army, Pakistan and you”. “You should investigate them and transfer them,” he added. “The names Azam Swati took – since the day they arrived in Islamabad, [they] oppressed the people and media, threatened them, picked up social media people. “First they caught Shahbaz Gill, stripped him and tortured him and then Jameel Farooqui.” He also criticised the DG ISI, questioning his “apolitical press conference”. “You don’t target only Imran Khan in an apolitical press conference,” he said. Imran quoted Swati as saying that he would have “committed suicide if he was not a Muslim” and questioned the lengths of torture the PTI senator allegedly endured. “Human dignity is protected in the Constitution,” he said, imploring the chief justice of Pakistan to take action on Swati’s appeal and “show that we are a human society”. He reiterated that justice was a right. “General Bajwa, you must investigate these two people and transfer them,” he reiterated. Meanwhile, PTI leader Fawad Chaudhry has said the party’s long march to Islamabad has come to an end. He said it would resume on Sunday at 11 am from Muridke.