To be a specialist or a polymath

Waqas Ahmed’s recent book, The Polymath: Unlocking The Power of Human Versatility, discusses the value of having wide-ranging interests and argues that people should be encouraged to expand their knowledge and skills across multiple fields to address the complexity of 21st century challenges.

Ahmed is Artistic Director at the Khalili Collections, a painter who has degrees in Economics and International Relations, and is also a qualified fitness professional. He was a diplomatic journalist, publisher, investment promotion analyst in the Gulf, editor of the Official Reports for the Commonwealth Heads of Government Meetings, and visiting lecturer in International History at the University of the West of England. Ahmed is currently completing his postgraduate studies in Neuroscience at Kings College London, investigating multidisciplinary approaches to the research and treatment of chronic pain.

The New Arab: What is a polymath and why are they so significant in human history?

Waqas Ahmed: Simply put, a polymath is an exceptionally versatile human who excels in multiple seemingly unrelated fields. Some commonly given examples are Leonardo da Vinci who was an artist, engineer, anatomist, botanist, musician, and philosopher; Benjamin Franklin was a publisher, philosopher, scientist, and diplomat; and Florence Nightingale was a nurse, humanitarian, mathematician, and theologian.

Much of my work has been to explore how and why some of the most influential figures in world history-leaders, entrepreneurs, philosophers, artists and scientists-tend to be polymaths of one type or another. One of the reasons for this correlation is that they, consciously or subconsciously, use the diversity and synthesis of their knowledge to develop unique insights or creative solutions for complex, multidimensional challenges. This distinguishes them from lifelong “specialists” who focus narrowly on one particular field or a micro-subject within that field.

Isn’t subject specialisation necessary, as it is difficult to be a “jack of all trades?”

Jack of all trades is not synonymous with the polymath. Many polymaths I’ve researched were ‘masters of many trades,’ not because they were superhuman, but because they had a different mindset and approach to knowledge, work and life.

Insights and skills obtained from one field often allowed them to develop unique insights into the others, so they excelled at rates unimaginable to the narrow-minded specialist. The idea that pursuing various fields is inefficient or ineffective is therefore a myth designed to socially engineer and maintain a status quo that works only for those at the top of the hierarchy. Yes, specialisation is extremely important, but my definition of the specialist is markedly different to the one commonly accepted today.

The specialist is not someone who delves deeper and deeper, closing themselves off to the wider world, but is someone who looks further and wider to better understand the complexity of their specialism. In this way, the true specialist is actually always a polymath.

How has your book been received so far?

Thankfully, the book has received positive reviews from critics and media. The Lancet, Esquire, BBC, Forbes and the FT have either reviewed or featured it. It has received as glittering endorsements from some of the world’s most esteemed intellectuals and entrepreneurs. Feedback on Amazon and Good Reads has also been great, and the book is now being translated into other languages, including Chinese, Italian and Korean. 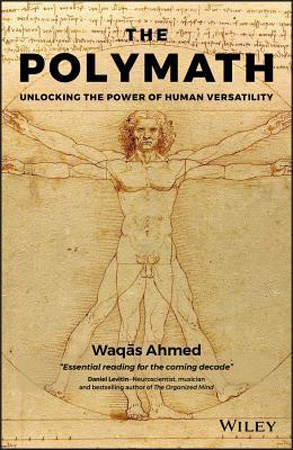 Most importantly for me though, the book and its ideas really seem to have resonated with many “lay” people, who have often approached me after lectures and talks, and on social media, to thank me for challenging the repressive culture of specialisation and for validating their intuition. It is most satisfying to know that it has opened people’s eyes to another way of thinking and being and has inspired them to follow their many-sided disposition.

You have written that Muslim polymaths such as J?bir ibn Hayy?n, Al-Khwarizmi and Al-Biruni were influential in the past. Who do you identify as a Muslim polymath today?

Sadly, my research, however limited, did not reveal a great number of genuine polymaths in the modern Muslim world. This may be a reflection of the cultural and intellectual dearth the Muslim world is experiencing vis-à-vis its more vibrant past. That said, the two who particularly stand out for me are the Iranian scholar Seyyed Hossein Nasr and Azerbaijani educationalist Hamlet Isakhanli. Nasr is a multilingual philosopher and poet, and one of the few scholars with a strong background in both science and comparative religion. Isakhanli is an acclaimed poet and mathematician as well as an educational entrepreneur who has also written books on the history and philosophy of science.

One might also consider the distinguished anthropologist, poet, playwright, film maker and diplomat, Akbar S Ahmed to be a notable polymathic figure.

You note in the book that the historical record tends to privilege male intellectual achievements, and despite some exceptions, most polymaths we read about were men. Are you aware of notable female Muslim polymaths from the past or present? If not, why is that?

Female polymaths most certainly existed in Islamic history, though evidence of them is much less apparent in literature than men. Some early al-Muhaddithat could be considered polymathic, and some like Lubna of Cordoba were known for being recognised polymaths of their time.

Whilst very few female polymaths emerged from my research of the modern Muslim world, this doesn’t mean they don’t exist. Many of them are simply not known in the public sphere. One example that does come to mind is the Egyptian activist Nawal El Saadawi; she is a physician, psychiatrist, novelist, playwright, feminist scholar, and an acclaimed writer on a number of cultural subjects.

Given the huge complexity of social, economic and political challenges facing many contemporary Muslim societies -what can polymaths offer today?

For this, a holistic, well-rounded education system that puts many-sided human potential at the heart of it must be the priority, an approach that ought not to be alien to the Islamic tradition, which in fact demands that one nurtures a curious, creative, holistic and reflective outlook. Indeed, this is the mindset that produced a culture that fostered polymaths, the likes of Al-Ghazali, Ibn Sina and Ibn Khaldun, who made tremendous contributions to scholarship and society. It’s really unfortunate that modern Muslims have forgotten or abandoned that rich tradition, and to the peril of their organisations, their communities and ultimately their own selves.

How does one become a polymath?

I always say that everyone originally was, and therefore has the potential to be a polymath. This is because whilst original human disposition is to be multifarious, this potential is ultimately squandered by a rigid education system, restrictive work environment and a social system that fosters a “stick to your own” culture.

Until these structures are challenged and ultimately dismantled, one must design their own learning frameworks and consciously curate their own career paths. In addition to maintaining and nurturing a childlike curiosity throughout one’s life, simple habits like questioning everything, seeing connections between seemingly unrelated phenomena, acquiring new skills and expressing oneself through various creative mediums will naturally make you more polymathic. If enough people developed the self in these ways, society and culture will eventually reflect this, which, in turn, would encourage the cultivation of more polymaths.

Tell us about the Polymath Festival that you have organised during April/May?

Following the book, leading cultural institutions, think tanks and educational establishments across London have been keen to explore how the concept of polymathy might be applicable to their worlds, so I created the Polymath Festival. Twelve events over two weeks, ranging from talks and creative workshops to art gallery tours and theatrical performances, it is a “festival of ideas,” designed to celebrate many-sided human potential and explore interdisciplinary solutions to complex world problems.

For those specifically interested in polymaths of the Islamic world, there will be a special event at Asia House titled Polymaths in Islamic Civilisation and Beyond on May 5, where I will be in conversation with renowned cultural critic and writer on Islamic polymathy, Ziauddin Sardar, and Peter Burke, the historian and expert on the cultural history of polymaths.

The Polymath: Unlocking the Power of Human Versatility by Waqas Ahmed is available now on Amazon

The interviewer is an academic who has written widely about British Muslims. He is the author of “Sufis, Salafis and Islamists: The Contested Ground of British Islamic Activism” and is co-author of “British Muslims: New Directions in Islamic Thought, Creativity and Activism”. He can be reached on Twitter @sadekhamid