After two years of unprecedented trade friction, the US and China finally conceded on a much-awaited economic and trade accord in the mid of January. The lately concluded “phase one” trade deal, a prima facie rapprochement is an augur of stability in the global markets and is expected to normalise trade relations between the two economic giants. The negotiations between the two major powers tried to brush off the concerns and issues that ostensibly triggered this ferocious trade war but as the clauses of the agreement suggest, China stays in an unfavourable position.

This deal marks an end, at least for now, to Beijing’s potentially damaging fight against the world’s top economy. It is often argued that the deal was essential for China as US being the largest export partner for Chinese goods, the tariffs substantially took a toll on the Chinese economy which suffered by almost 0.25% as the demand for Chinese goods in the US fell by one-third. Though the trade war did not do much good to both the countries but other countries benefited significantly through these strained relations. The punitive tariffs diverted almost $160 billion of global trade to other nations especially Vietnam who left no stone unturned to capitalise on this opportunity. Unfortunately, the Pakistani exporters failed to capitalise on this global trade opportunity that could have substantially increased Pakistani exports especially in the textile sector by manifolds.

This groundbreaking trade truce came into force from the mid of February and since then the Chinese economy is suffering a massive blow as it is in the grip of the harsh coronavirus outbreak. The anti-virus control measures are resulting in the closure of factories due to which Chinese exports are experiencing a slump. As per the most recent statistics, China’s global trade balance chipped over to an alarming $7.1 billion trade deficit for the first two months of the year. The exports declined by 17.2% to $292.4 billion as compared to the last year whilst the imports climbed up by a meager 4% to $299.5 billion. In a similar vein, the exports to the US plummeted by 27.7% in the first two months to $43 billion whilst the imports grew by 2.5% to $17.6 billion, but the overall trade surplus with the US stayed at $25.4 billion. 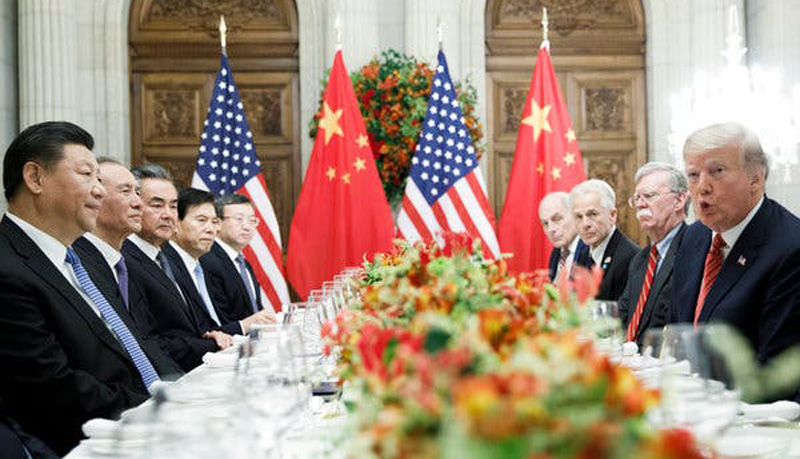 Owing to its economic dominance and supremacy in international trade, the United States has been able to divert the terms of the agreement in its undue advantage. The key takeaway of the agreement is the Chinese commitment of buying an additional $200 billion worth of American goods by 2021 and the reduction of tariffs on $75 billion US exports to China. The deal implies opening up of the Chinese economy to accommodate more US goods and loosening market access to American financial firms and car manufacturers. On the economic and political fronts, this substantial increase in US exports is advantageous for the Trump regime that is presently undergoing significant reforms to minimize the trade and fiscal deficit and fuel up the economy. If the stipulated targets are surmounted, the Chinese imports from the US will increase approximately by two-folds, and if China’s exports stay the same the US will be able to wipe out trade deficit with China. This diplomatic achievement and economic victory termed as “groundbreaking” by Trump Administration will help garner more public attention in the upcoming US Presidential elections 2020 campaign. The US allegations over the violation of intellectual property rights by China resurfaced during the negotiation process and the agreement is fairly contingent on the terms for safeguarding these rights if the two nations are to return towards normal trading patterns. Likewise, the deal is poised to expand US farm and energy exports in addition to handling long outstanding US concerns for maintaining the transparency in the currency exchange rate management. It is pertinent to note that China purchasing more US products will develop the suitable monetary and economic ties between the two biggest economies. For the Trump Administration, the mounting internal pressure for balancing out trade ties with China can now be placated and the two large economies can be easily be integrated.

In reciprocation, the US will slash the tariffs imposed in 2019 over $120 billion Chinese goods by half, while keeping those imposed in 2018 intact. Undoubtedly the US stands out as the winner in the trade deal yet the dividends for China emanating out of the deal cannot be completely overlooked. The recent policy shifts towards economic liberalisation is imperative to address the concerns of other major trading partners such as the ASEAN region which is demanding more transparency in the Chinese system. The negotiated deal is well-aligned with the new economic laws for liberalising foreign direct investment, proscribing forced technological transfers and allowing foreign-owned financial institutions to operate in the most populated country in the world. Importing more US products is advantageous for the general welfare of its local citizens who can now access these products at more affordable rates once these tariffs are truncated therefore keeping in check the cost-push inflation in certain sectors. Similarly, as the industrial giant is criticised for being a large emitter of carbon and greenhouse gases, it is a great opportunity to switch towards more renewable energy sources and import more natural gas from the US and cut down its coal consumption. This will help discharge the “carbon emission” commitment along with shaping up a positive image through climate protection initiatives.

At the very outset, the targets seem unrealistic, while China can perform its part of the agreement by diverting imports from other countries to boost US imports but the question remains on whether the US will be able to increase its fares by $200 billion in such a brief timeline. The major US exports to China include Soybean, civil aircraft, semiconductors, passenger vehicles, and aluminum is still in great demand as China looks around for more reasonable imports from Taiwan and the ASEAN region to reduce input costs for its local industry. In the current scenario, the US economy is experiencing maximum employment; except in the agriculture sector. This is the time that it can improve its efficiency through economies of scale to send out a favorable position. By far, it is revered that if the economic conditions stay the same, China may be unable to discharge its commitments for boosting US imports especially of $40 billion in the farm sector due to coronavirus outbreak.

From a bigger perspective, both countries need to foster an environment of independent and fair trade as per the guidelines of the World Trade Organisation. The Trump Administration is envisaging for the “phase two” of the trade deal to address any concerns left unattended in the first phase while China may spearhead more initiatives to establish its economic mastery in the post-globalised world.