Henry Kissinger, former US Secretary of State, once famously said, “It may be dangerous to be America’s enemy, but to be America’s friend is fatal.” None else would have felt the full force of such a statement in recent times, besides Indian Prime Minister Narendra Modi, who must have been shocked to hear US President Donald Trump blurt it out in a joint press conference with Prime Minister Imran Khan at the Oval Office last July that his Indian counterpart requested American mediation of the Kashmir dispute. In that same press conference, President Trump confidently declared that he was happy to undertake that role in order to help resolve the 72 year old dispute. This positive statement by an American President caused explosive shockwaves in India, with the Modi government then issuing a prompt media response, denying that their prime minister had made any such invitation. This was to be countered by President Trump in the following days, who stated that he was not making this up and that he had indeed been approached by Prime Minister Modi in this regard, on the sidelines of the G20 Summit in Osaka in June 2019. 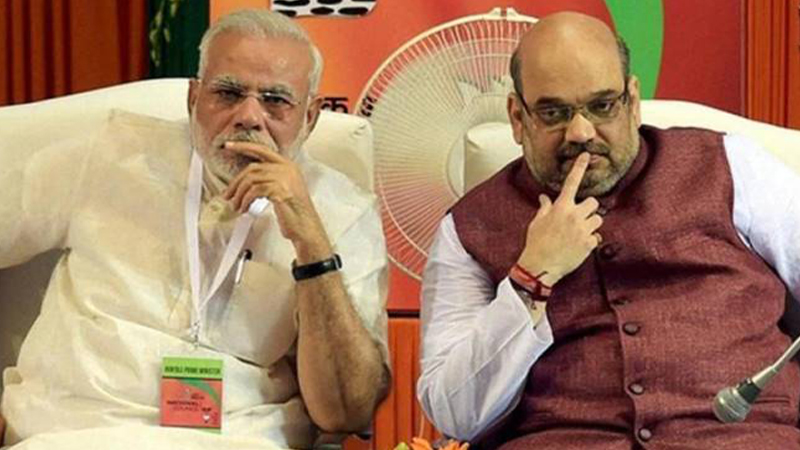 There was an ensuing uproar in the Lok Sabha-(Indian Parliament). To appease its extreme right-wing support base, the Modi government then rushed in legislation in the Lok Sabha on 5th August 2019, thereby scrapping Articles 370 and 35A of the Indian Constitution, in a blatant attempt to illegally annex Indian-occupied Kashmir. The Indian army had scrambled a further 38,000 troops in the draw-up to this controversial legislation, which supplemented some 600,000 Indian troops that had already been deployed in the Valley to help subjugate the free will of over eight million Kashmiris; making it one of the world’s most militarised regions. To add further misery upon the Kashmiris, the Indian government then imposed a total blockade on all communications-(telephone, cell coverage, broadband internet and cable TV) in the Kashmir Valley, which still persists to this day and has already lasted a staggering seven months.

As the veil of darkness descended upon the Valley, the Indian government then launched a violent crackdown on any dissent by arresting thousands of people. Even the Kashmiri politicians were not spared, as the Kashmiri leaders including Syed Ali Shah Geelani, Yasin Malik, Mirwaiz Umar Farooq, Mehbooba Mufti, Omar Abdullah were all rounded up and arrested on 5th August 2019. They remain in detention to this day. What ensued amongst this total blackout was the most severe form of human rights’ abuses perpetrated by the Indian security forces to date, which included, but were not limited to: the worst forms of torture, involuntary disappearances, sexual assault, arbitrary arrests and detentions, as well as the indiscriminate use of pellet-firing shotguns as a method of crowd control that resulted in countless civilian casualties.

The attempts by the UN observers as well as parliamentarians from the West, who wanted to visit the Kashmir region and observe the reality for themselves were all blocked by the Indian government; the most recent having been British MP Debbie Abrahams, who despite having a valid e-visa was not allowed entry and her visa was arbitrarily revoked without explanation. Similarly, US Senator Chris Van Hollen was also refused permission to visit the Kashmir Valley back in October last year, having been one of the fifty members of Congress who had expressed serious concerns over the situation in Kashmir. He did not hold back in his criticism, whilst being interviewed in New Delhi, when he said, “If the Indian government has nothing to hide, they should not worry about people visiting Kashmir and witnessing the situation with their own eyes.” Notwithstanding these withering criticisms, the Modi administration remained steadfast and continued to turn away foreign outsiders in their desperate hope to avoid the world’s condemnation of its illegitimate actions, under international law.

If one had thought that Modi would stop at the creation of the largest ‘gulags’ in modern times in Indian-occupied Kashmir, then they would have been sorely mistaken. In December 2019, the Modi Administration passed the controversial Citizenship Amendment Act, which offers amnesty to non-Muslim illegal immigrants from Pakistan, Bangladesh and Afghanistan. This controversial legislation was followed by the government’s plan to introduce a nationwide register of citizens, thereby targeting those who do not have documents to prove that their ancestors lived in India. Needless to say, this legislation caused a massive outcry throughout India for being exclusionary and violating the secular foundations of the Indian state.

To add further insult to injury, Modi then unleashed reptiles in his government such as the Indian Home Minister, Amit Shah and Kapil Mishra, who proceeded to whip up public hysteria against the Muslim population in the cities. This caused RSS-(Rashtriya Swayamsevak Singh) fanatics to go on a violent rampage in cities such as Delhi recently, burning down mosques and desecrating the Holy Quran. Muslims businesses, shop-fronts and properties were also set ablaze and their residents were dragged out into the streets to be lynched. Some Muslim families were burnt in their homes. The waves of violence and anti-Muslim pogroms continued unabated for days until mangled bodies lay outside on the streets alongside burnt cars and debris from burnt down buildings. Schools, shops, houses and vehicles were all torched by the extremist Hindu rioters. The death toll from this anti-Muslim violence rose to 42 dead and over 270 people being injured. The communal violence that had haunted the Indian subcontinent at the Partition had now returned back to the cities of modern day India.

The Modi government’s actions have only one parallel in modern history and that is the anti-Semitic legislation that was passed by the Nazi party in the 1930s, which segregated the Jewish people from German society and culminated with the Kristallnacht-(the night of the broken glass) on 9th and 10th November 1938. Over those two days, the Nazis launched violent attacks on Jewish businesses and places of worship, across Germany and Austria. More than one hundred Jewish people were killed and thousands of people were rounded up and interned in concentration camps. Firefighters were specifically instructed not to extinguish the fires burning in the Synagogues and Jewish-owned enterprises. Much like Adolf Hitler’s Nazi party based its beliefs on supremacy of the ‘Aryan’ race, the Modi government-(backed by the RSS) too draws its inspiration upon Hindutva ideology, which has sought for the complete domination of the Hindu nation across all of India. Modi himself has been a life-time member of the RSS since 1971. In the past two weeks, Modi and his henchman have sought to actively harvest the politics of division and hatred across India in their dream to achieve the supremacy of the Hindu nationalism over all other faiths. It is safe to conclude that Nehru’s secular India is now dead with the country now being in the clutches of a madman who will go to any length to ensure the realisation of his contemptible beliefs.

In complete contrast to the Modi regime, one must appreciate the steps that our prime minister, Imran Khan, has taken to ensure the rights and protections of all minorities in Pakistan. One of Khan’s hallmark achievements this past year has been the inauguration of the Kartarpur Corridor, which effectively facilitates visa-free access for Indian Sikhs pilgrims to visit one of their holiest sites in Pakistan, the burial place of Baba Guru Nanak. Tens of thousands of Indian pilgrims have already visited Kartarpur since its inauguration some four months ago. Such steps by our Prime Minister demonstrate his profound respect for people from all faiths and the Kartarpur Corridor has undoubtedly fostered people-to-people bonding in both Punjabs.

Coming back to Modi It is ironic how he proceeded to welcome President Trump earlier this month to Agra and Ahmedabad; both being cities that were extensively developed by the Muslim rulers of the Indian subcontinent. Whilst President Trump clearly expressed his willingness to mediate in the Kashmir dispute in a mass rally in Ahmedabad, it is sincerely hoped that he also admonished ‘America’s (bear-hugging) friend’ over his government’s divisive and miscalculated agenda; which if continued, would tear apart the social fabric, perforating the very soul of India.

The writer is a barrister and a political activist